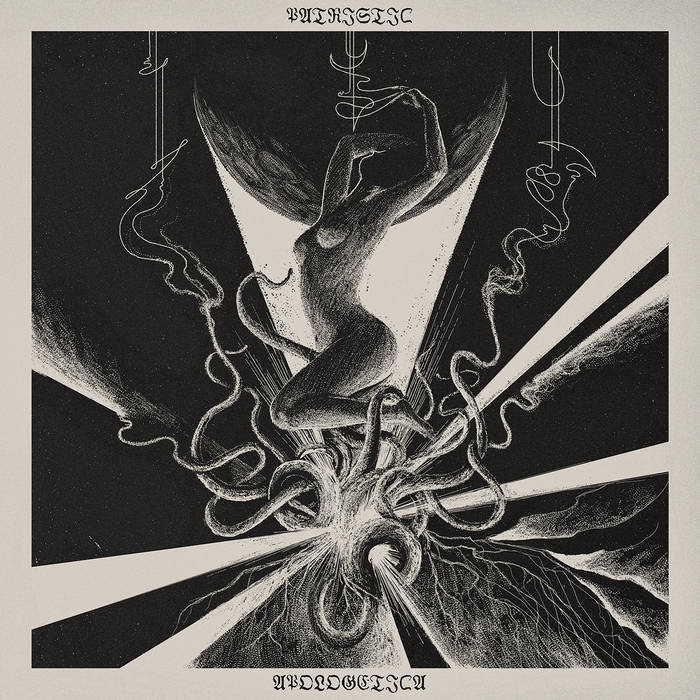 (Pulverised Records released the debut EP by the Raman blackened death metal band Patristic in early May, and our reviewer DGR liked what he heard, as you’ll see below.)

But that’s what we come here for right?

Patristic are a new black metal project, the union of SVNTH/Bedsore and Hideous Divinity band members into a dissonant and violent take on the blasphemous style. Hailing from Rome, Italy, the group pulls heavily from the city’s religious tradition to create their contribution to the overall hell noise. They describe the concept behind their EP Apologetica in this way: “The concept draws from the era of the Fathers of the Church. The decadence of the Roman Empire and the rise of the Christian philosophy in a world where pagan philosophy permeates the Western culture. An obscure age between classic world, pagan culture and the impending, threatening
shadow of the cross.”

Apologetica is only three songs, clocking in at about twenty minutes in length. It pulls mightily from the black metal world – especially its post relatives – in order to create a chaotic picture delivered in two eight-minute journeys and one three-minute battering. Put bluntly, the three songs on Apologetica sound like the apocalypse and Patristic are its latest harbingers.

The two heavyweights on Apologetica are its title track and its closer “Praescriptio II”. Both clear the eight-minute mark and make full use of the time. Some bands will often extend songs with long, drifting passages that rely heavily on atmosphere and less on the constant wall of instrumentation that one might associate with music like this. The temptation is certainly there for Patristic and they have roots in that style given its members’ other projects, but much of Apologetica goes in the opposite direction, prefering to overwhelm listeners rather than give them any sense of floating along in the noise the band create.

There’s rarely a moment to breathe here, and even though the EP is only twenty minutes long it’s difficult not to feel like you’ve gone a few rounds with the band by the time they’re done. Given that Hideous Divinity themselves are a kind of constantly moving death metal machine on their own, who often write songs that sound like you’re caught in the middle of an avalanche, you can see where the fusion of one of their members with someone deeply rooted in a post-black metal world might result in songs that are eight minutes of roiling chaos. In fact; “Preascriptio I” may be one of the better “album concept condensed into song” style releases out there, simply because it’s close to four minutes of sonic-maelstrom as opposed to eight-plus of madness and anguish.

As a first release from this new project, Apologetica is damned promising and one that doesn’t stick around longer than it needs to. You’ll recognize the fusion of both its member’s projects almost immediately from the dissonant crashes of guitars to the howled vocals that struggle to come to the surface amidst the wash of sound. Patristic draw a lot from their concept to create Apologetica. and the music jumps from black metal to dissonant death metal at the drop of a hat and rarely keeps its foot in one particular area for long.

This is music purpose-built to be as ugly as possible, and if you’re the type to dig for sonic terror – even on just a sheer overwhelming front – then Patristic‘s debut is a good one to dig into. It has certainly placed a mark on the band as something to watch in the future, especially if they seek to expand upon the musical nightmare they’ve created here in a full-length.

One Response to “PATRISTIC: “APOLOGETICA””