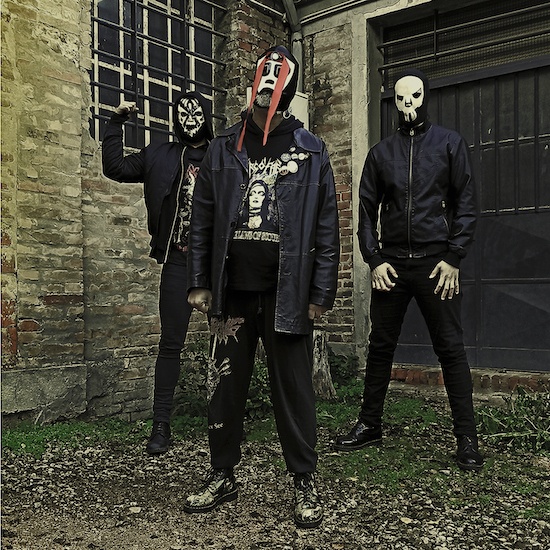 To be clear, we are not experts in Italian culture. Having said that, we must still express our surprise in discovering a trio of Italian death/grind punks whose lyrical themes are connected to pro wrestling, who hide their faces with masks connected to the Mexican lucha libre tradition, and who use stage names for themselves connected to the same tradition: El Terrible (drum/vocals), El Canibal (guitars), and Aidu Ientus (bass).

The connections of Crisis Benoit to the world of wrestling don’t stop there. They wrote the entrance theme for the Maltese pro wrestler Gianni Valletta (All Japan Pro Wrestling), for the Italian hardcore tag-team Urban Guerrilla, and for the Mexican extreme wrestling federation Zona23, and they collaborated with “Rise Underground Pro Wrestling” for a music/deathmatch show in Leeds (UK).

Is your curiosity piqued? Would you like to discover how these musical luchadors translate their inspirations into sound? Well, you should be, because their debut album El Culto De La Muerte is a hellish, harrowing, and often haunting experience, and one that turns out to be so musically multi-faceted that it keeps you on the edge of your seat from start to finish. 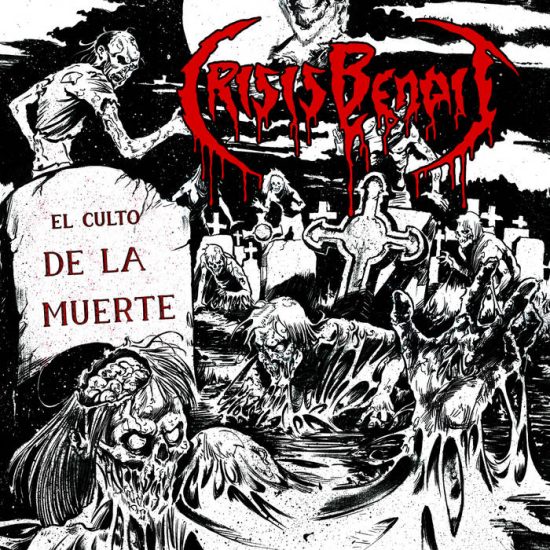 Crisis Benoit brawl and claw their way through a dozen songs on the album, most of them short swift body-slams, brain-manglers, and flesh-chillers in the one-to-two-minute range. And we should quickly add that the songs are just as influenced by extreme horror as by extreme wrestling, with song titles littered with references to coffins, corpses, and ghouls risen from the dead.

Crusted with abrasion, their riffs bray and gouge, seethe and swarm, drag and moan, jitter and jackhammer. There’s no song that stays in the same lane for very long. The tempos and moods change frequently, with drum rhythms that stagger and stalk, cavort and slug, or erupt in blasting flurries at the drop of a hat. And make no mistake, the band are very adept at infiltrating the songs with insidious melodies that get their blood-stained hooks in your head.

In company with those caustic, convulsive, and blood-congealing guitars, the songs feature a refreshingly prominent bass that bubbles and throbs in appearances that seem demented and occult, as well as macabre vocals that range from guttural bellows to vicious snarls and maniacal screams (plus a couple of well-placed samples).

The horror-prone lyrical themes are matched by the music, which creates ghastly and ghoulish atmospheres that shroud the band’s cavorting and careening assaults and their lurching graveyard shambles. Sometimes, those moods of horror descend into dismal pits of despondency and despair (most prominently in the album’s title track, which is the band’s longest and most powerfully mood-changing offering on the album), and sometimes they become frenzies of madness or manifestations of hideous grandeur.

To put it differently (and more succinctly), these songs display a flair for songwriting that should be taken seriously, even by those who don’t take pro wrestling seriously. And fans of horror should eat this up with both hands.

El Culto De La Muerte was recorded and produced by Carlo Altobelli at the Toxic Basement Studio and it’s graced by a cover by Ester Cardella. It will be digitally released on June 10th by the Milan-based label Slaughterhouse Records — and it’s available for pre-order now: