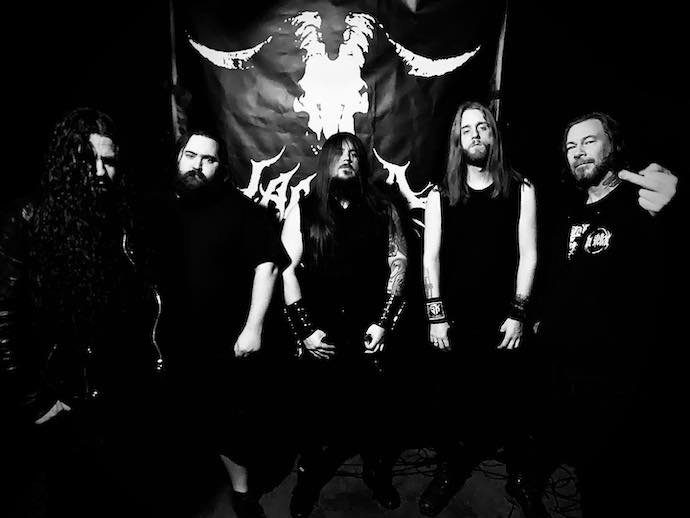 The metal band Lacabra from the Pacific Northwest brings together the talents of Lance Neatherlin (Lead Vocals), Eric Snyder (Guitar), Eric Weber (Bass/Vocals), Michael Anthony (Guitar), and Ryan Yancey (Drums/Vocals). All of them have been tried and tested in other bands, but it’s fair to say that in Lacabra they’ve caught lightning in a bottle. We’ve got electrifying proof of that in the single “Fractured” that we’re premiering today through a powerful video.

Lyrically, the song foretells a nightmarish future in which humankind’s own technological innovations become the agent of its downfall. That grim conception is captured in the animated segments of the video (created by Maria Nicheva-Wicklund of Bulgaria), which were inspired by Netherlin‘s “disdain for technology and how it makes us desensitized and numb to events that should cripple the human heart”, and by his attraction to the work of Lotte Reiniger, a German film director and the foremost pioneer of silhouette animation.

The video also captures the intensity of Lacabra‘s own live performances, and pairs extremely well with the turbocharged power and captivating dynamism of the song.

“Fractured” punches the pulse right away with flurries of fleet-fingered fretwork, spine-jolting grooves, and gritty snarls, but the song has other dimensions as well. In the pre-chorus, a fluid solo creates a mood that’s both scintillating and sorrowful, and then Neatherlin‘s singing voice rises in a display of spine-tingling passion, followed immediately by Yancey‘s blackened scream. The ensuing solo screams as well in a burst of pure fireworks, and then the song both jackhammers and spreads gloom again.

Just past the mid-point the music changes yet again as the drums briefly vanish and the music becomes frightening and unearthly. When the drums return in riveting fashion, those unearthly tones peal high overhead, the bass seizes attention, and the music towers and becomes sweeping in its haunting splendor, capped by one more dazzling solo. It does indeed seem to become a vision of the future, perhaps a blighted one yet breathtaking nonetheless.

The performance footage in the video was filmed by Zechariah Valette of M.O.B Studio in Seattle. As mentioned earlier, the animation and editing were done by Maria Nicheva-Wicklund of Bulgaria. As Lance Netherlin explains, the Russian invasion of Ukraine had begun at the same time as that work was commissioned:

“After speaking with Maria and her husband Matt, knowing the tension they were under with the threat of being possibly invaded, who knew what was going on at the time we told her to hold off on the video and no worries of course but she was adamant about doing it immediately, and the stress and creativity just poured out of her, she did an incredible job and went way above and beyond what we were hoping for.

“Lotte Reiniger was the inspiration for the animation and I think Maria nailed it without having to cut out every little piece of paper over multiple light boards…. I’ve always been a fan of Lotte Reiniger for years and we wanted to do something very different for this video. Video animation nowadays is so complicated and it’s almost sensory overload, which is exactly what we didn’t want for the theme of this video. We feel it turned out perfect.”

Lacabra are nearing completion of songs for their first album, which we’ll be eagerly awaiting. It was mixed and mastered by Gwen Kerjan of Slab Sound Studio in France. Label attention is welcome!

“Fractured” is being released across all digital platforms, including Bandcamp, where it’s available for streaming and download now: