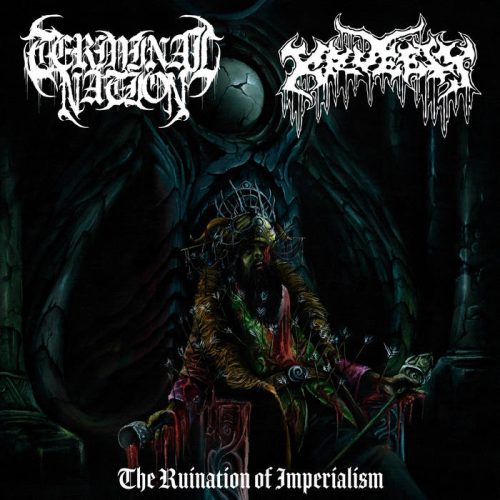 Let me tell you something, I have always wanted to do a split with another band. I’ve just never been able to get the timing right or find the right collaborators.

And “collaborators” is certainly the key word here, because the very best of these sorts of releases (and some are definitely better than others) have a real collaborative spirit to them – whether that’s in the form of bands covering each others’ songs, guesting on each others’ tracks, or simply inspiring each other to be better.

Case in point, the new split from the USA’s Terminal Nation and Japan’s Kruelty certainly showcases both bands at their very best, offering up five phenomenally heavy tracks of caustic, crushing and cathartic “Hardcore-influenced Death Metal” (or “Death Metal-influenced Hardcore”… the difference is largely academic) which are practically guaranteed to inspire both neck-wrecking bouts of headbanging and some serious civil unrest. 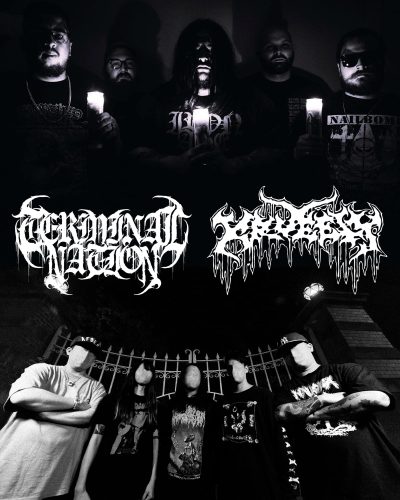 If you’re already familiar with both bands (and, if not, you should check out my reviews of Holocene Extinction and A Dying Truth ASAP) then you’re probably already aware that neither Terminal Nation or Kruelty like to pull their punches, and the music on The Ruination of Imperialism is no exception in this regard.

Whether that’s the gruesome, bone-grinding grooves and intense, unexpected industrial flourishes of “Curators of Brutality” (and if that hasn’t been printed on a t-shirt by the time I finish this review I’ll be very surprised) or the gut-churning, anxiety-inducing Doom-core of “Suppression” it’s clear that both bands brought their absolute A-game to this release, even if that’s just because they were afraid of being outshined by the other.

Both bands also display a nice amount of variety, despite the relatively short length of this release, with the shameless Swe-Death worship of “Sacrificial Capital” (replete with some suitably, and unapologetically, nasty lyrics about defenestrating the 1%) and the reckless, rattling gallop of “Under Your Pressure” demonstrating that neither group has an issue with putting the pedal to the metal when the need arises… even if they always, or almost always, bring things back to a brutish, back-breaking crawl eventually.

If you put a gun to my head I’d say that I have a slight preference for the Kruelty side of this split, although Terminal Nation‘s lyrics are particularly savage throughout, especially unapologetically vicious and venomous lines like “the only way you get to see heaven is if we stack the bodies that fucking high!” (from “Embalmed Crucifix”).

That being said, there’s very little in it, overall, especially since this sort of release is best viewed as a collaboration, and not a competition. Because, let’s face it, whenever bands get together to put out something this good, we’re all winners.