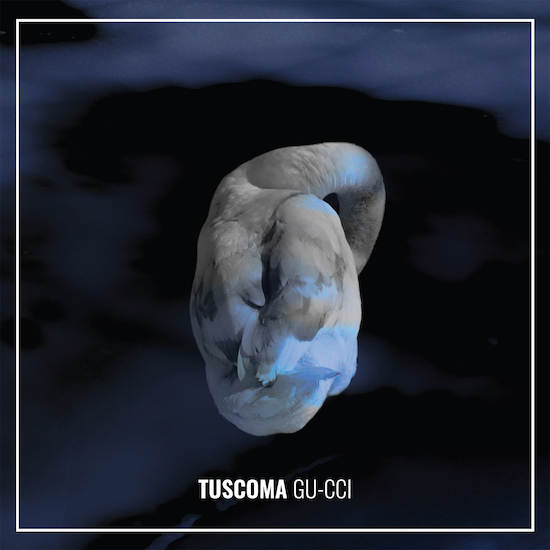 The title and lyrical themes of Tuscoma’s new album Gu-cci have little or nothing to do with the usual tropes of extreme metal. Anti-church tirades are missing, as are demonic invocations, troughs of gore, dank catacombs, the blaze of torches, or the brandishing of blades. They’re more poetic, more emotionally rooted, and never exactly spell things out.

Tuscoma‘s music on the new album is also itself unorthodox, bringing together elements from a range of genres, including black metal, post-metal, death metal, shoegaze, and hardcore. The results are monumentally heavy, powerfully turbulent, and emotionally fracturing. The songs become daunting, desolate, and deranged, coupled with rhythms that hit with concrete-splitting force. In other words, it’s not what you might expect from the album title or the lyrics.

Before elaborating on the sounds ourselves, we’ll begin by sharing a comment from Tuscoma bassist Craig Leahy: 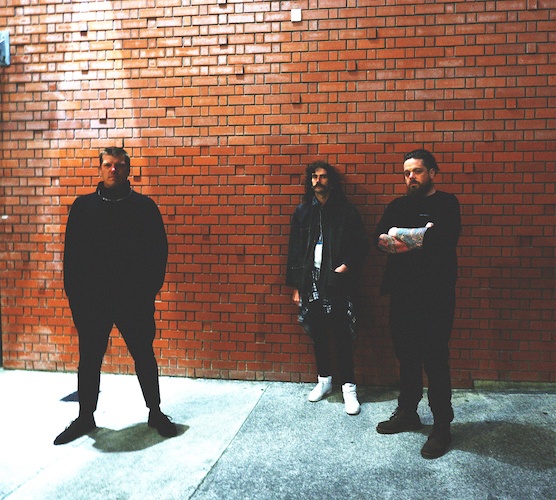 “Tuscoma have been firmly entrenched in the black metal world since our inception, with previous albums Arkhitecturenominus and Discourse comfortably sitting alongside the contemporary black metal releases. Gu-cci sees Tuscoma endeavouring to push the boundaries of what our fans have come to expect from us, and the genre. Weaving shoegaze textures, hostile noise, angular guitar riffs alongside death/black and hardcore rhythm sections, Gu-cci is our fuck you to the expectations of what a blackened band has to sound like. Our fans will be right at home with blast beats, harsh noise and familiar tortured vocals while being caught off guard by pummeling grooves, long form song structures and layers of textures. We couldn’t be more proud of Gu-cci and how it represents the mindset of us in 2022.” 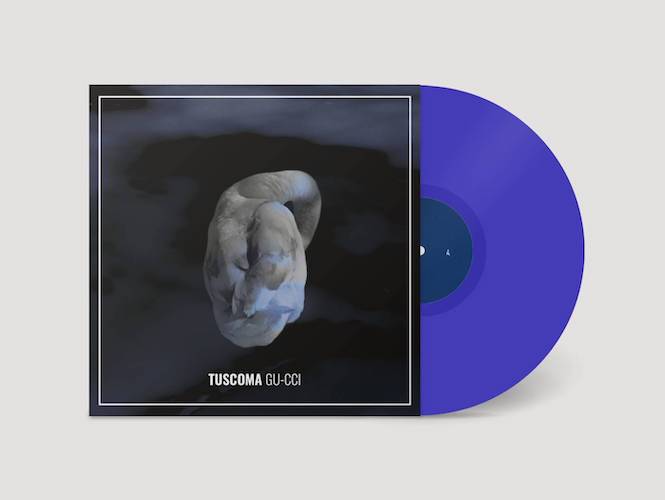 Brittle notes reverberate above earth-quaking bass lines and skull-popping drums in the opener “Emotions Divided By Lights“, with that uneasy opening melody carried forward in a mass of scathing riffage. Gloom saturates the music in abyssal roars and ominous chords, but fevers run through it as well, in senses-scorching screams and bursts of frenzied fretwork. The band heave and stomp, and cause the guitars to slash, to wail, to convulse along with the drums, and to create towering spectacles of oppressive foreboding.

If there’s one take-away from that starting track, it’s that Tuscoma are prone to ranging widely within their compositions, creating both varying shades of emotional darkness and dynamic changes in intensity. And this comes through again and again in the tracks that follow.

They prove themselves formidably capable of creating crushing audio earthquakes, firestorms of unnerving derangement, and visions of frightening eminence. The shrill, rapidly quivering leads within the disturbing tumult of “Impeccable” might put your teeth on edge. Your neck might feel like it’s cracking under the hammer blows of “The Importance of Being Vogue“, even as those wild shrieks and dissonant cries of the guitars roil your mind, and that big bass gets its teeth in your pulse.

What’s unmistakable though, as the band twist and turn, clobber and convulse, is a daunting emotional throughline. The moods of the songs veer on the knife-edge between danger and despair, between mental breakdown and mauling ferocity, between harrowing hallucination and avalanche upheaval. To push the intensity repeatedly into the red zone, the vocals remain never less than shattering in all their changing manifestations.

The album is not an easy listen. It’s meant to make you uneasy. But credit to the rhythm section for the power of the grooves, which keep muscles moving in the midst of such emotionally catastrophic assaults. And credit to the insidiously catchy nature of the guitar motifs that hold the songs together; they’re often like ice-picks plunging into the ear-drums, or the fires of raw panic, but damned if they don’t become addictive.

The record reaches its zenith of power in the long closing track, “Aris Dazed“. It’s as bleak as anything else on the album (maybe even more so), but the guitars ring like glorious chimes, frightening but captivating. The song creates visions of vast, panoramic sweep, magnificent terrors viewed from a shaking precipice that threatens to knock you off your feet (and give you a case of sore-neck syndrome as well).

The rhythm section unite to pound with grim, skull-fracturing force, eventually left to their own bruising ministrations when the guitars and voices fall silent. But that’s one of the few places in the song where you might be able to breathe deeply. Even when the lead guitar cries out in grief, and a layering of warbling and wailing tones bring visions of stricken spirits to mind, the earth still shakes beneath it, and shakes the listener’s spine too.

Landmine Records (the label formed by members of Blindfolded And Led To The Woods) will release Gu-cci digitally, on CD, and on vinyl on June 30th. It was recorded by Evan Pope at Studio 11b in Mount Maunganui, New Zealand, and it was mixed by Chris Johnson at Electric Bunker in Boston and mastered by Alan Douches at West West Side Music in Cornwall-On-Hudson, New York. It features photography by George L Clarke and design by Kurt and Olga Williams.

In addition to links for pre-orders and other info, we’ll leave you with the dates for Tuscoma‘s July/August tour of New Zealand and the official video for “The Importance of Being Vogue“.