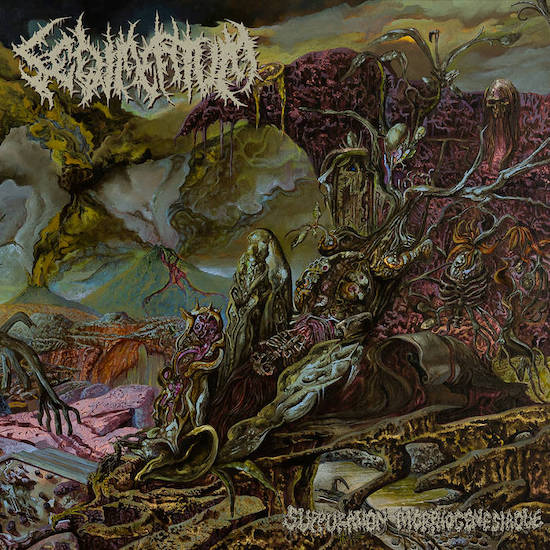 The Québec city band Sedimentum made their horrifying presence known within the most ghastly and gruesome realms of death metal through a pair of demos and a pair of splits released over the last three years, paving their way across subterranean plains of rotting corpses and crushed skulls toward a debut album that will soon be upon us. With the mouth-filling name of Suppuration Morphogénésiaque, it will be co-released by Me Saco Un Ojo Records and the Memento Mori label.

It’s hard to overstate just how stunningly destructive, barbarically crazed, and hideously foul this album is. Sedimentum use convulsive speed and overwhelming sonic power as their weapons — one of many weapons they bring to bear. With adrenaline-fueled execution they go fast. With corrosive distortion, a massive low end, and plundering percussive assaults, they brutally smash bones and ruthlessly scour the mind. With unnerving melodic ingredients they conjure nightmarish visions of cruelty and suffering. 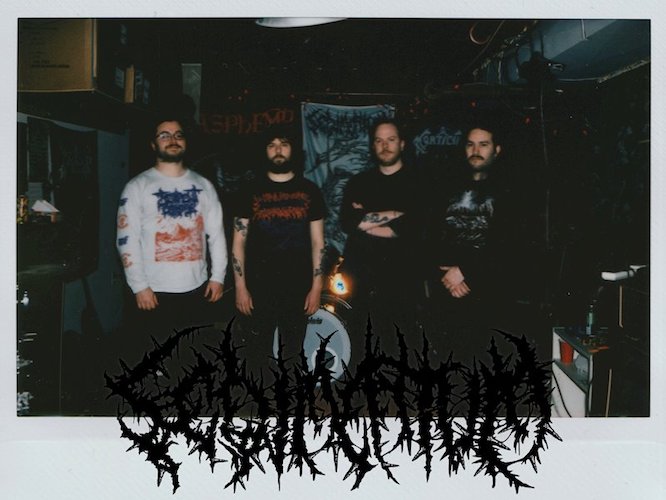 There is no warning and no mercy here. Sedimentum immediately create a Vesuvius-like eruption of ruthlessly scarring tumult, an explosive blast-front of severely abrasive chords, maniacally screaming leads, skull-busting percussion, and gargantuan growls that would cause the most lethal beasts to cower in fear.

The booming and battering drums at times become steady, but even then the dense, fleet-fingered riffage roils and mauls in breathtaking displays of violent insanity. It also gives way to stomping, stalking, and moaning manifestations of hideous grandeur and horrid agony.

The vocals gag and scream in addition to bellowing from abyssal depths, and there’s a piercing guitar solo that’s sheer frenzied lunacy, spiraling and seizing above a massive low-end movement that sounds like the heaving of tectonic plates, and then the guitar quivers and contorts in misery.

“Un Grotesque Panorama” is the second song to be revealed so far from this monstrously powerful album, and we’ve included a stream of the first one too. That one, “Funestus Manifestations“, is also titanically heavy and destructively berserk, equally capable of turbocharging your pulse and pounding your head into jelly. It creates the thrill of unchained ferocity, backed by a drum performance that threatens to steal the show — which is saying something, since this show is such a stunning display of shock and awe.

But once again, Sedimentum, loop in magnetic riff motifs that get stuck in the head, even though their emotional quotient is hideously demented. Learn that for yourselves:

The release date for Suppuration Morphogénésiaque is July 25th. Me Saco Un Ojo will handle the vinyl and tape versions, and Memento Mori will provide the CD version, and it’s available for digital pre-order as well. Credit for the gloriously macabre cover art goes to Brad Moore.