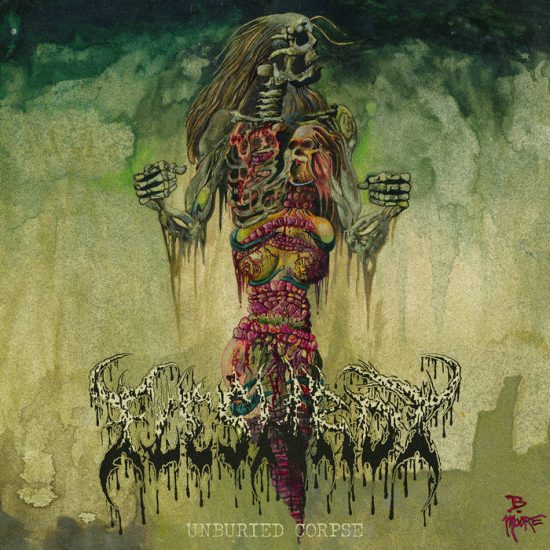 The signs are all there: The grotesquely macabre cover art. The oozing band logo. Song titles like “Wrapped In Entrails”, “”Intricate Dissection”, “In Filth and Pain”, and “Haunted Visions of Sick Depravities” (the song you’re about to here), and of course the band’s name itself — Fleshrot. One might add the photo of these faceless hulking Texans, which looks like someone found a lost tribe of Neanderthals and passed out band shirts, just before being clubbed to death.

These are all signs of devotion, a devotion to death metal of a particularly noxious and sadistically eviscerating variety, a fanatical reveling in excesses of violence, degradation, and horror. The signs are borne out by the music itself, captured in seven body-mauling, mind-mangling tracks which together make up Fleshrot‘s debut album Unburied Corpse, which will be co-released at the onset of August by Me Saco Un Ojo and Desert Wastelands Productions. 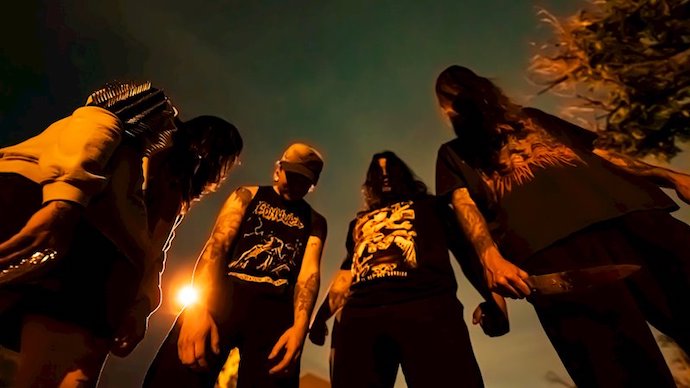 The song we’re presenting today, the afore-mentioned “Haunted Visions of Sick Depravities“, is the album closer, and what a ghastly and nerve-firing closer it is.

The riffage melds grisly chugging chords and gruesome whining tones, thuggish drum-clobbering and bowel-loosening bass-work, hideous growls and foul regurgitations. The song slugs damned hard but also jolts, scampers, and seethes like flesh-eating disease. And thus it’s an experience that’s primitive and bludgeoning but also fiendishly maniacal. The guitars sound like transmitters of disgusting toxins that want to eat you from the inside out — until a piercing solo wails and soars like a maddened spectre.

Eventually the song slows and becomes even more morbid and foul, and even more punishing to the spine. The music gouges and screams, pounds like megaton sledgehammers, and roils like a vat of viscera over a high heat. All the while, the vocals seem to erupt from the guts rather than the larynx.

Me Saco Un Ojo will handle the album’s release in Europe while Desert Wastelands will handle the USA. It’s available in multiple formats, and you can explore those via the links below. What you’ll also find below is a stream of the first advance track from the album, the deliciously mutilating “Intricate Dissection”.