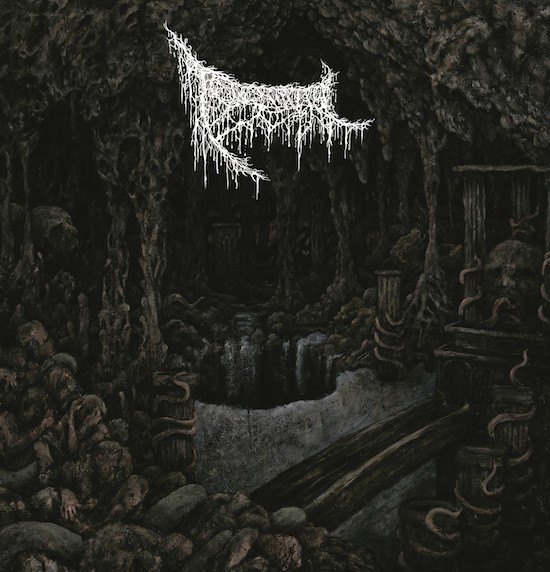 (Today we’re premiering a song from the forthcoming final album of Triumvir Foul, which will be released on CD by Invictus Productions and on cassette tape by Vrasubatlat on July 29th, with a co-released vinyl version to come soon after. Preceding the premiere stream we have Hope Gould‘s vivid review of the new album.)

Enter the racing drums, rumbling like the bones of an undead army as they clamor up the caverns of the deepest ossuary. A “Presage” indeed – the opening track to Triumvir Foul’s latest offering is the harbinger to something truly fetid.

The Portland duo have emerged from the tombs of Ur with another ode to the Exalted Serpents in the form of their latest, and quite sadly, final album, Onslaught to Seraphim. Despite being their last release, Triumvir Foul have done anything but gracefully bow out. They have offered up perhaps their most caustic material thus far; a killing blow to be lauded for, a subsidence crater in the wake of their destruction. 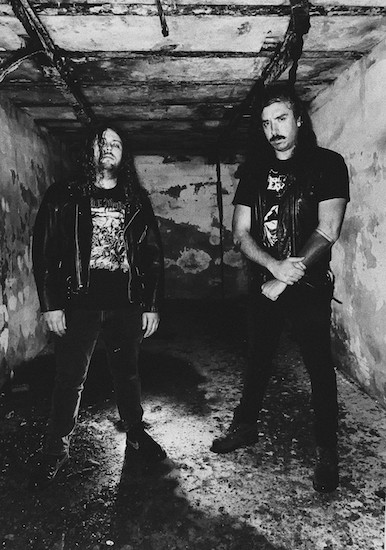 The cover art, crafted by the mighty Abomination Hammer, who provided the rottenly indelible art for 2019’s EP, Urine of Abomination, sets the tone nicely: a damp catacomb of horrors, embellished by snakes who have made the darkness their home forevermore. Fittingly so, this album seeps with decay, adorned by sinister serpentine leads that coil about sprawling riffs and strident drums. Ad Infinitum’s vocal performance is delivered with projectile vomit force, and I mean this in the most complimentary way.

Among the eight tracks, not a single moment is phoned-in – an intense listen from start to finish. This is largely due to drummer Cedentibus’ impressively tight double-bass and punctuated snare slathered all over the damn thing. Even still, the sharp production gives enough room to take (very) shallow breaths in the claustrophobia of it all. One will find fleeting respite in moments like the doom-laden groove on “Basmu Enthralled, Horned Creation,”  featuring tortured vocals delivered with a feverish prowess. The narrative spills and floods like a toxic sewage sludge (again, this is most complimentary).

Onslaught to Seraphim revisits some time-honored tricks: plentiful divebombs into spiraling solos that wind like frantic tendrils, and the crushingly hostile atmosphere sliced open by an abrasive blast to close “Serpents’ Gnash for War” (the song we’re premiering below).

The quieter moments conjure the deafening, nightmarish feel of Teitanblood and the jarring undertones brandished by the likes of Adversarial. Often, the chaotic calm is interrupted by buzzsaw guitars that provide a jagged edge to the reverb-washed foundation.

While they may not be for everyone, Triumvir Foul have never set out to be so. Fans of this style of pummeling death will find the apertures revealing the melody concealed in the seemingly impenetrable noise. The band has kept their signature asphyxiating approach, but the tightened production values nicely showcase a refined musicianship – a high note to step-off from.

Admirers of the band will notice this last album appropriately revisits the themes of their first album, 2015’s self-titled Triumvir Foul. We’ve been taken on a journey from fearful deistic reverence to the violent demise of the three Sumerian serpents as they wage heavenly bloodshed – thus the triumvirate will be laid to rest.  What better way to end a glorious rise of true death devotion than to end in a smoldering pile of war-torn ashes? Triumvir Foul’s wretched sonic waves will ripple for many spells to come, and Onslaught to Seraphim is a case in point of their consummate contributions to the underground.

To repeat, Onslaught to Seraphim is slated for release on July 29th with CD by Invictus Productions and cassettes by Vrasubatlat, with a co-release vinyl date to be announced soon. After the links we’re also including a stream of the album’s first advance track, “Flesh Diocese”.

One Response to “TRIUMVIR FOUL: A REVIEW OF “ONSLAUGHT TO SERAPHIM” AND THE PREMIERE OF “SERPENTS’ GNASH FOR WAR””