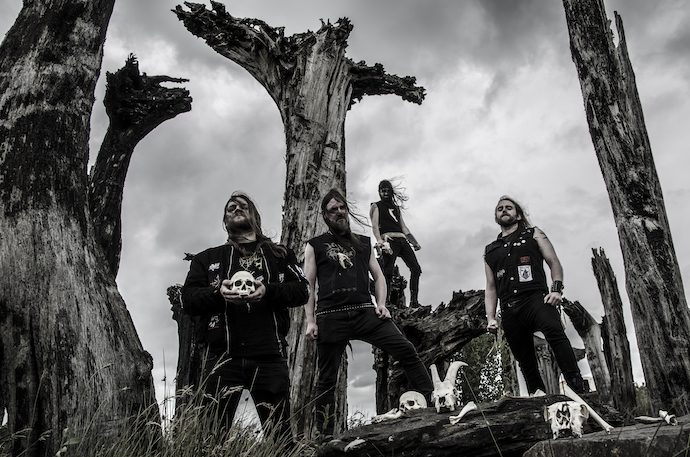 Even ears and minds that have been hardened by extensive exposure to the most extreme ravages of blackened death metal are still capable of being stunned by the music of the Irish band Coscradh. (Even the toughest callouses can be scraped raw and split open.) The eye-popping impact of their slaughtering talents was made evident from their first (self-titled) demo in 2016, and was renewed and reinforced through a pair of subsequent EPs (Of Death and Delirium and Mesradh Machae), all of them released by Invictus Productions. And now Coscradh‘s debut album is on the way, like a terrorizing, earth-shaking upheaval.

The name of this first full-length (41 minutes long), which the same Invictus Productions has set for release on August 5th, is Nahanagan Stadial. We are told that the title is an old Irish term for the rapid onset of a glacial period 10,000 years ago, which rendered life extinct: “A massive rise in oceans blocked out the sun, and coronal mass ejections and sunbursts hit the planet, overturning civilization, which brought a new ice age upon the island of Ireland”.

That choice of title is in keeping with the band’s entire aesthetic, both their devotion to the old language and history of Ireland and the summoning of catastrophe in their music. The band’s Irish Gaelic name itself (which we’ve learned is pronounced coss-kraa or cuss-kraa depending on the dialect) refers to slaughter or massacre, but such decimating visions would come to mind from the music alone, as you’ll discover from the album track we’re premiering today if you don’t already know. 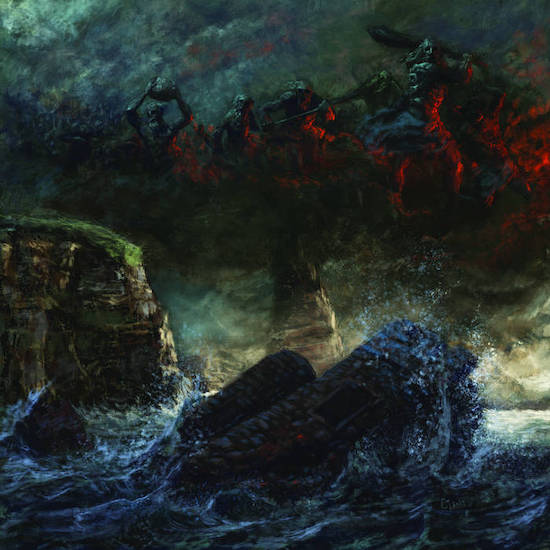 Many more insights about the band’s conceptual identity and the new album are available through a great interview of Coscradh founder Ciáran Ó Críodáin published in late June at the Brazilian zine Old Coffin Spirit (here). For example, there’s this discussion by Ciáran about the album’s striking cover art created by Khaos Diktator Design:

We did a pre-production back in 2020 and sent him this, and later some practice room videos with a lengthy explanation of the concepts behind the lyrics. He had free reign with the cover design, and it was completed before the final master.

It depicts the Cliffs of Moher. The song “Feast of the Epiphany” is about the great storm known as “Oiche na Gaoithe Móire” which was responsible for decimating the country. Tidal waves came from the west and are said to have topped the great Cliffs of Moher in Co. Clare, a part of Ireland with the most stunning landscapes.

It’s also a combination of the lyrics behind “Nahanagan Stadial” which was the sudden overturning of civilization wiping out the original hunter/gatherers with the arrival of a new ice age, reshaping the island into its current form.

The interview also identifies some of the many ingredients used in the album’s music, besides the usual instrumental and vocal weapons of war, including 12-string guitar, noise effects, sampling, theremin, an array of effects pedals, tin whistle, and Aztec death whistle. And then there’s this about the first advance track released from the album,

“Cladh Hàlainn” is an archaeological site of ritual death which has an unforgotten ancient folklore attached to it passed down for millennia. It’s located in South Uist in Scotland where Scots Gaelic is spoken. On this site there is evidence of druidic human sacrifice of four people. The song will be the only one written in this language [versus Irish Gaelic] because of the geographical location.

The album becomes more insane as it continues and we wanted this to sound completely wild as it progresses into side B, the Gaelic side. This song in particular is a human sacrifice ritual spoken in Scots Gaelic from the perspective of the Druid, a sacrifice to the gods under the stars with his profound Celtic understanding of the cosmos. The noise in the outro is from the Cassini spacecraft which flew by Jupiter and later recorded these sounds of Saturn’s atmosphere in the early 00s.

More could be said about the interview and the album as a whole, but it’s time to get to the main point of this article, the album track named “Plagues of Knowth” that we’re premiering today. Thematically, it’s an account of what possibly could have been one of the first plagues to strike the band’s native land, in the area of Knowth (the site of some of Ireland’s most famous ancient monuments).

The song runs for 6 1/2 minutes, and thus allows room for variation, but it is still relentlessly breathtaking. There is madness in the rapidly roiling riffs and shrieking strings, in the cacophonies of crazed screams and voracious howls, in the maniacal drumming and grand, blaring chords. It punches the listener’s pulse with reflexive compulsion and is equally formidable in its power to spin the mind with its violent ecstasies.

And yes, the music does sound ecstatic, perhaps especially in the soloing’s piercing lunatic contortions, even as it spills horrid visions of decimating disease and sanity-splintering fear. When the variation comes at the end, things get very strange indeed, like a sudden hallucination.

To repeat, Invictus Productions will release Nahanagan Stadial on August 5th, and it will leave a huge smoking crater when it lands. It’s available for pre-order now.