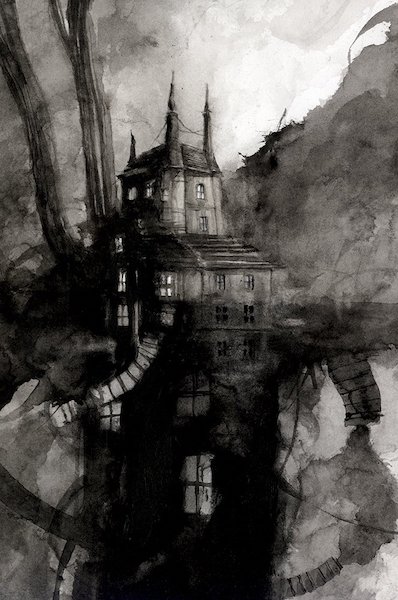 In the lead-in to that album we premiered a song named “Erhebt eure mit Blut gefüllten Hörner“, which managed to create an experience that was both hypnotizing and nightmarish, both hauntingly seductive and terrorizing. It was not alone in those respects, as we’ve been reminded by a new video for another song off that album. 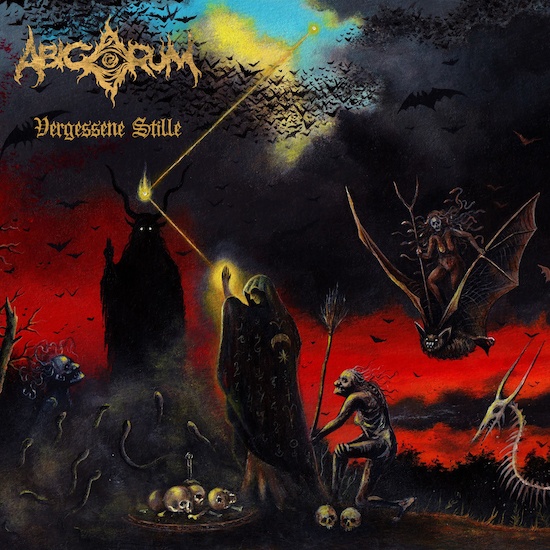 “Zerbrechlicher kleiner Geist” is in the nature of an extremely dire and daunting saga. As it unfolds, the music heaves and towers, stalking on heavy, bass-shod hooves and raking the senses as it goes through swaths of abrading noise and the clarion call of ringing guitars.

In the saga’s next chapter the beats become compulsive, and those eerily ringing guitars unfurl a beguiling folkish melody that put me in mind of Thy Catafalque. Still rendered in scathing tones, the synth-aided melody builds and becomes swaggering and majestic, even if tormented (though the acid-bathed goblin vocals, doubled for extra intensity, are even more so). This part quickly gets its hooks in the head (along with needles in the ears), especially when that ringing melody re-surfaces over bouncing beats.

In the final chapter, the music stalks again, drenched in gloom and fierce with pain (though the guitar still reverberates in gripping albeit corrosive fashion), inexorably moving toward some final catastrophe.

The accompanying video, set in a barren snow-cloaked wilderness, is swathed in shades of gray, ice-blue, and black, and it features a blood-stained woman not dressed for this place, there to take her own life. 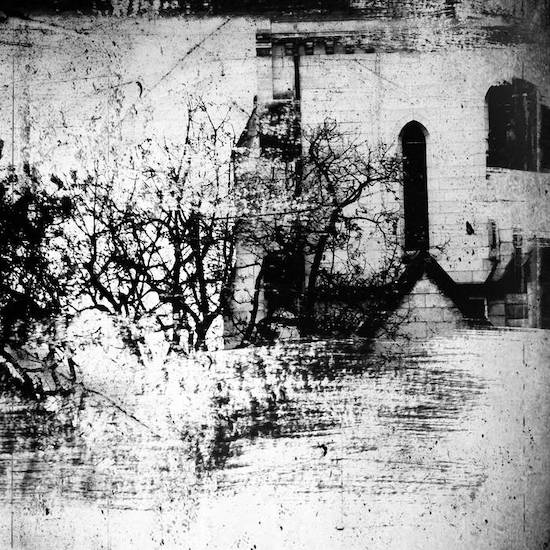 “Absoute” does a number of things with shuddering power. At the beginning, angels seem to sing in haunting, mournful voices, backed by slightly scratchy organ-like tones that deepen the funereal mood. Deep, dismal guitars scratch at the mind too, providing a brief segue into a storm of agony-infused riffing, sheering synths, fanatically plundering drums, and spine-scraping shrieks.

The pain-driven lunacy of the music is palpable, almost too much to bear, even when the chords begin to heave and moan, the synths wail like stricken spirits, and the drums tumble and boom. A few moody notes make for a very brief reprieve, and then the slaughtering torment resumes in full force, abrading the senses and ruining the emotions again. Through big primordial drums and apocalyptic chords, the music becomes momentous and towering in the scale of its ruination, and it sounds like the heavens are being incinerated.

At the end, haunting moodiness returns as eerie synths convey us into the remnants of that burned heaven and an acoustic guitar reveals its somber grief.

Misery is the solo work of Fille de Misère, aka Thomas Bel, the founder and owner of the Distant Voices label, which has released this single on cassette tape along with a shirt that proclaims “Pain Is Art”. 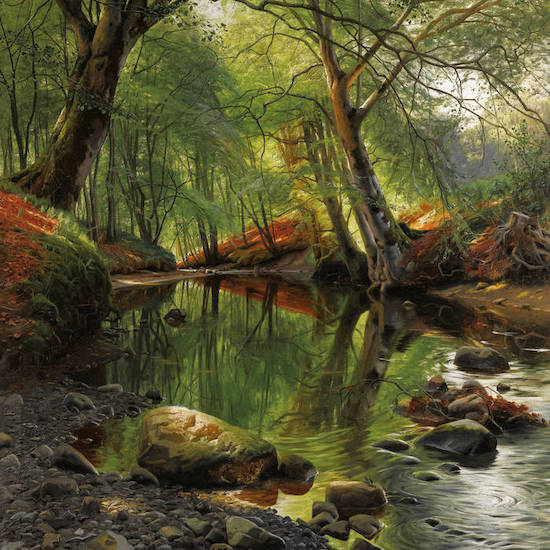 Last week I devoted a lot of attention to the first advance track from Raat‘s new album Celestial Woods, a compelling song named “Silver Sphere” that drew me into the poetry of Lord Byron and Shelley. And that’s not the only reason why I’ve gradually come to think of Raat‘s music as “poetic black metal”, though the phrase “romantic/tragic black metal” has also popped into my head.

The second single from the new album, “Carpe Noctem“, has also now surfaced in recent days, and like the first one it too has captivated me. It’s a diverse and dynamic track that in the following ways creates sharp juxtapositions across its nearly 11-minute length:

Blasting drums, sandstorm riffage, and tortured screams crash into magical ringing arpeggios, abruptly interrupting their mesmerizing effects. Sweeping synths wash across those sonic typhoons in soaring waves, and just as abruptly the music softens and rings in wondrous celestial vistas above ambling and bursting drum beats, and then cascades into the stars.

The music begins to pulse and to quiver in magnetic fashion, threatening to create another spell, until that one is also smashed to smithereens by another eruption of extravagant intensity and vast scale, suffusing the senses with an atmosphere of glory twined together with despair.

The juxtapositions continue, with small moments of ethereal poignancy and pulsating vitality appearing like winking stars, but the music continues to explode and overwhelm them in novas of blazing cinematic beauty and wrenching vocal torment.

Once again, the lyrics are eloquently poetic, this time the work of Raat‘s sole creator. They are harrowing and yet embrace “a lust for the unknown”, “as the howling end becomes the forbidden hour forever”. 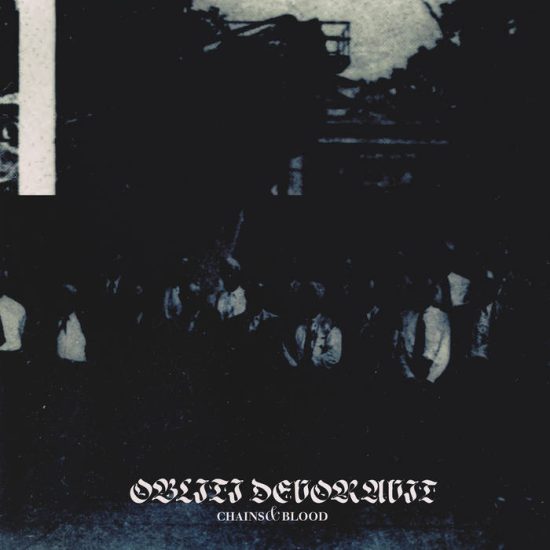 Finally, I’m recommending an EP named Chains & Blood by Obliti Devoravit, which is the solo work of Michigan artist TL (Tim Lenger), who along with A Pregnant Light‘s Damian Master is also a member of Aksumite.

In the EP’s opener, “”S.B.T.C.O.S“, heavy hypnotic rhythms, ethereal shimmers, and brittle crystalline notes collide into abrasion and feedback, and then that track seamlessly flows into the second one, “Agonizing Repulsion“, a stalking behemoth of sound, punishingly heavy in the low end, and skies-on-fire in the sounds above.

This time, scalding screams echo out, fighting through a jolting bassline and anguished emissions that sear the mind. The music seems to wail in waves of shrill, tortured extremity as it crashes and crushes, hammers and heaves, and it expands in scale, creating a sweeping panorama of subterranean upheaval and emotional calamity.

Again without pause, “No Rest or Warmth” ends this harrowing yet hypnotizing excursion. This time, those immense low-end frequencies take us on a thundering gallop, accompanied by clattering drums, feverish swirls of acetylene-torch fieriness, and unhinged screams so intense that they seem to convey a crazed resolution: after this, I’ll never need my voice again.

The bass pulses and cavorts too, connecting with a convulsive back-beat and raking guitar distortion to get your head moving, but it’s the squeal of feedback and a moody piano arpeggio that provide the song’s culminating expressions of collapse.