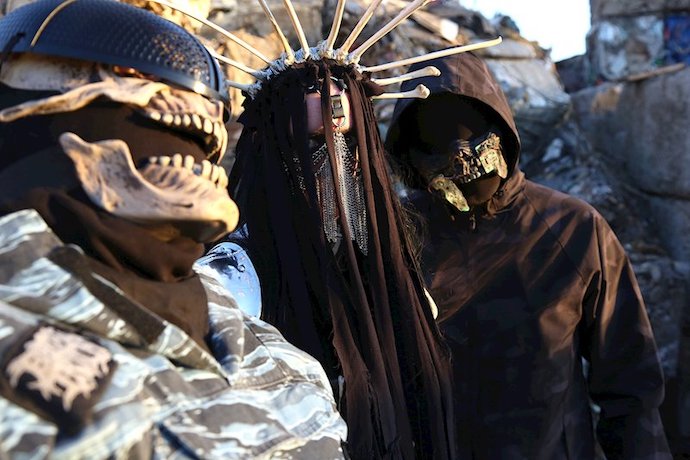 “A New Zealand-based grindcore/power electronics trio that take grindcore and fuse it with jungle, power electronics, and distorted sub-bass stabs. Imagine Atari Teenage Riot vs Napalm Death or Full of Hell and you’re halfway there”.

That’s the come-on we received for the new music of Bloodbox, a grotesquely masked trio who’ve bounced around the world and now seem intent on bouncing the world around, and cutting it up with knives. We’re told that after the dis-banding of the New Zealand based experimental death metal act Vext in 1999, the core members (CyZERNOBrG and Megalith X) moved to London and eventually to Ireland, and that during that time they were inspired to push their music in a more radical and chaotic direction, and in early 2001 Bloodbox was born.

The members made a return to New Zealand in 2003, performed a handful of shows and fests, but then went into hiatus around 2013. CyZERNOBOrG became the key vocalist for death metal outfit Forced to Submit, while Megalith X continued to produce what he coins “deathjungle” for his label Headwound Recordingz. But in 2021, Bloodbox was reborn, and the original duo eventually expanded to a trio through the addition of she-demon vocalist Sacrist D’Aeth (formerly of infamous NZ Black Metal outfit Skuldom). 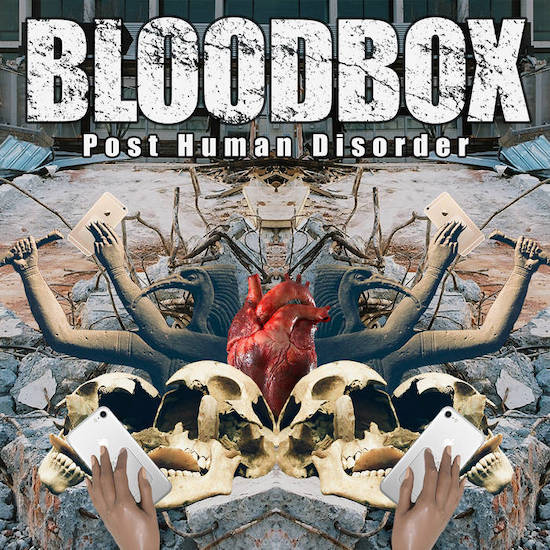 Bringing “breakbeat grindcore” into the current age, they’ve created an album named Post Human Disorder, which is now set for release by Headwound Recordingz on August 26th. Produced and recorded with a host of digital and analogue tech, it deploys a triad of vocals that weave tales of pain and injustice, power and corruption, sex and death, coupled an array of discomforting, confrontational, and convulsive sounds.

Lyrically, the songs run a gamut that includes responses to Covid 19 (“Project 19”), personal mental health (“Problems”), corporate control over indigenous assets (“Turn the Tide”), and, in the case of the song whose video premiere we’re hosting today, consumerism and overpopulation.

The name of that song is “Eat Rape Populate”. 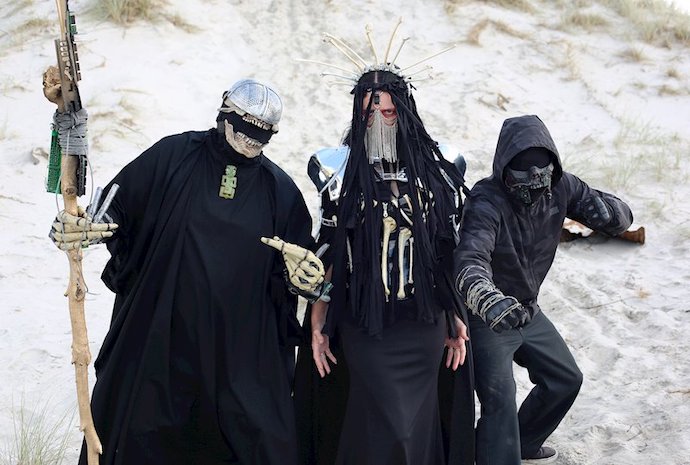 The opening of the song sounds like a twisted air-raid siren going off, which is a fitting warning that it’s time to take cover. Rhythmic bombs start dropping, an audio version of toxic gas spews from the speakers, and ears get shredded by rabid barks and lunatic screams.

The pulverizing detonations don’t follow the straight course of a bombing run but start and stop, shift tempos, and become long, thudding, lo-frequency reverberations. Lots of other fiendish happenings will also throw you off-balance: Pounding grooves and clattering snare-work surface and disappear. Wordless choral voices echo from the depths of crypts. Seething sounds seer the senses. But the main vocals remain as ferocious and unhinged as ever.

Post Human Disorder was mixed by Cam Sinclair (Diocletian, Stalker, Bridge Burner) at his Dynamic Rage studio in Auckland, and it was mastered by the mighty Brad Boatright at Audiosiege in Portland, Oregon. It’s available for pre-order at Bandcamp (cassette tape and digital formats), where you’ll also be able to stream the album’s opening track, “Project 19”.