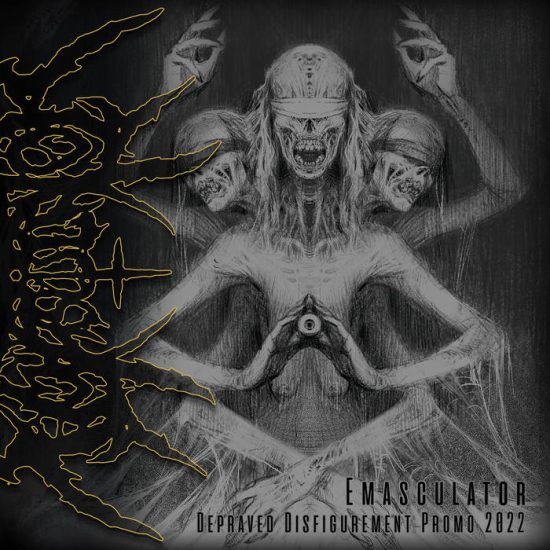 (It appears that DGR has become captivated by the recently released debut demo from the brutal death metal band Emasculator, and he explains why in this review, hopefully with gonads still intact.)

Let’s try something shorter for a little bit, huh? Especially since we seem to have been caught in a vortex of hour-plus releases recently.

The world of brutal death metal remains as lively as ever, with musicians willing to forever add to the endlessly squelching pile of musical gore that is the endless barrage of drumming, literal guitar shredding, car-engine bass tone, and earth-rumbling vocals that the genre entails. Emasculator represent a recent addition to the pile, comprising musicians based out of the US and Czech Republic, issuing forth their first demo Depraved Disfigurement at the beginning of August. 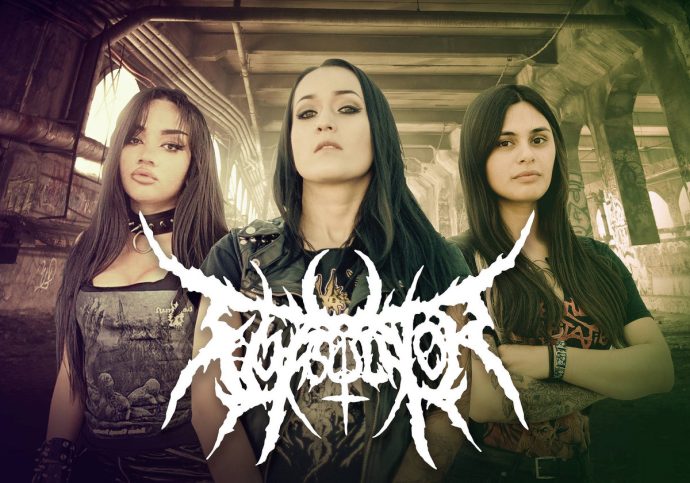 Of course, this sort of thing doesn’t just crawl from the sewers out of nowhere, and when you consider that the band counts amongst its ranks the former vocalist of the now-split Abnormality and a member of Cartilage – both of them groups that have skated across the surface of this site – you could understand how even just a demo could attract some ears. If nothing else, given its band members’ collective works elsewhere in the metal scene, we expected to be easily kicked around the room as if fighting a championship kickboxer for the eight minutes the demo lasts.

One thing is for certain upon pushing play: You’re not going to mistake this for anything other than the brutal death genre. Every riff and rhythm section part within the opening segment of the “Depraved Disfigurement” song is written as if it were a meat hammer. The vocals remain suitably low throughout the entire song as well, happy to let an increasingly discordant bass guitar strangle the life out of everything around it. Of course when you’re writing music that is prone to fist-fighting walls, you’re required by law at this point to just put a rock-breakingly dumb segment of guitar chugging dead center of the song, which Emasculator are more than happy to do before cycling the song back around into its initial hammer-studded-with-nails form. That the song fades out suggests there is some alternate universe in which this beating goes on forever.

“Age Of The Goddess” is the more sudden of the two tracks. “Depraved Disfigurement” spends its intro stating ‘this is our bludgeoning instrument, this is how it will bludgeon you’ before becoming the expected violence-wall. “Age Of The Goddess” broadsides you with its opening assault and works very hard to maintain that momentum for much of its run time. It’s the song that gives itself over to the more technically-complicated side of brutal death metal for a few segments. It may only run ten seconds shorter than its predecessor but it sure does have a lot more stuffed within its musical bag.

If this demo is serving as proof-of-concept for Emasculator, then the opening song was more than happy to be one-dimensional and single-minded in its death metal beatings. “Age Of The Godess” is just a storm of artillery, with Emasculator exploring the possibility of going full-nuclear on a song just to see what glowing bits remain at the end. There’s one moment dead center of the song where it feels like the track was actually ending for a brief bit, before it shocked itself back to life and continued to destroy whatever living space it had smashed into when it introduced itself.

Depraved Disfigurement benefits, though, from having a trio of musicians who are already operating on a high level. It is a demo that sounds better than some group’s EPs and full-lengths. You could almost view it as a two-song single release if you didn’t have the sense that Emasculator are likely going to expand upon their offerings here. As an exercise of ideas and explorations of places to go, they already inhabit a suitably heavy place within the brutal death metal maelstrom of sound.

Moving forward from the Depraved Disfigurement demo, Emasculator could approach things in a couple of ways,  and which track Emasculator choose to put their death metal train on could be a fun one to watch. The foundation and justification for its violence is already there, now the fun will come from watching just how many different approaches and spins the band decide to put on it.

One Response to “SHORT BUT SWEET: EMASCULATOR — “DEPRAVED DISFIGUREMENT””