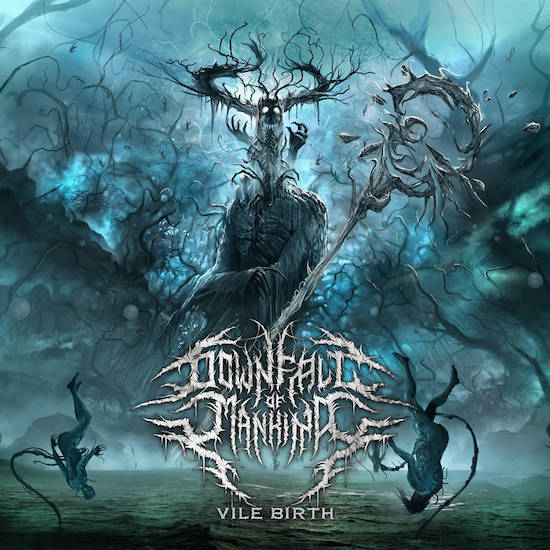 (DGR catches up with another release from last spring, and this time it’s a new album by the Portuguese maulers in Downfall of Mankind that was released by Lacerated Enemy Records in April.)

Blame it on the combo of Hurakan and Sensory Amusia both releasing on Lacerated Enemy, blame it on the absolute need for something that doesn’t really challenge the listening tastes, blame it on work. Whatever the reason is, I’ve found that lately the shorts/muscle-shirts scene of the prefix-core genre has been incredibly kind to me.

Granted, there are a few of us at NCS who are pre-disposed to having a taste for this sort of stuff, and while we happily highlight some of the more artistically challenging bands out there and our premieres can cover enough sub-genres of the metal world so as to orbit the planet seven or eight times, there’s a case to be made for a well-followed blueprint. That, and having a triplicate of beatings from that scene and also knocking another off the April releases that found its way into the personal review archive. We all have our reasons.

You can guess pretty easily what sort of circles Portugal’s Downfall Of Mankind run in just by glancing at their logo, but also from the rotating list of guests that join this particular batch of bruisers on their latest release Vile Birth. This is an album where the only challenger in terms of loud breakdowns would be a recording of the side of a highway. 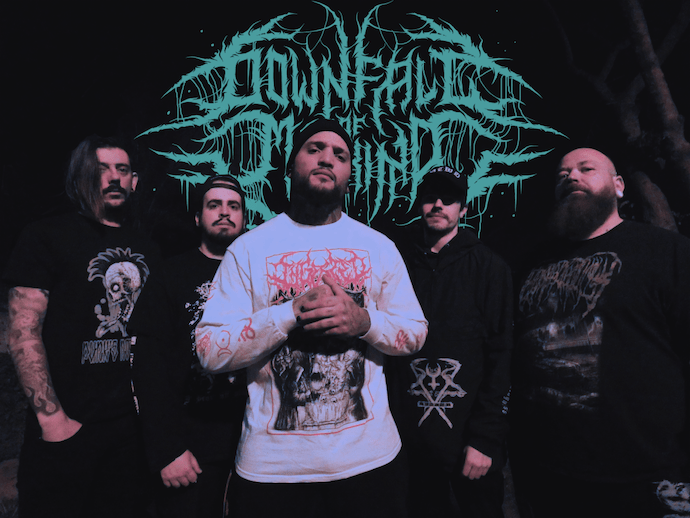 There is some star-power in play here. How can the eyes not be immediately drawn to the appearance of Benighted‘s Julian Truchan on the title song? “Vile Birth” locks both vocalists into a duel whenever the chance appears. Much of the heavy lifting within “Vile Birth” is handled by Downfall Of Mankind‘s vocalist Lucas Bishop, but there’s a healthy contribution on the guest front and the two are more than happy to do battle as the song seems to get more dense with each passing minute, adding more and more to it until the final moments are sound-solidified enough to put cracks in concrete.

To be fair though, the immediate follower “Altered State Of Consciousness” shows that perhaps the guest appearances throughout are more in an amplification role than one meant to really differentiate the songs, because even just the band themselves are capable enough. At sub-three minutes, “Altered State” launches at high speed and maintains a narrow-minded focus on pushing the band forward into the next big beatdown. The two-minute mark spices things up a bit by adding a layered melody over the top of the brutal ceremony that the song becomes. That could be said of the whole middle section of the Vile Birth album as a whole, when each song is more than happy to start out insanely heavy, only to pause for a brief moment before throwing a couch into the wall.

That’s the essence of Downfall Of Mankind as a whole though. Every song within Vile Birth is written to be an Earth-wrecker. They come in different flavors but it’s all iterations around a rigidly defined form, so there is a throughline running through every song. Downfall Of Mankind keep things tight too, with songs staying pretty close to the three- and five-minute range. The music can get expansive but for the most part they aren’t going into full prog-lengths and generally don’t let each guttural issuance stick around for longer than it needs to.

It says a lot when the opening track “Beneath The Aftermath” is the longest song here, and part of that is due to it serving as an intro as well – which is partially appreciated because at least there’s no song called ‘intro’ that is thirty seconds long. “Murderous Manifesto” creeps up as the next closest but that one also gets a lot of mileage out of ominous keyboard work that hovers in the background of the song in order to do the melodic heavy lifting while the band themselves are lining up the next batch of rumbling guitar segments and high-low vocal interchanges. What else are you to do, though, when you have a rhythm section more than happy to supply the appropriate low-end hammerings to keep things moving forward? You become a never-ceasing action of slamming into the floor again and again and again.

After all that, will Vile Birth score high on the originality meter? Probably not. It’s hewing pretty close to the current scene blueprint of hybridizing symphonic death with the beefier guitar chugging of their core brethren, as that is the current vein that is being tapped at the moment. Where Downfall Of Mankind do have an appeal is in their execution. Every time they get the chance they show that they are absolutely and sincerely 100% bought-in to their bullshit. They bruise knuckles with the best of them, offer brutality in the same shades as a lot of their record label brethren, and although they have a symphonic element in their music, they keep it pretty subdued in comparison to some of their more bombastic peers.

Vile Birth is a release built for the punching bag since it revels in throwing its weight around for nine songs. Zero-pretense and all purpose-built for a singular objective. Is it a world-changing release? Nah, but it is good for those moments when the change you want to see in the world is to witness it essentially being split in two. Sometimes, that single-mindedness is appreciated.