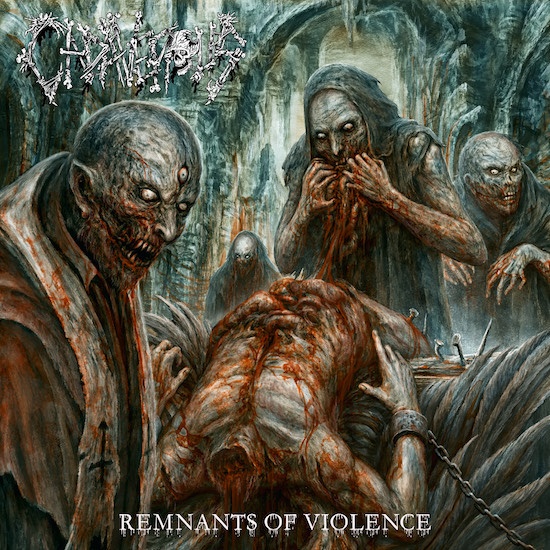 Although the Indianapolis death metal band Cadaverous only came together in 2021, this trio — guitarist/vocalist Jesse Curtis, bassist Alexander Farrington, and drummer Dre Duarte — have wasted no time in making their ghastly presence vividly known.

Their three-song debut EP Slam The Coffin Shut garnered heaps of praise from metal outlets and fans, and their gigs have included opening for such acts as Mortiferum, Obituary, Gruesome, 200 Stab Wounds, Kontusion, and more. Now they’re poised to build on that success through the September 23 release of a debut album named Remnants of Violence.

The horrifying cover art which we’re revealing today is a strong clue to the kind of gruesome and gore-stained music Cadaverous are making their own, but we have an even more startling clue in our premiere of a performance video for a single from the album, fittingly titled “I Want To Kill“. 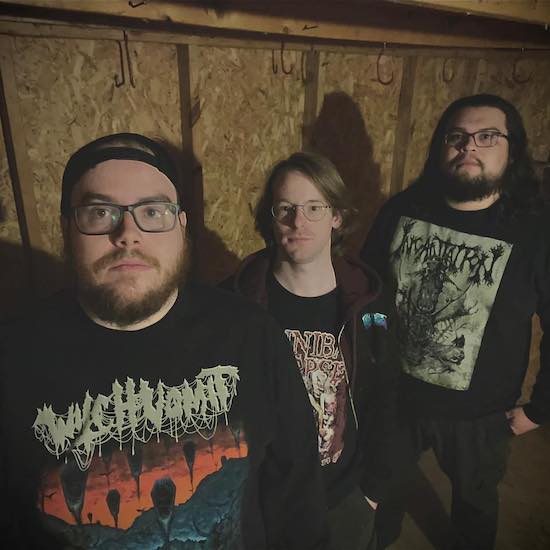 Cadaverous set the stage with a chilling audio clip voiced by a serial killer, and then launch into a frenzy of sizzling and squirming fretwork, battering drums, gravel-chewing bass-lines, and vicious, imperious growls. As fingers fly and the rhythmic patterns repeatedly morph, the band create sensations of madness and cruelty, but also slow the pace to bring in dismal and diabolical melodies, heightening the horror, and add fuel to the song’s freakish fieriness with a crazed, swirling guitar solo.

And if that’s not enough to peak your interest, Cadaverous also morph their way into a clobbering breakdown in which the guitar slithers like a serpent and moans in agony, creating an atmosphere of disease and rot — as a prelude to one last mosh-worthy spasm of high-speed insanity.

And so with this one song Cadaverous immediately generate an eagerness for the album as a whole, proving their ability to crack skulls and electrify the listener’s pulse with their technically impressive performances, while simultaneously spawning visions of grisly violence and hideous hopelessness.

Keep an eye on the links below for more info about the release of Remnants of Violence and how to pick it up.