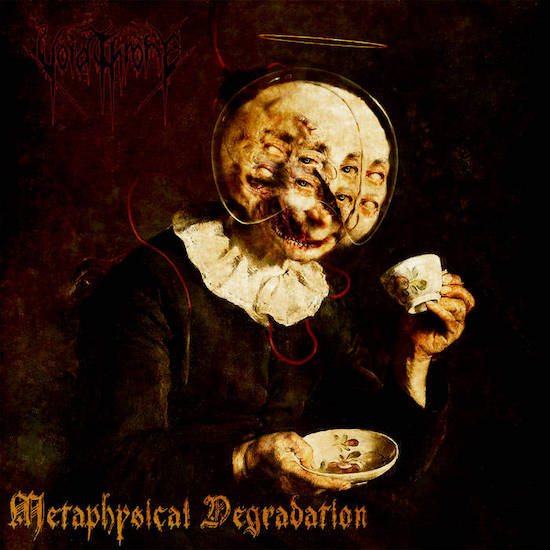 From virtually the beginning of their career Seattle-based Voidthrone have devoted themselves to creating unsettling and unnerving musical experiences. As they said at the time of their last release (2018’s Kur), “It is our intent to leave both listener and performer drained. Within this receptive exhaustion, we leave a spark — a seed of discontent that rejects normality. A hunger engendered for the other side of the veil. Beyond which — an absolute darkness….”

Those words came back to us after exposure to the discomforting sonic visions housed within Voidthrone‘s new album Metaphysical Degradation, now set for release in October. They preview what it holds in store with these words:

“The fevered revelations of change, in music form. Frenetic stories of warfare, sacrifice, consciousness, duality, infection, theism. Six songs laden with aural sickness, with secret messages to subvert the program running on your wetware. Bathe in the occult thrumming threaded through this oceanic blasphemy.”

As proven by the album’s opening track and first single, “Pyrrhic Victory“, Voidthrone have chosen a diabolically confrontational means of wiping clean the slate of their listeners’ minds and preparing them for something else, something other. As they’ve done before, but done here in spades, they’ve intertwined death and black metal to create a disorienting, disturbing, and even terrifying experience, combining head-spinning intricacy, unsettling dissonance, and raw emotional intensity.

What we have for you today is a lyric video for “Pyrrhic Victory” which makes effective use of frenzied excerpts from the Japanese anime series Hellsing and Attack on Titan. That was an inspired choice, because the head-exploding visuals are a good match for the violence and derangement of the music.

In “Pyrrhic Victory” Voidthrone don’t just use dissonance as an atmospheric flavoring, they wholly embrace it. The music’s nerve-wracking anti-melodies completely suffuse the experience. The sensations they create are variable, but relentlessly unsettling.

The guitars groan and scream, convulse and contort, and together with the maniacal maneuvers of the rhythm section and the sheer insanity of the vocals, they create moods of slaughtering blood lust, mind-fracturing pain, cold oppressiveness, and suffocating misery. And yes, the rhythm section’s variations in tempo and pattern are constant, and well-matched to the kaleidoscopic machinations of the guitars. And yes, though the vocals are far from monotonous, they’re uniformly crazed.

As you try to catch your breath from that experience, here are a few more details:

The precise release date for Metaphysical Degradation is October 27th. It will be available digitally, and on vinyl via Total Dissonance Worship. Credit for the incredibly creepy cover art, design, and editing goes to Dan Morris, Roberto Diaz, Ivana Kobilca, and Friedrich von Amerling.

Pre-orders for both formats of the record can be placed through the links below.