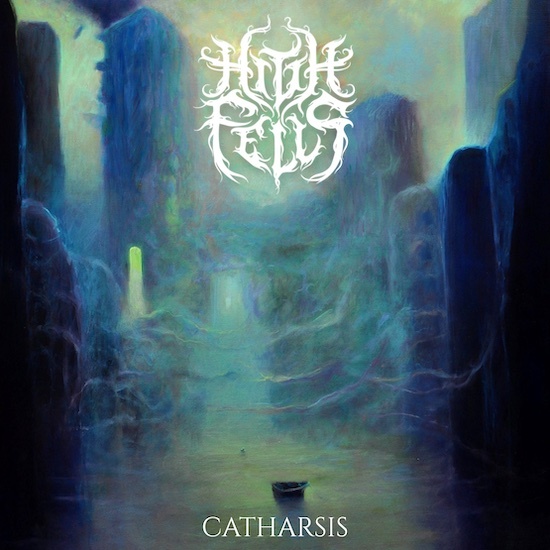 It wouldn’t be a big surprise if you found yourself a little perplexed by the High Fells video we’re about to present for a song called “Where They Call My Name“, which is off the band’s forthcoming debut album Catharsis.

On the one hand, the song itself is intense and powerful in many ways, serious music with visceral appeal, and in keeping with the album’s daunting but fascinating cover art created by Dawid Figiliek. On the other hand, the video takes some unexpected turns that radically diverge from the moods of the music… but we’ll come back to that in due course.

First, by way of background, High Fells are a relatively new blackened death metal unit from Denton, Texas. They starting getting things together during the first year of covid and then spent early 2021 writing the rest of that debut album, and they played their first show just a little under a year ago.

As they tell us, a lot of the lyrical concepts within Catharsis “focus around issues with mental illness, whether it be anxiety, depression, or past encounters in life that served as character building”. “Using this outlet,” they explain, “we’ve been able to express and cope with a lot of those lame feelings and avoid messing things up even more”. 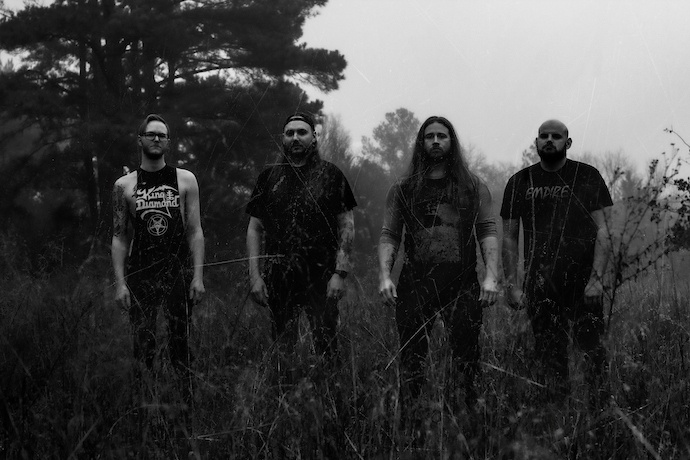 The song you’re about to hear, “Where They Call My Name“, proves that High Fells are worth taking very seriously indeed (even if the band clearly don’t take themselves too seriously), and also helps explain why the band believe their music will appeal to fans of such groups as Harakiri For the Sky, Decapitated, Hath, and Heretoir.

Propelled by battering and blasting drums and a vivid bass pulse, the song reveals whirring riffs and glittering leads that add to the pulse-pounding impact of the rhythm section, but that also create moods of terrible despair on a sweeping scale. The passion that floods through the searing screams and ravaging roars adds to the song’s wrenching severity.

When the hell-for-leather pace relents, the guitars ring out in subdued and mesmerizing fashion, lonely and sorrowful. But soon enough the music storms and blazes again, scorching in its blood-rushing and head-spinning intensity, which reaches its zenith in a marvelous guitar solo that seems introspective at first and then becomes a fever dream. Near the end, the band add another ingredient, a darting orchestral-string component that is both daunting and yet hopeful.

In a nutshell, it’s one of those songs that, although dire in many ways, gets its hooks in a listener’s head. It’s easy to be carried away by it, and very easy to go back to on repeat.

As for the video, well, maybe it’s best just to let you learn for yourselves why we said it goes off in directions that diverge from the music — playful and even goofy directions.

We asked the band about why they and the creator of the video Daniel Hambright decided to do what they did with it. And they gave this answer: “Regarding the reason for our humorous approach, we’re a group of mentally ill dudes that cope through humor. We also never want to be misconstrued for a group of egotistical types, we play together to have fun and want everyone we play for and everyone who listens to have fun as well”.

High Fells are planning to release Catharsis in late November, and you can get more details about it by following the links below. We’re also including a stream of the previously released single “A Summon“, which will also appear on the new album. It’s a hell of a good song too.

One Response to “AN NCS VIDEO PREMIERE: HIGH FELLS — “WHERE THEY CALL MY NAME””