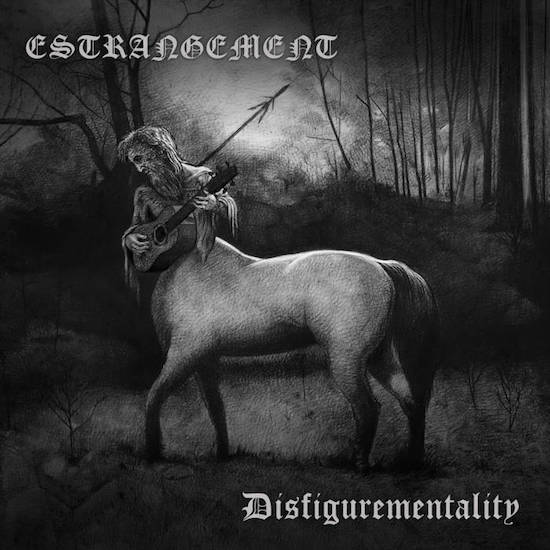 We’re about to premiere an extraordinary album in its entirety. We’re also about to open the floodgates on a waterfall of words, in an unnecessary and probably fruitless effort to explain why it’s extraordinary.

Where to begin? Maybe by saying that although you will see genre labels affixed to the music of Australia’s Estrangement on their album Disfigurementality — principally referring to it as a blending of funeral doom and classical music — there’s no kind of shorthand reference that could be accurate. To borrow from the press materials, “Funereal-Flamenca-Nuclear-Jazz-Fusion-End-of-World Music” comes closer to the mark, but still falls short.

Does it go too far to claim that Disfigurementality is unique? Well, you’ll be the judge of that, but in our estimation that’s what this music really is, something so astonishingly eclectic, so wildly creative, and so mind-blowing to hear that it really does seem unparalleled in the annals of extreme doom. 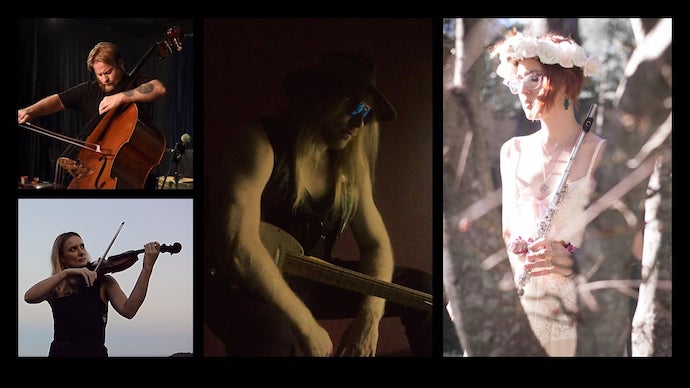 Somber strings and words voiced from deep in the throat spread sorrow immediately in the album opener “Destitution Stench” — but the sudden advent of strangled screams and frenzied bowing create a burning feeling of pain. And that’s just a hint of what’s to come.

In the much longer “Detritivore” the band introduce other ingredients and embellishments besides the violin, double-bass, and a voice from hell, i.e., bone-bruising drums, crushing chords, a wailing flute, the layering of writhing and glimmering melodies, along with the reappearance of those absolutely tormented vocals, which are terrifying in their effect. But “Detrivore” ebbs and flows in its intensity, and continually morphs. When the drums vanish, the strings moan, the flute twitters like a bird, an acoustic guitar vividly emerges, and there is singing.

That interlude is almost hallucinatory, and strangely inviting — which makes the following descent of crashing chords and detonating percussion even more stunning. The laments of the violin and flute pull the mood even deeper into grief and despair, and the tandem of abyssal growls and throat-ruining screams sends chills down the spine. But in the song’s penultimate movement, the music also convulses, creating a maelstrom of mad voices, hammering drums, scathing riffage, and feverishly flickering strings.

“Detritivore” is such an emotionally staggering experience that it makes sense Estrangement would follow it with a soft and beautifully sad instrumental in the vein of classical chamber music (“Belong Beneath”).

And that’s not the only place in the album where the band create tragic beauty. It happens over and over again, as they interweave transfixing guitar, string, and flute arpeggios in an extravagant mix of tones, both in the midst of titanic sledgehammer blows and in isolation. 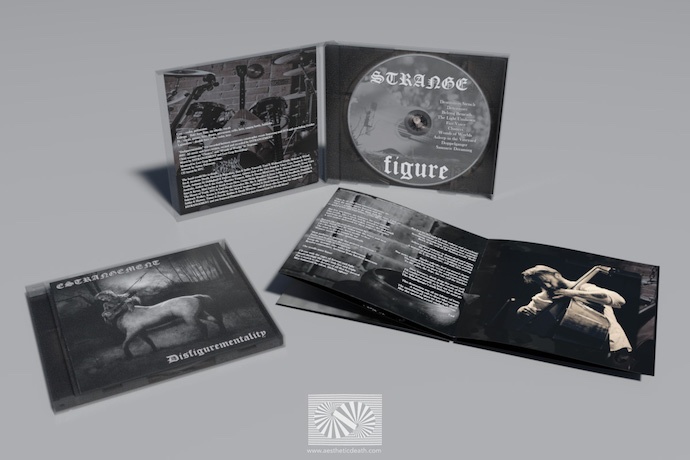 But those lead instruments also translate moods of longing, regret, heartbreak, harrowing hopelessness, nightmarish psychosis, flesh-rending torture, and turbulent calamity, as well as moods of ethereal mystery, beckoning allure, bewildering enchantment, and stunning wonder. In the midst of “Fire Voice”, a flamenco-flavored acoustic-guitar instrumental even sounds like a joyful dance, lit by bonfires.

As Estrangement weave among these changing emotions (and others) and the push and pull of their own intensity, they bring into play not only stylistic ingredients of funeral doom and classical music (both traditional and avant-garde), but also jazz, the blues, folk, progressive rock, black metal, medieval music, and hints of psychedelia. The vocals also continue to change as well, with throat singing, harmonized melodic singing, chants with an ancient and liturgical aura, operatic laments, and bestial croaking growls in the blend, along with the vocal terrors we’ve already commented on.

Every one of the album’s long songs becomes a true musical tapestry, meticulously crafted and often richly embroidered. Some of those tapestries (and especially “Clusters” or “Womb of Worlds’) might bring to mind the more hellish works of Hieronymus Bosch. In listening to others you might imagine something woven in The Middle Age or then the Renaissance, or the modernistic flailing of paint or blood against a large blank canvas.

As well as tapestries, we could also analogize these songs to odysseys, or to The Odyssey itself — renderings of epic, timeless journeys through the underworld as well as a surface world populated by magical and monstrous creatures, and portraying the potential for magic and monstrosity in us all.

Nearly an hour long, it’s a lot to take in for sure, but so full of surprising twists and turns, so continually intricate and multi-faceted, and so immaculately crafted that it’s easy to lose track of the time. Indeed, it’s mind-boggling to imagine the amount of detailed planning that went into the composition and execution of the album.

As promised, we’ve spilled a lot of words about Disfigurementality, but it really has to be experienced straight through to be believed:

The album will be released by Aesthetic Death on November 25th. It’s available for pre-order now, in CD and digital formats.