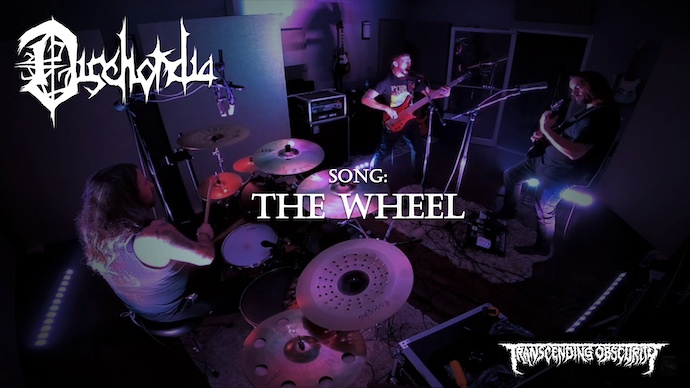 Last spring we had the fiendish pleasure of premiering a song from Triptych, the startling new album by Dischordia, which is out now on Transcending Obscurity Records. As we discovered then, and as the label accurately reported in its PR materials, this Oklahoma City crew’s latest full-length is a bone-smashing, mind-boggling hybrid of technical and brutal death metal with a healthy flavoring of dissonance and an impressive degree of adventurousness that matches the virtuosity of the performances.

As we’ve written before, the sound quality of the music is itself very interesting. The guitars have a mangling, mauling, and detonating quality that’s dense, heavy, and brutally distorted, and yet the obliterating drums and the mercurial bass come through vividly, as do the bizarre and often unearthly lead-guitar machinations and the wild howling and roaring vocals.

Moreover, the music is packed with stops and starts, twists and turns, and sudden variations in tempo, and this sonic balance makes it possible to pick out and appreciate even more what’s happening — while still feeling like you’re being scathed and steamrolled into submission.

Many of you have already discovered the disconcerting wonders of Triptych, but you’ll still enjoy and appreciate the full-band playthrough video we’re about to premiere, and for those of you who haven’t been exposed to the album, this should provide a jaw-dropping introduction. 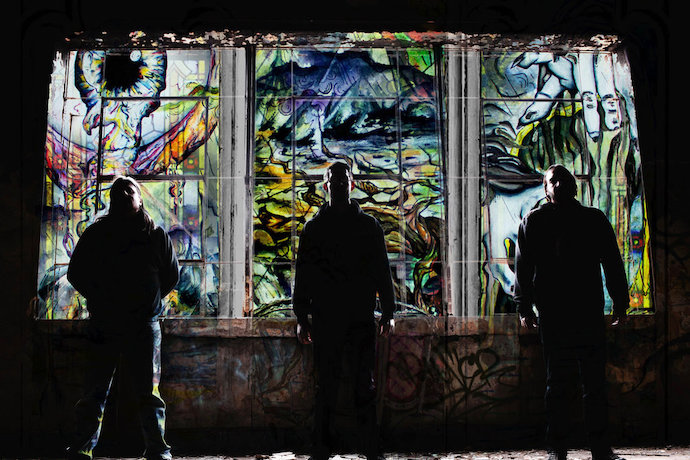 Dischordia don’t do the same thing on every one of the Triptych tracks. In the middle of the album are three songs back-to-back — “The Wheel“, “The Whip“, and “The Carriage“, which together form “The Chariot Suite“, and it’s the first of those which is the subject of the playthrough video we’re presenting, shot by Adrienne Turner, Cyrus Idell, and Dischordia.

Following an eerie, almost gothic instrumental overture, the song bursts open in a storm of wild fretwork flurries, eye-popping drum escapades that turn on a dime, and a tandem of monstrous guttural growls. There’s delirium and devastation in these deleterious furies, with no mercy shown for sensitive sensibilities. As ever, however, the music is remarkably intricate, and though it sometimes seems that each member is off on his own frolic, the rapidly moving pieces and shifting gears always fall into place.

Even in a live performance like the one you’re about to see, these madmen execute with scalpel-sharp precision. Indeed, not just listening but also watching this being done in the flesh, materially adds to the WTF?! factor. It’s a riot for the mind as well as the eyes and ears.

Triptych features artwork by Gianna Martucci-Fink, and it was mixed and mastered by Colin Marston (Gorguts, Replicant), who knows a thing or two about this kind of music.

The album is still available on Transcending Obscurity‘s usual vast array of formats, with apparel. They have recommended it for fans of Gorguts, Wormed, Ulcerate, Ingurgitating Oblivion, Logistic Slaughter, Sunless, Replicant, and Chaos Motion.

For your further listening pleasure, we’ve included the full album stream below.