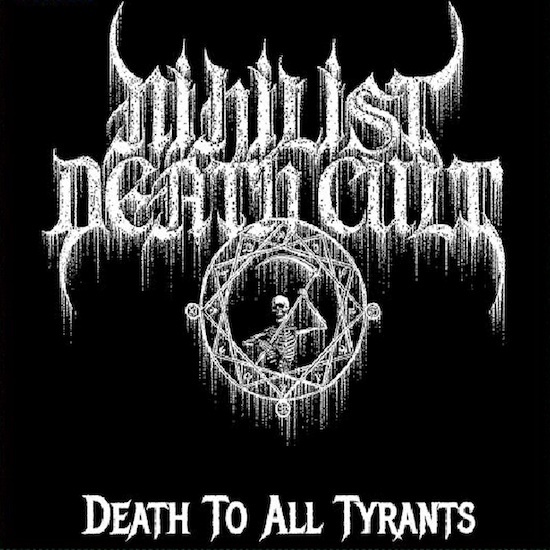 Near the beginning of this month Toronto’s Nihilist Death Cult unleashed their debut album Death To All Tyrants — and in this case the overworked term “unleashed” is damned accurate. There’s as much brazen and brawling fury in the record as you might expect from its title.

To express that anger, Nihilist Death Cult stew together ingredients of hardcore punk, death metal, and grindcore in an iron cauldron over a hungry blaze. The bass hits like a sledgehammer, the d-beat gallops and double-bass fusillades feel like hammers to the skull, the riffs have a cruel, mauling tone and they slash like serrated blades and boil in voracious feeding frenzies, and the vicious growls and rabid howls are utterly barbaric.

It’s a full-throttle, full-force rampage that wastes no time, discharging 9 tracks in less than 15 minutes total, and for an extra dose of exhilaration the music includes some wild guitar soloing that sears like acetylene torches applied to flesh.

Here at this site we stupidly missed this release, and maybe some others missed it too, which is why we’re fucking stoked to premiere a lyric video today for one of those 9 onslaughts — a track called “Obey & Consume“. 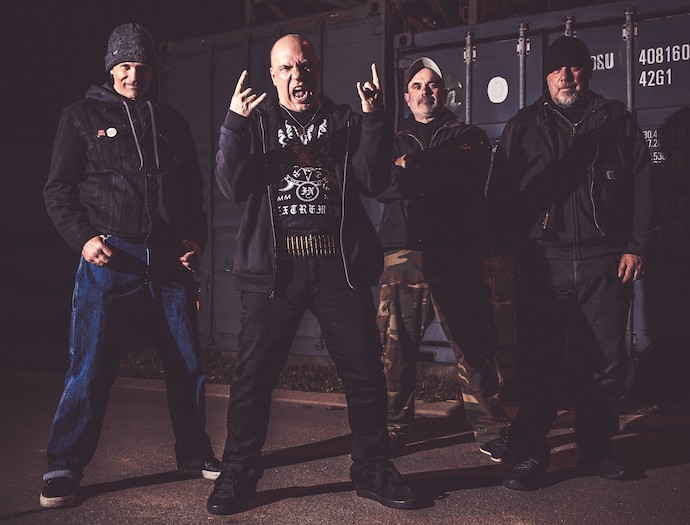 It’s no wonder that Death To All Tyrants is such a powerhouse experience, because although the band is new, the members are veterans. Nihilist Death Cult was formed in 2018 by Nick Sagias on bass and vocals (Tribe of Pazuzu, Soulstorm, Overthrow, ex-Pestilence) and his brother John Sagias on drums (Soulstorm, Abyss), along with guitarists Ethan Bolduc (Jaww, Abyss), and Rick Kowalski (Soulstorm, Bound By Defiance).

It’s also no wonder why the music is so angry (and rightly so). As Nick Sagias explains, “Death To All Tyrants is about how the corporate-sponsored news media feeds you the stories and ideas they are paid to push… it’s about the victims standing up to the tyrants… it’s about choosing your own path and not blindly following norms if they don’t suit you”.

In line with those themes, the song in the video we’re presenting today, “Obey & Consume“, is about (in the band’s words) “just following blindly and not questioning anything, being a good consumer… the time to fight is always now, not later”, and you’ll see in the video the inspiration of John Carpenter‘s They Live, along with clips from some other classic films.

In this riot of a song, you’ll hear a duel between lead guitarist Ethan Bolduc and guest guitarist Randy Harris from Tribe of Pazuzu, who trade off with some truly freaked-out soloing.

Death To All Tyrants was recorded at Arcade Studios, and produced and mixed by Scott Middleton. In the song “You Get What You Deserve”, Ian Mumble (Overthrow) also appears as a guest soloist. The record is recommended for fans of Poison Idea, early DRI, early Bad Brains, Nails, and CroMags.

DEATH TO ALL TYRANTS:
https://nihilistdeathcult.bandcamp.com/album/death-to-all-tyrants