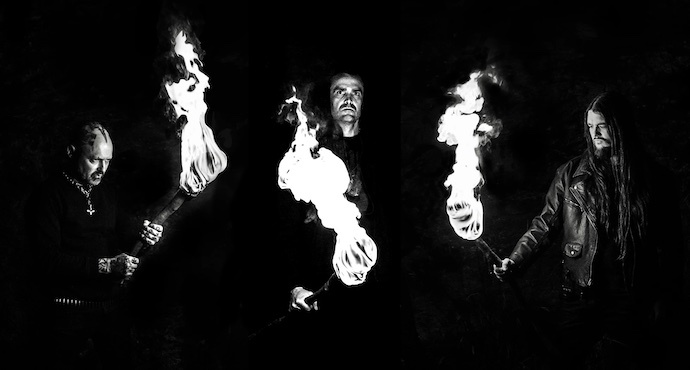 On THAT HOLIDAY last Sunday I was going to wish everyone good tidings of joy, because joy is so often impoverished in this age, but the burden of laziness weighed me down as I thought it might. I was looking forward to darkening that holiday with un-joyful music via this column. It’s not as satisfying to darken National Fruitcake Day (yes, today is National Fruitcake Day here in the U.S.), but I’ll take what I can get.

As I was making my way through music I thought might make good fodder for this column I unexpectedly severed a certain musical vein, one that spurted its black blood through the first four selections below. You’ll need cotton wads to sop the blood from your lacerated ears, though no sponge will absorb the terrors and torments of these deleterious but captivating anthems to all that is wrong. They seem to exclaim damnation to trends, quite comfortable in their desolate burning castles first built in by-gone ages of black metal, and let’s hoist a chalice of blood to their devotion, shall we?

And do gird your loins, because there is A LOT of music here, straight up through the EP that ends the collection with what might be the maddest songs of all. 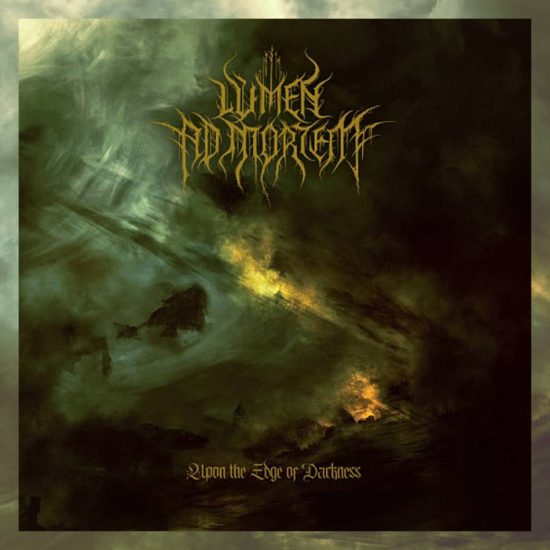 Let’s begin with “Within The Smoke“, a song whose lyrical theme concerns “the three Norns of wyrd , hunched over the loom of destiny. feverishly weaving the threads of predestined fate upon all beings with crooked hands of benevolence or malevolence!” So says Lumen Ad Mortem, but there’s very little sign of benevolence in the music.

Instead, what you’ll find is a spine-shivering assembly of scalding vocals, variable drumwork, writhing guitars, and vast seas of ice-cold symphonic sound, which together channel primordial menace, frightening torment, and harrowing despair.

“Within the Smoke” is the second track from Lumen Ad Mortem‘s forthcoming debut album Upon The Edge Of Darkness, which will be released on January 27th by Bitter Loss Records. I’m also including a stream of the first single, “Thought And Memory“. 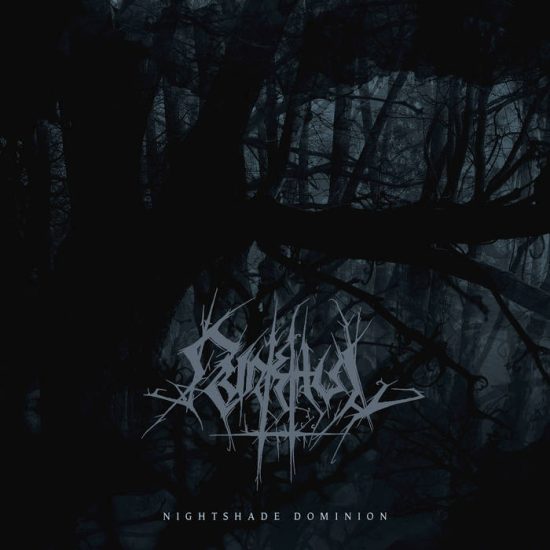 Nunkthul released a demo in 1999. They recorded some more songs between 2001 and 2004, and reportedly then left the tracks in an attic. I don’t know why. It can’t be that Nunkthul were embarrassed by what they’d done, at least I don’t think so based on listening to the songs — because yes, everyone can listen to them now. The songs were brought out from the rat droppings and cobwebs and have been released by Malpermesita Records as an album named Nightshade Dominion.

The songs move like immense, heaving seas and searing storm-fronts made of razors, driven by light-speed drum blasting and back-breaking booms, and whipped to further heights of dreadful ferocity by ugly snarls, wild banshee screams, crazed yells, and blood-choked roars (with cold spoken-word pronouncements in the mix).

The music, which sounds like a union of guitars and synths, is so dismal and malign, so wretched and cruel, and simultaneously so wholly given over to delirium that it becomes very unsettling, though it’s also relentlessly electrifying. It also strikes with such expansive, senses-saturating power that it might make you want to duck and cover.

If you hope to catch your breath at some point, you won’t have a chance until just a few moments in the closing track, just before it brings the album to a close with visions of awe-inspiring sonic splendor. Maybe some kind of relent or diversion would have been a good idea, because the songs tend to merge together. Whether that’s a minor or a major quibble will depend on your tastes.

Metal-Archives reports that the main person behind Nunkthul is also a member of Despond and Nydvind, and formerly a member of Monolithe and Antaeus (live). 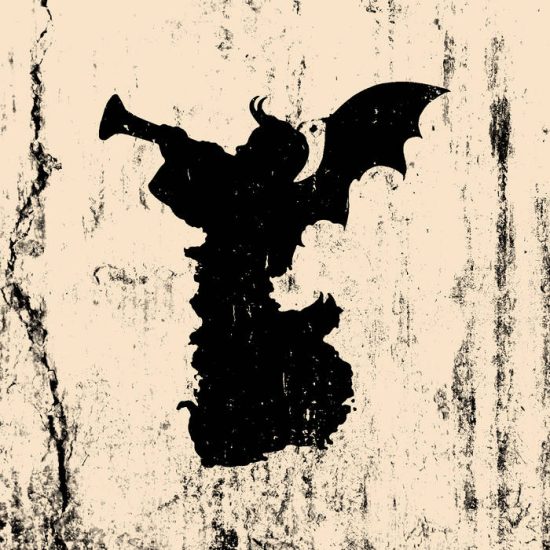 Eighteen months ago I had the pleasure of premiering and reviewing Theurgia Mortem, the debut album of the occult French black metal band Vurvarat that was subsequently released by Atavism Records. I went on and on with the words, as I often do, including these:

There are no happy times in Theurgia Mortem. Even the most beautifully ringing guitar arpeggios are steeped in sorrow and despair. Oppressive funeral marches hammer away any feeling of hope. Even when the drums rumble, roll, or thunder, and the riffing sears in feverish spasms, the music leaves hope gasping in a ditch, surrendering to the assaults. And there’s an unmistakable aura of the occult that drapes almost everything in cold shadows and unearthly phosphorescence. Yet for all of its sounds of dread and doom, the album is intensely charismatic.

Theurgia Mortem was a long-gestating record, but Vurvarat has been faster following it up, with the release a couple weeks ago of a substantial EP named The Inner Spear of Truth. The project’s sole creator describes it as “a personal synthesis of what I like about Black Metal and what I have always wanted to write and to record. This is my tribute to bands such as Funeral Mist, Marduk, Deathspell Omega, Ondskapt, Katharsis, Ofermod, Mortuus and so on”.

Once again, Vurvarat will test your mettle and push you out of any emotional comfort zones. The opening track “Vagari” is a steady and tremendously bleak march that opens eyes based on the variations in the vocals alone, which range from rabid screams to stately ecclesiastical chants and singing. The eerie synths, feverishly skittering tones, and sedate piano chords that accompany the strummed guitar make the experience seem unearthly as well as utterly desolate.

“Vagari” sets the stage, but although the remaining tracks aren’t much happier, they do vary. True to its name, “Dolor” brings in mournful strings as accompaniment for wretched riffing, tortured voices, and eruptions of frantic double-kicks — but the song surprises with a burst of wild, cavorting instrumentation and extra-rabid vocals, giving the song an almost hallucinatory or hellishly psychedelic feeling.

“Dolor” turns out to be a better marker for the EP as a whole than the opening song, because the remaining three tracks are just as multi-faceted and surprising. In the vocals you’ll encounter high-flying female choirs as well as demonic cacophonies, and you’ll also encounter grand infernal guitar fanfares, bubbling and jolting bass-lines, reptilian guitar arpeggios, dramatically shifting tempos, grim and august orchestration, classical piano refrains, and of course melodies that seem both lethally predatory and steeped in torment and misery.

And almost all of it sounds supernatural. It wouldn’t go too far to brand the EP as avant-garde black metal made in the blackest pits of Hell. 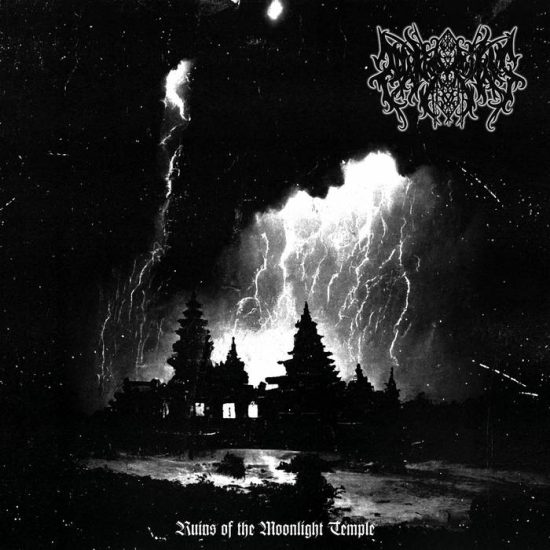 In a short space of time this Indonesian black metal band has plowed a lot of ground, beginning with a 2021 debut album, following that with a trio of splits, and then last month releasing a second album, Ruins of the Moonlight Temple.

The new record is a weighty tome, with 11 tracks and nearly an hour of music, and I wish I had more time to do it justice. It opens in striking fashion, with a “Prologue” track that brings into play strong musical hints of Nansarunai‘s homeland, along with scary-as-shit vocal fanatacism. The exotic strains of that opening track don’t vanish, but continue playing a role, though the raw and abrasive riffs and throat-ripping, ear-ruining screams will play havoc with tender ears, and synths are deployed to heighten the atmosphere of occult terror that flows through the album.

Nansarunai does switch things up within the songs, varying the pacing from funereal slogs to dervish-like dances and berserk attacks, and throwing in a plethora of head-hooking riffs and differing instrumental embellishments to make things even more interesting. Wisely, there is even one dungeon-synth-like breather in the mix. Or to put it another way, the album is a runaway kaleidoscopic riot that really must be heard to be believed.

I’ll add a second opinion from Brad Sanders at Bandcamp Daily, who put this on his list of 2022’s 12 best metal albums: “The album doubles down on Nansarunai’s now-signature blend of martial vigor and melancholic pensiveness. Musically, it sees the project’s lone member more confidently experimenting with melody and arrangements, adding complexity without sacrificing any emotional heft. It’s powerful stuff.”

Sometimes we marvel at madness, at the rantings and ravings of people who live in their own reality, very different from our own, and which in truth we have no basis to judge just because we can’t see it. One mind can’t inhabit another, no matter what.

Such thoughts were spawned by the madness of Kexelür‘s debut demo of experimental black metal, Llave a las profundidades​.​.​. (“Key to the Deep…”). It consists of three very long tracks which represent the band’s exploration of “the fatality of the human race” and “the inevitable end of civilizations”.

The music presents an interesting juxtaposition of tonal qualities. The drums have an “organic” sound, which make them seem like they were recorded in a rehearsal room with one mic (and there’s almost no blasting here). The growling, bubbling, and bounding bass has a fairly natural tone as well. By contrast, what clarity comes through when the layered guitars ring, writhe, and roil seems warped, and the rest of the time the fuzz on them sounds like propagating mold. By further contrast, the occasional synths seem celestial.

Sometimes the guitars made a beastly baritone noise, sometimes they wail like an acid trip gone wrong, or squirm like worms. Sometimes they get jazzy and proggy.

The riffs do somehow manage to catch in the head from time to time, but mostly they’re damned twisted, with a premium on dissonance, discordance, and derangement. The vocals are twisted too. Their guttural denunciations, rancid roars, and cracked proclamations are ugly as sin.

There’s really no way to predict where these songs will go. Unless I told you, for example, you’d be blind-sided by how bright and beguiling the closing track is after the madhouse excursion of the first too. The EP as a whole is like being propelled through a fiendishly ingenious and stunningly elaborate nightmare labyrinth, with a gift at the end for surviving. And that’s why the extravagant length of the songs doesn’t really matter – because the twists and turns are so relentlessly eye-popping and mind-boggling.

Llave a las profundidades​.​.​. was released in late October by Sun & Moon Records.