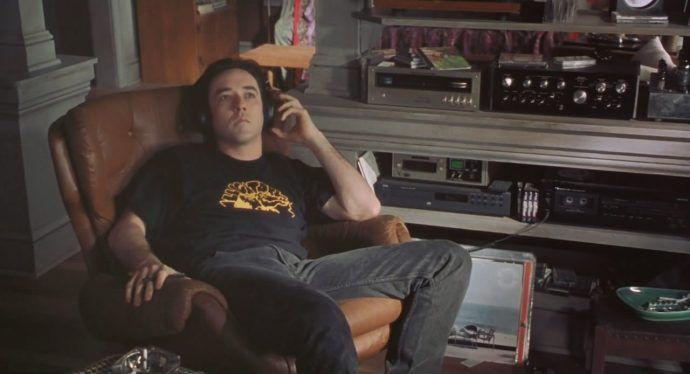 (NCS contributor Axel Stormbreaker takes part in our year-end LISTMANIA series with his picks for the year’s “top 10 dark horse releases,” embellished with quotes from a certain 2000 movie and the book it was based on.)

A good compilation tape, like making a “dark horse” year-end list, is hard to do. You’ve got to kick off with a corker, to hold the attention. I started with “Ljúshtaeshrhendlhë Jecan Glézma”, but then realised that you might not get any further than track one, side one, if I delivered what you wanted straight away. It’s a long song too. So I placed it in the middle of side one.

And then you’ve got to up it a notch. And you can’t have raw music and bright music together, unless the raw music sounds like bright music, or the other way around. And you can’t have two tracks that are too aligned, unless you’ve done the whole thing in parts. And the order from start to finish should be correct, regardless if you split it in segments. And… oh, there are loads of rules.

So, here we go. No bands that are well appraised are included. People will listen to their records anyway.

“What happens if you refuse on the grounds of it being just too fucking grim?”

Argentinian Cave Metal? Since guitar solos appear to be absent for the most part, you probably got it right. Buenos Aires’ Cavernum plays grim death metal, as straightforwardly as it gets, to a point the record may appeal even to circumstantial fans of the genre. It’s got the groove that old Swedish DM mastered, the rage found in the old Dutch scene, some morbid riffage in the Demoncy sense, as well as the blackened doomy hammering we dig in early Blasphemy.

Not that influences are too easy to distinguish, you know. Born In A Cave is all about laying down simplistic, catchy riffs, investing in groove and grilling steaks in your back yard while watching your favorite sports match. It may be short in its running length, but it’s so undeniably fun you won’t hesitate to play it repeatedly while cooking with your neanderthal buddies.

“People worry that some sort of culture of violence will take kids over. Nobody worries about them listening to thousands of songs about broken hearts and rejection.”

What I expected should be no secret, regarding the barbaric ugliness depicted on Redreigner’s Eater cover art. I am, of course, referring to big hairy goat balls, violated nuns, poor monks crucified (most likely, upside down) and other themes suited for similar party anthems. After all, Greeks have quite a thing for old-school black/death metal, so an educated guess would point out that Redreigner, most likely, sound like an under-produced bestial black metal band.

In reality, the band has no connection to archaic sounds, as they chose to draw strength not from the catacombs, but from the heart of urban centers instead. Eater‘s “crunchy” aesthetics feel quite reminiscent of Hatesphere’s The Sickness Within, while its playful guitar work pays much tribute to mid-era Carcass. Starting from Necroticism – Descanting the Insalubrious, up to Swansong (or even, up to Blackstar’s Barbed Wire Soul), they went for reinforcing their death metal with melodic leads and death & roll quirks, without affecting its overall consistency. A rather welcome surprise, especially now that the said “grill” type of bands is rare to come by.

“A good compilation tape is hard to do. You’ve got to kick off with a corker, to hold the attention.”

If Metal Archives is correct, Trhä is a band that originates from Mexico City, now resides in Texas and sounds more Japanese than even some of their locals do. Which is what I call refreshingly interesting, both as a writer and an explorer of the black metal realm. In fact, the very amalgam of its tenacious riffing is enriched with far-eastern raw black metal, synth effects, death metal intermissions, warp-speed USBM charges, funeral doom pacing and even some post-metal climaxing.

Don’t fool yourselves though. This is closer to a compilation release, than a linear studio album. Since you are about to find out every step the artist has taken along the way, you should expect how some tracks sound as if recorded during different time periods. Either that, or “Ljúshtaeshrhendlhë Jecan Glézma” is such a killer opener, you’ll find trouble getting any further than track one, side one.

“I lost the plot for a while then. And I lost the subplot, the script, the intermission, the credits, and the exit sign.”

Costa Rica’s Dusk may be supposed to have crafted a “modern sounding” record, but I can’t help getting these images of a retro sci-fi menace, greasily creeping around the corner. All I need is to press play and its post-apocalyptic scenery would throw me straight into Alien, Predator 2, and Hardware (top favorite classic, heh).

Not that I deny certain aspects of its production are flawed, you know. But then again, how often do you see bands messing with French industrial black metal in the vein of Blacklodge’s T/ME, Cold Meat Industry classics, as well as… old-school EBM at the same time?

Windveill’s ambient black metal neither strays far from the atmospheric melancholy of Lustre nor does it pale in direct comparison. In fact, this one-man band from Brazil showcases a remarkable expression of talent, especially since the gravity of his ethereal ambience may well drag down even the most established artists of the genre.

I know, big words, big promises, yet perception is always the key aspect of every release. His crystallized keys may dominate over the remaining instruments in rather anticipated ways, but it’s the subsequent echoing effect that feels alluring to a suspicious degree. Just like an otherworldly siren would be tempting a weary sailor to leave his post – even if such a comparison bears no positive outcome.

People who will dismiss the above due to production flaws of a Brazilian band are neither my friends, nor should be yours.

“I guess I should have forgotten about it ages ago, but forgetting isn’t something I’m very good at.”

As you might have guessed by the name (derived by Amebix), Antimelodix is a Russian crust band, infused with a metal influence a bit quite strong. Even if their crispy, melodic sound of “Dark Days part 2” showcases only the best qualities found in bands like Tragedy and From Ashes Rise, the overall rhythm and lead guitar work on “Trapped In Fire” reveals a solid metal background. It’s rather needless to say how their guitar solos rip guts wide open, since these guys don’t seem to care about terms, labels, or how punk is maybe supposed to sound.

The more the release progresses, the more it strays from the classic crust sound. Which makes it too good, since Antimelodix preferred to pile up every catchy idea they had in four killer tracks. I mean, “Cyberwar” sounds almost as a black metal song, while “The New World” leans towards… viking, or epic metal? And all of this is happening without actually spoiling the said EP’s consistency. Such are the moments I actually wonder why I’ve heard so many bands worthless in comparison, and even more, why I won’t forget about them.

“Barry, you’re over thirty years old. You owe it to your mum and dad not to sing in a group called Sonic Death Monkey.”

I am honestly not making fun of the band. But I couldn’t think of a High Fidelity quote that’s more fitting, even if I do comprehend the reasons behind the selection of their cover art. After all, bands like Orchid or early Envy incorporated the said screamo mentality decades ago, by mixing pop music with punk and hardcore into an amalgam too alienating for any punks of the traditional sense.

Likewise, Asunojokei’s Island seems more than capable to test any pre-established borders. Post-hardcore, shoegaze, post rock, screamo and post-black metal are all filtered carefully through an impeccable production. If I had to discuss this by using relatively recent examples, I would say it’s a better post-black hybrid in the vein of Deafheaven and Alcest, with alternative/post-hardcore elements in the vein of Airs and the type of post-metal Sannhet play. But no, then you’d have to add more shoegaze, pop, indie rock and a bit of that screamo to the mix. How the fuck do I now describe it?

Mnemosyne deserves its own place on a “dark horse list” for succeeding exactly where DHG’s Supervillain Outcast ultimately failed. What we are discussing deals with accessible structures, classic “big rock” sound, dissonant riffage, as well as the much-needed experimentation ’90s avant-garde principles dictate. You’ll find zero excuses here, complete absence of negligence, nothing but unspoiled finesse. Simply, because Aenaon chose to craft a record that’s meant to appeal not just to fans of extreme ‘90s metal, but to any listener who keeps an open mind.

Even if the band maintains its own identity, the said influences reveal themselves through tracks in the vein of “Trauma Cultura”. Such precious highlights allow the entire construct to breathe, blossom and unfold enriched layers of diverse proclamations. Please do note here every instrument (including the saxophone) appears to be carefully calibrated, as if a cosmic algorithm is guiding every member’s actions on a subconscious level. Either that, or they are just too dedicated, cos we’ve been overcrowded by records that sound a bit too much the same.

“I’m very good at the past. It’s the present I can’t understand.”

It’s fucking beautiful. I may dislike wine with a passion, but I admit my guilt upon considering to buy a bottle while listening to Wound of Gods by Germany’s Maladie. Don’t get me started now of how its cover art could well fit a ‘90s Lake of Tears album on Black Mark records. Don’t you dare get snobbish on me of how gothic metal is outdated. And don’t you even think about putting shame on adding prog metal elements, as black metal vocals have suited such experiments for three full decades.

As you might have guessed,  Maladie have incorporated sounds from three different territories, as well as decades, along with classical instruments that well enrich the final result. An album so deep and concise its only true references could be found in classic ‘90s records. I mean, if the vocals didn’t seem “out of place”, we’d be talking about a strong contender for the album of the year here. But, quite sadly, it’s neither the first time the present does not comprehend the past, nor does it blend unequivocally in all needed circumstances.

Hands down, Mute Ocean’s Caravan might not be the best, but it’s undeniably the most outrageous album of 2022. Should we summarize its basic qualities in direct catch-phrases, we’d call it “humanitarian sci-fi metal from Russia, balanced between black metal, improvisational jazz and post-metal directives”. Which may seem like a mess upon first impression, yet its actual music flows like a charm.

The fact production viewpoints remind of bands in the vein of The Ocean Collective, does not necessarily mean the riffs are watered down. Nor that its Yakuza-styled saxophone improvisations alienate any primal foundations of the genre. On the contrary, what we have here is a brilliantly inspired record, one of those which was written in the old-school sense, destined for all you avant-goats out there who still seek sense in experimentation.