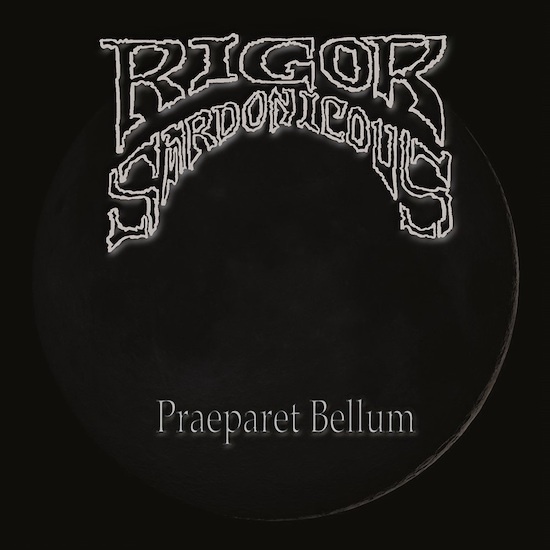 One of the ways we’ve tried to help introduce our visitors to new music that might strike a chord with them is through premieres of new songs and complete releases. During 2022 we did that almost every week-day for 52 weeks, and now we’ve arrived at our final premiere of 2022. And what we’re presenting now could hardly be a more fitting way to draw a heavy shroud over a moribund year.

What you’re about to hear is the opening song from Praeparet Bellum, the forthcoming seventh album by NY-based Rigor Sardonicous in a career that has spanned more than 30 years. It also happens to be this steadfast duo’s first full-length in a decade, and so calling it “long awaited” is an understatement.

As in the case of that long-ago last album, 2012’s Ego Diligio Vos, the Memento Mori label will usher the new one into the world, with the crypt doors set to open on January 23rd. 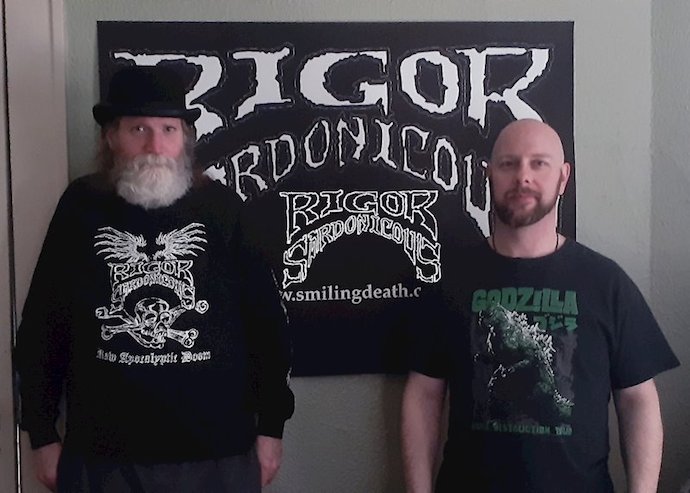 It’s no overstatement to recognize that the long-standing partnership of bassist Glenn Hampton and vocalist/guitarist Joseph Fogarazzo has resulted in some of the darkest and creepiest music emanating from the realms of death metal. Four years ago, when our brother Comrade Aleks interviewed Joseph, he explained that the band’s vision had never changed over so many years:

“We were firm about what that was from the start because it was simply an expression of what we were feeling. We strove to catch very deep and primal emotions where sensation can only be noticed and not verbally expressed, “with lyrical themes inspired by “Death in all of its mannerisms”, fueled by a rage and hatefulness that has not diminished.

As for the ultimate message of Rigor Sardonicous, Joseph expressed it this way: “Fear, death, hopelessness, and dread in a realm beyond mere human words. You have nothing and ultimately you are nothing, so get over your damned, lame selves.”

As mentioned, that was four years ago, but based on the song we’re presenting today, “Caelum Ardere Vidistis“, those sentiments still ring true.

The song proceeds like a massive lumbering monster that has emerged from a lake of primordial ooze to shake the ground, poison the air, and choke the senses. The slo-moving drums pound like megaton sledgehammers, the stringed instruments are tuned to subterranean depths and caked with grit, and the macabre vocals are themselves hideously deep, choked with blood and bone, and spiked with frightening gasps.

Utterly primitive and heartless, the music hulks and heaves, menaces and moans, and seems fanatically devoted to crushing the life from all that stands before it, with no frills or filigrees, presenting only a brutal and relentless march toward extinction.

So yes, it seems a perfect way to complete the devastation of another expiring year, to smother, choke it out, and beat it into a final submission. With the timing of its release, the album can then begin the process of ruining the New Year in its cradle.

For more info about the release, keep an eye on the locations linked below.