Not even one full week into the new year, and we’re already seeing lots of excited reactions among metal fans and our own staff about how strong the year is beginning, and today we’ve got one more reason for you to be excited, thanks to the German band Devil’s Hour.

On their new six-song EP Black n´Punk Marauders, the band whip up enough high-voltage energy to power big turbines. As the album’s name suggests, their music is a cauldron of sound that’s mainly influenced by Punk, Rock, and First Wave Black Metal bands from the ’80s and ’90s, but Devil’s Hour also masterfully pull from wellsprings of old-school speed metal and classic heavy metal.

The spiked gauntlet and vicious knuckledusters on the record’s cover reinforce the message that this is intended to be a savage rampage, but as feral and ferocious as the music is, it quickly becomes clear that these marauders know how to write songs, and highly infectious ones at that. 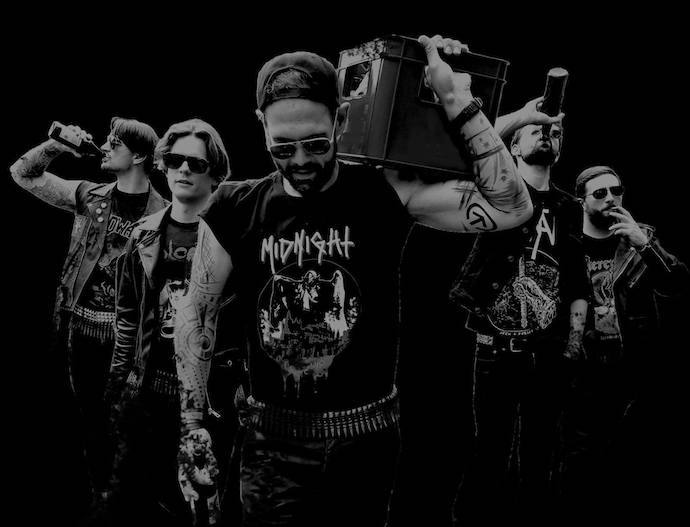 Devil’s Hour opened their salvo with the release of the album’s closing track “Terror, Death and Devil“. Running just shy of four minutes, it fills the time in electrifying fashion, with pulse-punching punk-fueled drumwork, vividly thrumming bass-lines, an array of riffs that blaze and jitter, and rabid gang howls.

The guitars have a piercing tone, all the better to light a fire in listeners’ heads, and the fire-breathing delirium of the soloing dials the temperature even higher. At times it sounds like the band are detonating bombs, and they throw in fretwork convulsions and even more unhinged vocal barbarity that together create sensations of violent madness.

On top of everything else, the riffs are big hooks, making this amalgam of punk, speed metal, and black metal a quickly addictive romp, and an epic way to end a savagely exhilarating album.

Today, via our premiere, Devil’s Hour resume the attack with the album’s title song “Black n´Punk Marauders“, which also happens to be the track that opens the album. It takes about two seconds for the song to set the hook, thanks to a skittering speed-metal riff, a skull-snapping drum fusillade, and an ecstatically squirming lead-guitar.

Perhaps needless to say, it’s a feral and ferocious escapade, with vocals that come for your throat again, but there’s also something about the song’s wailing chords that radiates fear and desperation, a feeling of darkness balanced against the music’s adrenaline-fueling energy.

Moreover, after the sound of another bomb dropping the band switch things up with bursts of martial percussive fire, brazen guitar fanfares, and riffing that seems to plead for mercy in the midst of scalding vocal hostility. But there is no mercy, because the ensuing mania of the drumwork and the guitar solo revels in the ecstasy of mayhem.

And once again Devil’s Hour shows that they have killer songwriting chops to go along with killer performance chops. These riffs rule.

Black n´Punk Marauders is set for release by Crawling Chaos Records on February 10th, and they’re making it available on CD, with patches, shirts, and merch bundles. Check out the options and place pre-orders here: