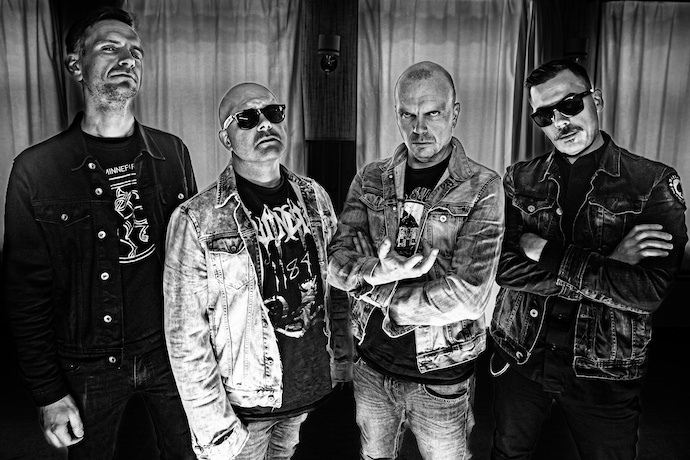 I didn’t put together the usual Saturday roundup of new songs and videos yesterday. Partly this was because I got a late start on the day, but also because I wanted to spend more time figuring out what to include in the rollout of our 2022 Most Infectious Song list. I made good progress there, with enough choices to fill segments every day during the coming week. I think they’ll provide more reminders of what a great year for metal 2022 was.

But now on to the task at hand. The collection I assembled for today explains why I chose the name “Shades of Black” for this column too many years ago for me to remember, because most of these songs hover just on the outskirts of the black metal soundscape. They wouldn’t sound the way they do without that influence, but they’re built around other significant interests too. However, I’ve balanced those with a pair of songs near the middle that dive deep back into black metal traditions of yesteryear.

This collection is also more like the kind of “Seen and Heard” roundups that I failed to do yesterday, in that all the songs are advance tracks from forthcoming albums rather than complete new releases (even though one of those advance tracks is 20 minutes long). And I think you’ll find all the songs quite infectious — until you get to the closing pair. 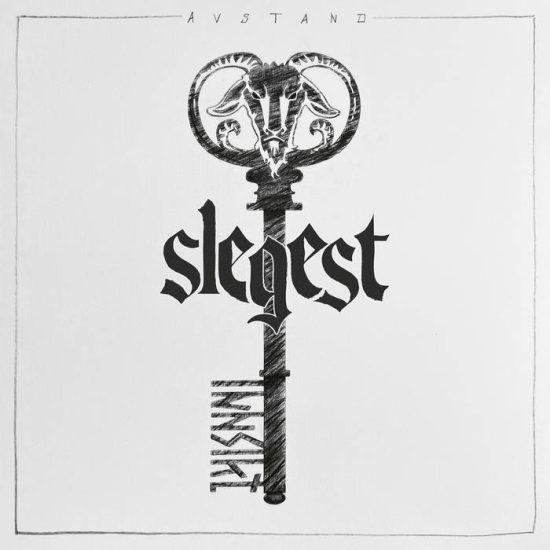 One of my favorite bands on the planet isn’t among the most extreme groups you’ll hear around our ruined halls. But Slegest are devilish riff-mongers of a high order, and the new single from their forthcoming fourth album Avstand (“Distance”) is strong proof of that.

Slegest explain that Avstand was inspired by Nietzsche’s The Birth of Tragedy. With respect to the new single, they say:  “‘Forløysning og Rus’ means ‘redemption and intoxication’, two important components in SLEGEST. The song bursts with energy and nasty riffs, and can easily be played at maximum volume.”

That’s no bullshit. The song rocks damned hard and has more hooks than a big slaughterhouse. But true to form, Slegest give the music a sinister edge, and not just because of frontman Stig Ese Eliassen‘s vicious goblin snarl and the brittle and bristling sounds of his native tongue. (If you don’t know, Ese played guitar on four albums by Vreid before leaving that band in 2010.) The song was presented through a video filmed by Håvard Nesbø and shot at an abandoned farm and an old house of worship in Slegest‘s hometown Leikanger.

The first single from the album, “Innsikt“, came out about a month ago, while I was still immersed in posting year-end lists at our site. But I’d like to urge that you listen to it too. Plenty of hooks there as well, and If anything it’s even more menacing than the newest single, but it’s also tinged with moods of melancholy and grief that become dominant by the end.

Avstand is set for release on January 20th by Dark Essence Records. 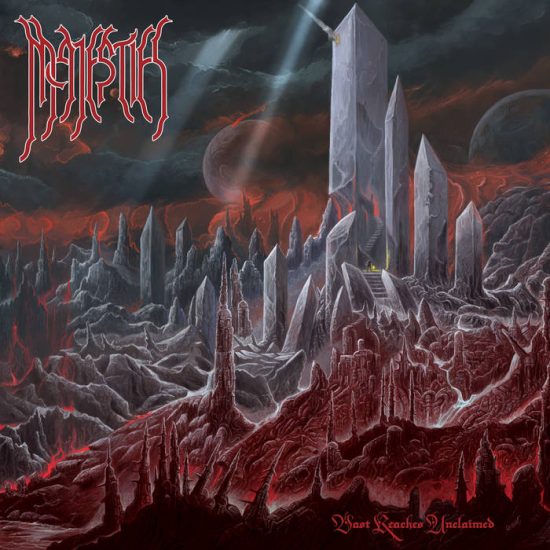 And holy shit, speaking of riff-mongers….

Tanner Anderson, Carl Skildum, and Matthew Kirkwold have already accomplished great things through Obsequiae and Inexorum, and so when the news broke that they had written and recorded an album together in a new melodic death metal project named Majesties, it was inconceivable that the results would be ho-hum. But the first single from the album still exploded my head, despite my already confident expectations.

“The World Unseen” is a pulse-puncher par excellence, with flesh-searing vocals and dual-guitar harmonies that fly high, creating a fist-pumping experience that’s glorious, leavened with moments of sinister savagery. And man, the guitar tone on the brief solo at the 2:25 mark pierces like something thrown from Mount Olympus. If I haven’t been clear enough, the whole thing is spectacular.

The name of Majesties‘ debut album is Vast Reaches Unclaimed, and it will be released by 20 Buck Spin on March 3rd.

I guess you might be tempted to call Høstsol a black metal “super group”, given that its members are Cernunnus (Manes), Kalmos (ex-Barathrum), Rainer Tuominkanto (Ajattara), and Niklas Kvarforth (Shining). What they chose to do together on their debut album Länge Leve Döden (“Long Live Death”) was to make a deep dive into yesteryear. In their words:

“Länge Leve Döden is our monumental celebration of the great Lord of Death. A perfect alignment of five songs that were written under a awful unhealthy process over the course of two years. Expect Black Metal the way it used to feel and sound back in the early nineties and rejoice!”

The album’s first single, “Det som en gång var (det kommer aldrig igen)“, prompted my friend Rennie from starkweather to write: “A wonder it is, too. Can switch from classic melodic Dissection to the breakneck speeds of Dawn. Infused with a venomous vocal attack, bass work that cuts through the mix and isn’t afraid to call attention to itself with melodic runs, some clever guitar work that creeps up from out of the depths. Most enjoy the vocals and drumming on display.”

Need I say more? Well, probably not, but I’ll add that in addition to being a visceral rush, it also creates the kind of freezing moonlit atmosphere that makes one think of veils being parted at Samhain, permitting the intrusion of the dead, and it reaches heights of frightening spectral grandeur, coupled with moments of hypnotic ethereal wonder.

Länge Leve Döden is set for a January 13 release by Avantgarde Music. 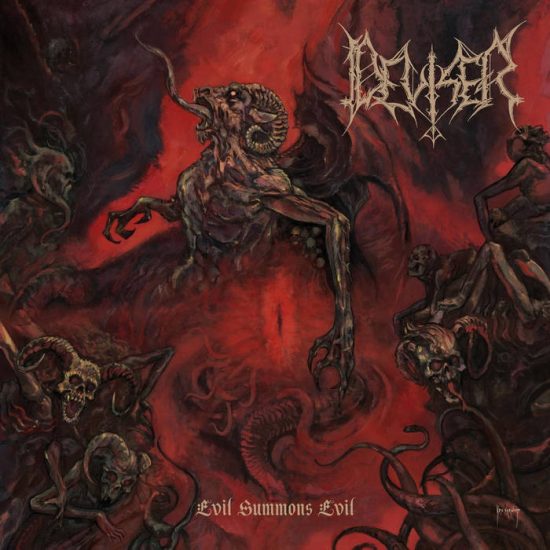 Deviser have been honing their Hellenic black craft since the early ’90s, but it’s been a dozen years since their last album, a space broken only by a 2017 EP and a trio of singles released last year (one of which, “Absence of Heaven“, I wrote about here), all of which will be included on a new Deviser album named Evil Summons Evil. And now we have another single from the album.

“Death is Life Eternal” is an encapsulation of infernal grandeur in almost every way, from the momentous booming drums and portentous swelling sounds of the song’s overture to the tyrannical stomp and the sinister exotic swirls of guitar and synth melody that then unfold, coupled with cauterizing screams, sometimes doubled for extra-startling impact.

The riffing eventually whips like a vortex as the drums and bass ignite, and the guitars throb just before symphonic synths soar and flow like the River Styx at high tide, leading to a finale of lush but haunting symphonic strings and piano to guide you across that river of death.

The riveting video directed by Haris Kountouris completely suits the music, and credit for the album’s production, mixing, and mastering goes to Psychon of SepticFlesh at SoundAbuseProductions.

Evil Summons Evil will be released by Hammerheart Records on February 10th. 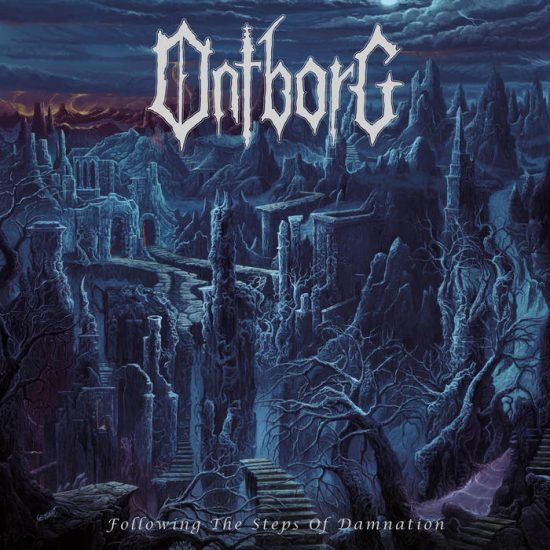 I didn’t know what to expect, having missed Ontborg‘s first album Within The Depths Of Oblivion, but what I found in this new song immediately grabbed me by the throat, with a combination of HM-2 heft and ringing melody. The heavyweight bass lines and neck-snapping drums are damned compulsive, but so are the slashing chords and throat-ripping vocals.

Fierce and feral, the song is also a mega-grooved experience, and the brazen and boiling riffage and wailing leads get rooted in the head with just one listen, but sad and somber moods also come through. Very nice video, too. 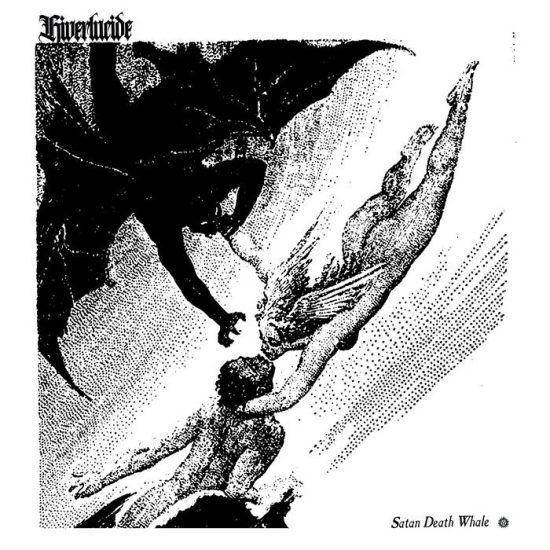 Now we come to that 20-minute track I referred to in the introduction. I’ve been waiting for it, because the members of the French collective Non Serviam have been touting the release of the album Satan Death Whale by their experimental side project Hiverlucide for weeks.

I mean, even if you knew nothing of Non Serviam‘s adventurous music, how could you resist the lure of an album title like Satan Death Whale? And if that weren’t intriguing enough, check out this preview of the album that appears on a Bandcamp page:

“Satan Death Whale, recorded in live conditions, is their first attempt at mesmerizing through whale chants. Lacking melody, and (de)generating a profoundly misanthropic atmosphere inhabitable for humans by exploring the tritone, with drone apparitions, unidentifiable organic human and animal sounds, electric guitars, and layers and layers of decadence.”

And then there’s this about “Whale“, the first song finally revealed from the record: “Fans of Sunn O))) and Tangerine Dream will appreciate this one as Hiverlucide takes us through the beauty, mystery and destruction of our oceans as we hear the cries of whales swimming through a harsh dissonant pool of guitars and synths.”

This is indeed an immersive experience in which recordings of whale song play a role, but in many ways it’s an unnerving experience, one that creates manifold juxtapositions — something like celestial choirs high above, and an immense undulating drone of subterranean depth; shrill piercing cacophonies redolent of pain and madness, moaning chords, and mutated organ-like tones that seem to ring in lunatic glory beneath the vault of an abandoned gothic cathedral; whirlpools of screaming agony bounded by the crushing of rock and the mangling of iron.

A hallucinatory sonic nightmare of destruction and despair, it roils the mind and puts the teeth on edge, and to become lost in it is almost inescapable. I’m very curious about the other two tracks, but kind of frightened to find out too.

Satan Death Whale will be out on March 3rd via Trepanation Recordings, Fiadh Productions, and Vita Detestabilis Records in a variety of formats 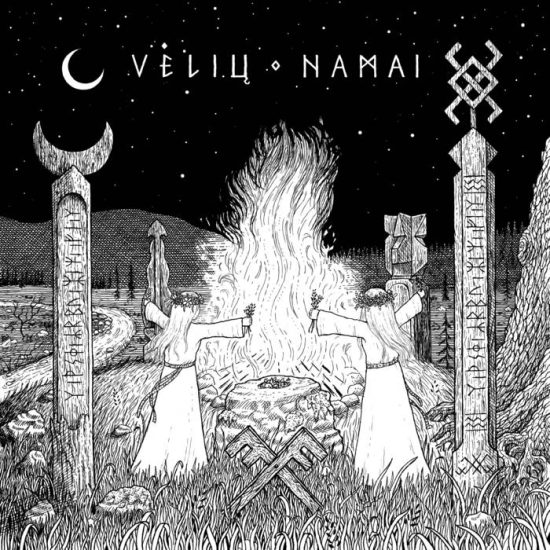 And to close, I have “Invocation of the Nine-Horned God“, the third single from an album named Alkai by the Lithuanian ritualistic dark-folk project Vėlių Namai, which will be released on January 20th by Nordvis Produktion. The band’s leader Julius Mitė made this comment about the song:

The song “Invocation of the Nine-Horned God” is about an inner journey to the world of Elnias Devyniaragis: an ancient Lithuanian mythological creature. Also known as the nine-horned deer, Elnias Devyniaragis is a totem that carries celestial bodies – mostly the moon, but also the sun – on its antlers. Devyniaragis is mentioned in archaic songs as an allegory to the position of the heavenly bodies. It is said that a white deer runs away at the solstice and returns at Christmas. In some Baltic songs, the deer is also a symbol of the sun’s return, as the mythological deer holds the sun in its antlers.

“Pulsating minimalism merges with vocals and shamanic percussion to create a hypnotic soundscape coated by mesmerizing melodies played on guitars, lutes, and ethnic string instruments such as the Turkish baglama, Lithuanian kanklės and Latvian giga”. That’s another description in the press materials.

As for this song, the lush, luminous, and pinging tonalities at the outset appealed to the Lustre-lover in me, and the big thump beneath them does have a primitive and ritualistic aspect, but eventually the beats begin to sound more modern. While mesmerizing, there are disturbances in these sounds, and they become much more pronounced after about three minutes in, as the music swells in volume and becomes more searing. Some kind of twanging instrument sounds a bit mad and a bit predatory, and the collage of other percussive ticks and tones contributes to the unearthly unease.