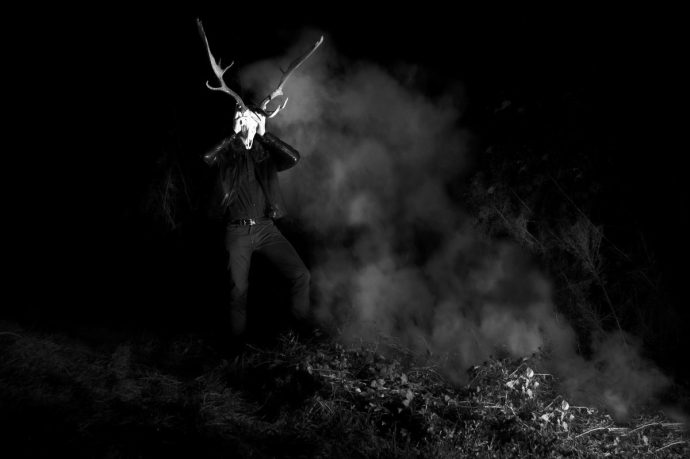 I forced open my sleep-crusted eyes and struggled to focus on the bed-side clock. Sluggish math told me I’d been asleep for 8 hours. Should be enough, I thought. But I couldn’t move, like someone had anesthetically severed my spine at the neck while I was out (but was instead the result of football-related alcohol poisoning). Before I could process any more thoughts I was asleep again. The next time I opened my eyes was 3 hours later, and then I didn’t have a choice. It was either climb out of the tangled covers or wet the bed.

As I begin writing this now, the clock says 9:30 a.m., and I haven’t picked a single thing for this column. The temptation to forget the whole thing is strong, but so is the inexplicable compulsion to let no day go by without making some recommendation for people who visit here. So here are just a few before my morning is completely gone. 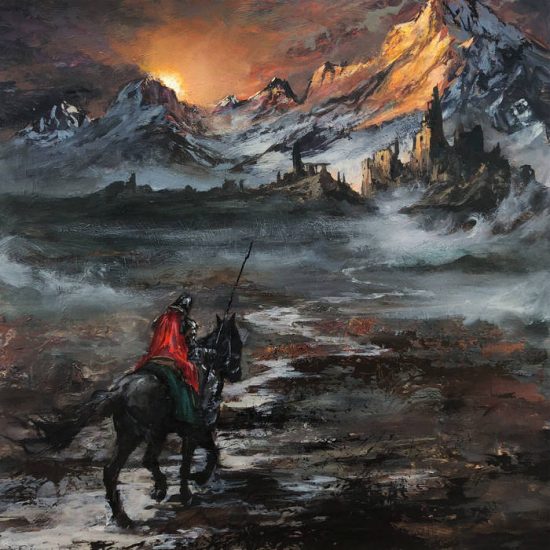 Blaze of Sorrow have arisen again, with a forthcoming seventh album (Vultus Fati) set for release by Eisenwald at the end of March. For the first advance track, they chose “Flammae“, which quickly blew the morning cobwebs out of my head.

On the one hand, the song is a fierce storm of fire, driven by winds that carry despair as well as fuel for the flames. The sound is expansive and sweeping, the vocals unchained in their savage intensity, the melodies glorious but dire and distraught.

On the other hand, the riffing transforms into a folkish dance, whirling around an explosive drum performance. That experience isn’t without its shades of darkness, but feels bright and resilient.

On the third hand, a soulful viola solo (by guest performer Eva Impellizzeri) is by turns thoroughly entrancing and infectiously vibrant (the rhythm section excels even there). And on the fourth hand, the fire in the music burns again, and the song swells to a heroic soaring crescendo of magnificent power (but the feelings of melancholy still survive within it).

Speaking of magnificence, the cover art for the album was created by Adam Burke, and you’d guess it was him without knowing it. 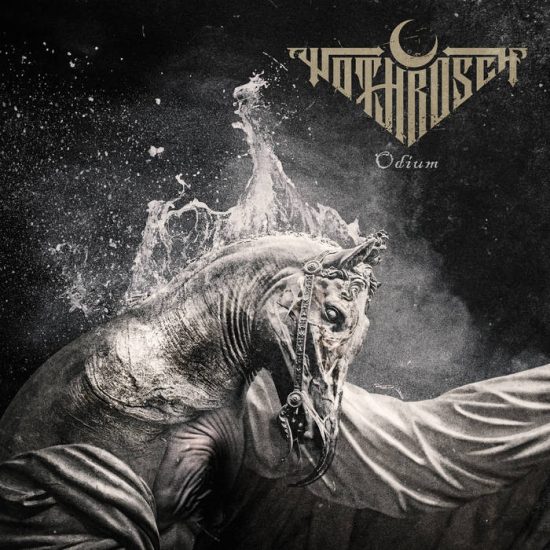 I wasn’t completely convinced that I should include the next video, which is a tale of occult possession and death (or transfiguration), mediated by electronics, that features writhing, blood-bathed female nudity. Is it exploitative, or at least too much so? I obviously decided it wasn’t, but instead was a fitting representation of the evil experience of the song itself, even if it makes it difficult to concentrate fully on the music. Of course, you’ll have to go to YouTube (here) to watch it — or you can just listen to the song-stream below.

Guest vocalist Niklas Kvarforth (Shining) himself sounds possessed. Hammerheart Records says the album as a whole sounds like “the soundscape experience of SepticFlesh clashing into the furiosity of Anaal Nathrakh“. At least in the case of this song, that makes some sense.

Following a brief intro, it assaults with overpowering intensity, drums blazing at a superhuman rate of speed, the riffing skittering and swarming with equally turbocharged acceleration, and above it all are sweeping symphonic blasts and searing cascades that help create the sound of some world-ending catastrophe.

The drumming switches gears repeatedly, but always returns to herculean violence. The music switches as well, and as the guitars warble and ring in less blistering moments they channel occult menace and allure behind Kvarforth‘s demonic utterances. But of course, the band and Kvarforth still have some world-ending to do, and they reach heights of spine-shivering intensity, as well as the infliction of bestial, lumbering cruelty — with a bit of sinister spell-casting at the very end.

“Mass” is from this Greek trio’s debut album Odium, which was just released last Friday by Hammerheart. I haven’t listened to the rest of it yet. 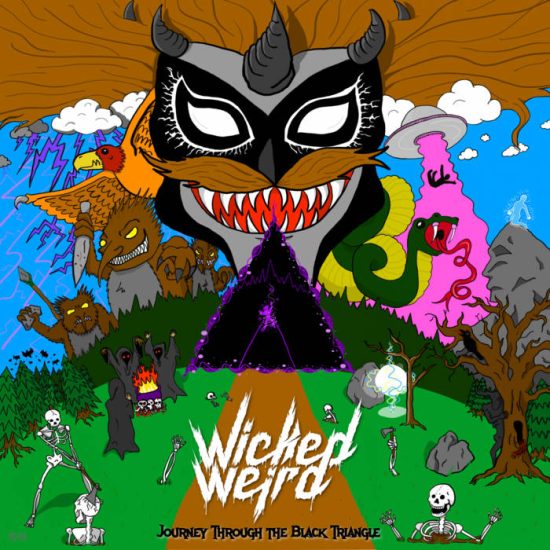 The cartoon cover art for Wicked Weird‘s Journey Through the Black Triangle might precondition you not to take the music seriously before you hear it, and that’s okay — as long as you actually do listen to it. I confess I went into it with a similar skepticism, but the track that plays first on Bandcamp set me straight.

Wicked Weird (the solo project of one Rook) describes the album as a concept inspired by the Hockomock swamp in southern Massachusetts. According to the band, it’s a treacherous place that’s known as “a hot-spot for paranormal phenomena”, sometimes referred to by locals as The Black Triangle. The album leads listeners on a journey deep into “bizarre woods”, crossing “the boundary where reality mingles with forces from another… more wretched realm.”

In keeping with that concept, that song set to play first (“Fire in the Sky“) uses pinging keys and eerily swirling synths to create a creepy, haunting atmosphere, and the ensuing vocals authentically sound like some ugly goblin lying in wait. But the song becomes a heavy hulking monster of sound, well-calculated to make a prisoner of your reptile brain, and the vocals transform into long, wild wails and macabre roars.

The booming, jittering, and pulsating grooves of the song are damned compulsive, and the synths reappear like poisonous mists. On top of that there’s a piercing solo whose high-flown wailing tones are ghostly and mad — with some more sonic oddities to follow at the end. 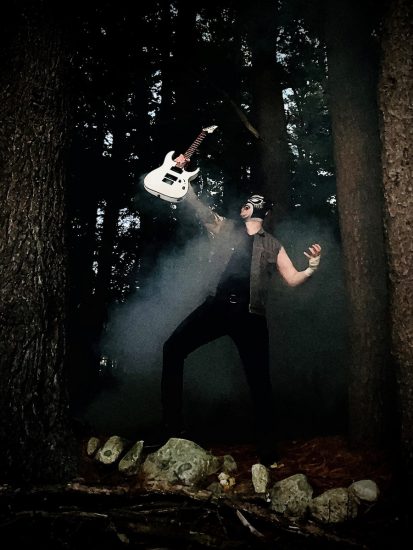 I’m afraid that the only other songs I’ve heard so far are the two that come next. “A Vortex of Paranormal Activity” fortifies the idea that the album is a frightening paranormal journey. It’s different from “Fire in the Sky”. Electronics again provide the overture, even more weird, chilling, and yet inviting, but this time when the earth-shaking grooves arrive it’s in the cadence of a grim march, and the slowly reverberating guitars sound dismal and oppressive, while synth-ghost continue to wail.

That seems like an interlude track, with the next song “Strange Display at the Ritual Site” bringing back the ugly, strangled vocals as well as turbulent rhythms, demonic riffing that writhes and slashes, leads that flicker and rise like tendrils of flame, a solo that sounds a bit like Ennio Morricone if he had a devil-twin in hell — and extravagant, theatrical singing.

So, these three tracks alone provide a pretty potent lure into the rest of the album — which I will definitely get to in time — and should make fans of horror metal (and maybe of Mercyful Fate) eager as well.