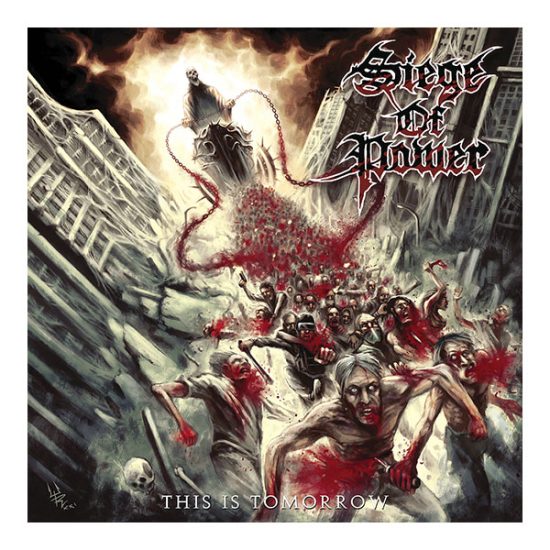 On the other hand, today IS a Saturday, and coming up I have both a work meeting and an NFL football playoff game I need to watch, even though the odds of our local team winning are remote, so to save time I’ve mostly dispensed with album art and order links, and cut back on the usual verbiage. I’ve organized these according to genre and style. Don’t forget I’ll have another column tomorrow, devoted to shades of black metal.

The song is “Force Fed Fear“, from a forthcoming second album by this super-group, the title of which is This Is Tomorrow. It will be out on February 17th through Metal Blade.

Prepare for “Total War“, which is the name of the song and a pretty accurate description of the music, which discharges stop-start musical munitions with the impact of automatic weapons, deleterious fretwork frenzies, vocals that scald, swirling soloing, and slowly cascading melodies of haunting eeriness and expansive sweep (war does create victims).

Time to turn down the heat a few notches with this next song and video. Prepare for a grim, stomping death march trailing high-flown guitar-wails of agony and grief, complete with slow pile-driving blows, seething guitar convulsions, harrowing roars of pain, and a general air of devastation and desolation.

The song is “Ashes“, and had its premiere at Decibel two days ago. It’s taken from God Disease’s upcoming second full-length Apocalyptic Doom, which is set for release by Gruesome Records on March 10th.

Staying in the generally low and grievously somber lane for this next one. Prepare for methodical, neck-snapping snare work that erupts in hurtling blasts (along with pulverizing booms); musing and muttering bass lines; minor-key riffs that ooze the ichor of pain and flare into seizures of agony; and vocals that elevate from gruesome growls to flesh-melting screams and wild cries.

The track is denominated “Disintegrate II“, but it’s merely part of an album-length piece named Disintegrate, due out on February 10th from Season of Mist.

Time to spin up the turbines again, with a song and video that have been out in the world since near the end of last year but I only checked out today.

Prepare for growls, grunts, gurgles, and pig squeals galore; guitars that whine, slash, squiggle, and squirm at high speed; severe rhythm-section beatings; a scattering of megaton detonations; and a general air of frantic mayhem. Plus a confused-looking dude gazing at the ocean, the skies, and the ground, pondering some momentous and apparently life-threatening decision.

The song is “The Defying Symphony of Universal Dissonance“, a single released by Willowtip on December 27th.

The song is “Sirius, Draconis, Capricornus“. It’s from the band’s new album XUL, coming out on April 7th.

Prepare for a song about the insanity of humanity, which agrees with the view that “the common denominator of the world is not harmony, but chaos, hostility and murder”.

More specifically, prepare for both punishing, bunker-busting grooves and unhinged drum mania, for violently berserk riffing and string torture that screams in derangement, for moments of dismal and dragging hopelessness, and for a panoply of heartless growls and crazed yells. Musically, it captures the lyrical themes damned well.

The song here is “Panzram“, digitally released just yesterday by the Austrian label Kvlt und Kaos Productions. It points to a new Thunraz album coming out in April.

Well, we haven’t had any black metal yet, so let’s start fixing that, albeit with some unconventional songs.

Prepare for a sudden drumwork maelstrom, racing guitar trills, and a soaring violin melody that seems to channel a frantic grasping for hope, followed by scorching shrieks, long chords of agony and despair; soft glinting tones of melancholy, with gothic vocal intonations; and the ignition of a furious, gale-driven sonic conflagration. Plus instructions about how to make a protest mask from a t-shirt.

The song is “Ancient Light” and it comes from Dawn Ray’d‘s new album To Know The Light, which will be released by Prosthetic Records on March 24th.

Staying in the lane of unconventional black metal. Prepare for a song with a slow, mysterious, and seductive overture, whose spell segues into sounds of darting, and sparkling vibrancy, which then unfolds into greater expansiveness and beauty. And then there’s still 9 minutes left to come, in a song that does sound like a journey or a ritual.

The guitars dance in ecstasy and engage in mercurial proggy maneuvers as the bass rumbles, the drums tumble, and a voice howls like a wounded bear. The energy builds and builds, but signs of distress also emerge, and the song descends into droning undercurrents and acoustic guitars plus piano keys that collectively sound wistful and wondering.

The song is “Rending of Dyadic Convolution“, a new Velnias single released a week ago by Eisenwald.

And finally for today, prepare for a whirlwind of blazing, blaring, and deliriously cavorting guitars, drums that pop and spit bullets — which suddenly switches into low drones and an exotic stringed-instrument arpeggio — and then switches back to an even more savage delirium (though that vibrant arpeggio is still there), with vicious goblin snarls and wildly pulsating fretwork in the mix. It builds to a crest, where a glorious guitar solo is waiting, and culminates in a heroic finale.

The song is “Conqueror Beyond the Frenzied Fog“, and I don’t mind saying it’s my favorite song of all in this collection. It’s from Lamp of Murmuur‘s new album Saturnian Bloodstorm, which will be released by Argento Records on March 26th.