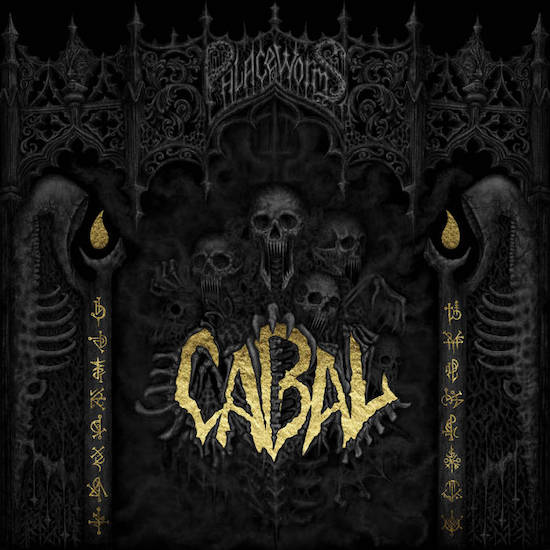 (Our old friend Justin Collins returns to NCS with this guest review of a new album by Palace of Worms, which is set for release on February 3rd by Acephale Winter Productions.)

I’m going to say upfront that I’m not going to be able to do full justice to Palace of Worms‘ latest (and possibly last) album, Cabal. That’s because the very act of describing all of the sounds that have gone into it makes it sound slightly insane. Broken down to their component parts, a lot of these songs have no business being as good as they are, but yet, here we are. I wouldn’t be writing this if the album was a haphazard mish-mash.

Palace of Worms has always been roughly categorized as black metal, although that’s as much because we’ve all decided that’s the easiest way to categorize it, in spite of the fact that there’s always been a fair amount of outside influence. Even the last full-length, The Ladder, had a pretty solid core of black and post-black metal, but had plenty of other influences. The album’s very first track started out with a ripping hammered dulcimer riff courtesy of Botanist‘s Otrebor, after all. 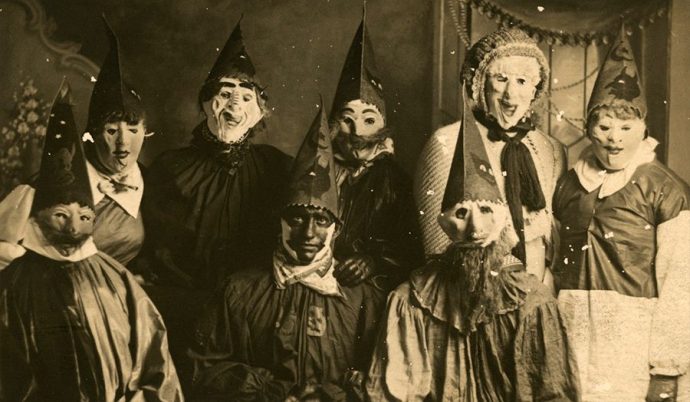 Cabal does another changeup. You’d be forgiven for thinking someone just started The Good, the Bad, and the Ugly when the Ennio Morricone-inspired intro to “Telepathic Crucifixion” kicks in. That’s a little bit of a mislead, though, as Cabal finds Palace of Worms in gothier, creepier territory than previous albums. Main man Balan‘s growls are largely in the death metal domain, but there are plenty of low, clean lines that put me pleasantly in mind of Peter Murphy. “Through the Dark Arches” and album closer “Winterbird,” in particular, use this sound to great effect.

The vocal surprises don’t end there, though, because “Rebirth of Nihil” features Bezaelith of Lotus Thief and Forelesen fame. Her soaring melodies are instantly recognizable, and she’s just one of many collaborators, including Dylan Neal (Thief) and Otrebor (Botanist), all of whom have worked on music I’ve been geeking out on for over a decade. (While writing this review, the realization that the first Botanist album came out over 11 years ago definitely made me feel old and creaky.)

Beyond the vocals, this is an album filled with catchy, doomy riffs. “Catchy” is a dirty word sometimes when it comes to more extreme music, but I think we can all be honest here: As much fun as listening to some bizarre experimentation written with twelve-tone scales at 230 beats per minute can be, there’s nothing wrong with a riff that you keep humming all day. Doomy goodness abounds, with “Through the Dark Arches” giving us a crunchy riff that would make Tony Iommi proud, on top of some cool, echoing arpeggiation and some jamming syncopation closer to the end of the track.

And I haven’t even touched all the other goodies: bits of organ and synth, a sax solo in “When the Stones Come Tumbling Down” that could have been from an ’80s cop flick, if it weren’t for the fact that it’s just a bit too outre for smooth jazz. If I had to nitpick, there’s one instance of oddness that didn’t work for me: The outro to “Rebirth of Nihil” is over two minutes of low, white noise, maybe like the sound of idle machinery. Don’t get me wrong–this is a nitpick–but it stuck out at me because it’s the next to last song instead of an album outro.

But that’s two minutes of an hour of otherwise genuinely dark, enjoyable music. Even the title track manages to mix together a funky bass groove growing into something a bit louder and more ominous in just under three minutes, and this is a case where lesser musicians could have easily just created self-indulgent album filler.

As I said before, I don’t know why this all works as well as it does. I could try to intellectualize it, but it’s entirely possible my wide-eyed, “Oooh, check that groove out!” approach is just as valid. I don’t know if this is truly Palace of Worms‘ swansong, but even if it is, I hope we get more of this from Balan in one form or another.

Listen to the album’s first track below. In addition, “When the Stones Come Tumbling Down” is streaming at NCS here, and “Bizarre Blood and Exhumations” is streaming at Black Metal Daily here.