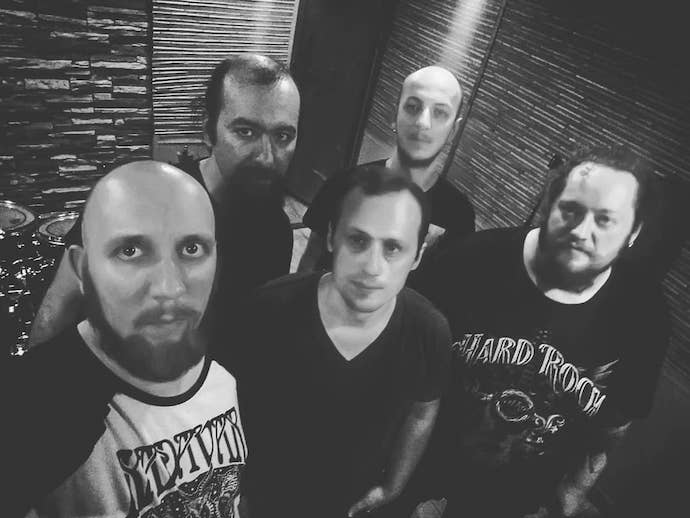 (Here we have Comrade Aleks’ very engaging interview with Georgiy Bykov, a key musician with the Russian band Mare Infinitum, whose newest album was released near the end of last year by Solitude Productions.)

I didn’t expect any new releases from the Russian doom-focused label Solitude Productions during 2022, because the label was put on hold after infamous events which started in February 2022. But somehow they managed to release Cryosleep, the third album of the Moscow-based band Mare Infinitum.

The band was founded back in 2010, and its albums Sea of Infinity (2011) and Alien Monolith God (2015) received a warm welcome, so the band often played live, joining almost all the local doom festivals during the past decade. After a seven year long break and some line-up changes Mare Infinitum returns, and their new material differs significantly from the good old death-doom stuff we expected from them.

The band’s founder Georgy Bykov tells how they lived through these seven years and passed the genre’s borders.

Hi Georgy! How are you? What’s going on in Mare Infinitum?

Hi! We have just released a new CD and are now rehearsing for future performances! The mood is generally good.

The band’s previous album Alien Monolith God was released aeons ago – in 2015. It seems like it was another age, another place. How did you spend these seven years between albums?

We have spent these years quite fruitfully. We performed at various events. For the first time we went to the Dutch Doom Days festival abroad in the Netherlands. We were the first band from Russia to perform there. We also improved our professional skills, and I think you can hear it on the new record. 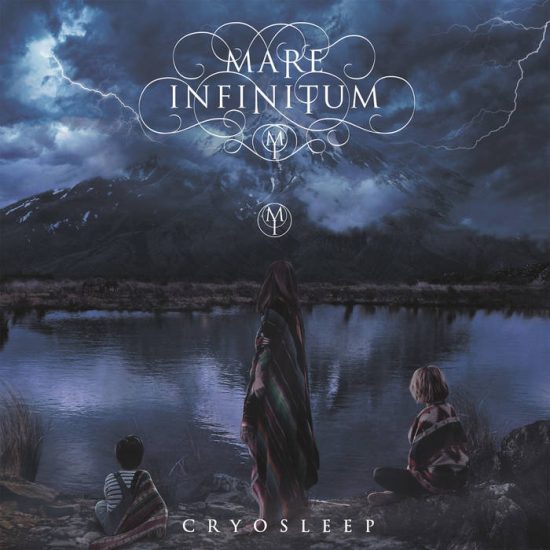 Are you meaning that you kept on rehearsing during this seven years break constantly?

Yes, of course. We’ve been rehearsing and performing all these years. The only break in rehearsals was from March 2020 to June 2022.

Did this trip to the Netherlands affect the band’s reputation significantly? Did you get more invitations from gig organizers or labels from abroad?

That concert was great. Many people still remember it and write about it in social networks. There were no new offers, but nevertheless, judging by the reviews, people in other countries were waiting for our new album.

Cryosleep was released by Solitude Productions on December 16th. Do you feel it was the right time to release music?

I think so. Guessing about the future and calculating options for its development is a thankless task. In my opinion, you need to do what you can, as well as possible and right now. Our task is to make music and this music brings a good mood to someone. So yes, everything is on time.

There was high activity back in the band’s early years — there was a local doom metal scene, there were festivals, and so on. How did the situation change during the last few years?

2020 was a turning point in a bad way. Those plans that were in place, failed. Some sites have closed, someone just doesn’t want to organize events. Now some local concerts are held, but mostly they are made by bands on their own. The number has certainly decreased, but there is still some activity.

And what about Moscow’s doom scene? It doesn’t look as alive as before.

To be honest, I haven’t been to local concerts for a long time and it’s hard for me to say what state everything is in. But nevertheless, I have seen that events on the topics periodically take place. 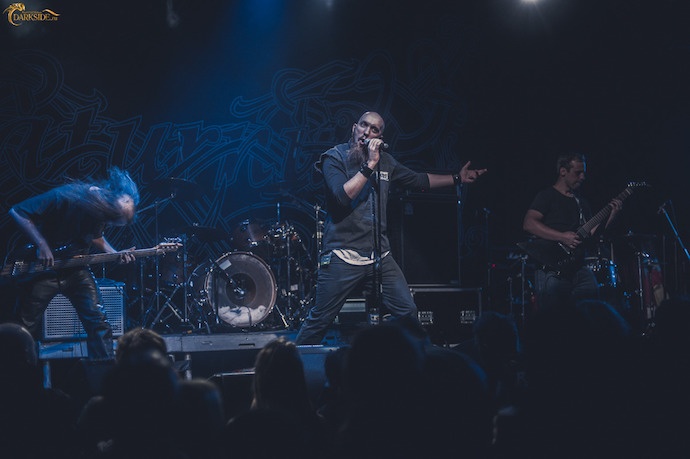 How often did the band play during 2022? Do you plan to support the Cryosleep with gigs?

We haven’t performed since 2019. First the pandemic, then the long work in the studio. In parallel, there were very difficult events in my family, my mother is passed away. Therefore, there was no time for concerts. I didn’t have any strength to go on stage and even rehearse with the cast. Now there are a couple of proposals for live performances, and there will be announcements soon.

Accept my condolences… Mare Infinitum’s first album Sea of Infinity dealt with abstract death-doom topics, and you turned to Lovecraftian myths in your second album Alien Monolith God. What’s now? What are Cryosleep’s songs about?

The songs on the new album are essentially about ordinary life.

“Your Final Bow”. This song is about our friend Roman, the bass player in the first Mare Infinitum line-up. His sudden passing away for us is still too hard a blow to take. Today, in these dark times, we miss his wise advice and sense of humor that brought us so much positive energy.

“The Flight of No Return”. This song is about Flight 612 (Anapa – St.Petersburg) when aeroplane crashed in the storm. We tried to honour the memory of the victims and to raise the question: what lesson should we learn from this tragedy? Although the words are too weak to describe the deepness of emotions…

“Event Horizon”. This song is about the great scientist Steven Hawking. And it’s based on allusion. All his life Hawking explored the black holes – time-space that exists within its event horizon. And he lived in a black hole of his own paralyzed body. Although his flesh was weak, his spirit and his will always prevailed.

“Cryosleep”. This is a story of three Incan children that were sacrificed about 500 years ago. Their buried corpses were found on the 16th of March 1999 at the top of the Lullailaco mountain. These innocent victims were drugged by the superpotent substances and then laid in a small tomb 1.5 meters deep, left to die. Today you can find these mummified bodies in the Museum of High Altitude Archaeology in Salta, Argentina.

“Celestial Escapist”. Briefly, it’s our version of Pink Floyd’s “Learning To Fly”. If you’re a melomaniac, you may find the influences of many other bands and styles.

By the way, was it your initial idea to record the Alien Monolith God album partly based on Lovecraftian stories? Or did Andrei just bring you texts he had at that moment?

The theme of the lyrics on the previous albums was determined by Andrey. The lyrics were composed to ready-made music. So there was no original concept.

How does death-doom help you to represent those cosmic horror pieces?

I’m not focusing on the style anymore, but on the idea and its implementation. If the idea is good, conveyed well, then it will work. That’s all.

How long did you work over the new material? Was it one recording session or did you record the album song by song?

The material is being composed constantly. Individual fragments appear and wait in the wings. When such fragments accumulate enough, a song is obtained, or rather its main skeleton. Next comes the work on the arrangement and the final alignment of the composition. In “The Flight of no Return”, for example, there are fragments that appeared back in 2009, and one of the riffs of “Celestial Escapist” was conceived in 2010. Therefore, the writing process is ongoing. Now, for example, there are already ideas for the next album.

Are you exited enough now to start working over new songs immediately? Do you have a general vision of new material?

Yes, I want to create new songs. Now new ideas are gradually being collected. Something is left from the past, something is being composed right now. As soon as there are enough ideas, songs will be produced. Now there are about two or three song ideas, plus various disparate pieces. I already have the name of the next release, but it’s too early to voice it yet. The concept may change in the course of work, so let’s see what happens in the end.

This time you have a great company of guest vocalists and musicians. How did it happen that so many people were involved in the recording of these five songs?

I’ve been planning to invite a choir for a long time. There are moments on the last recording that can be called choral singing, but there it was just a few tracks sung by Ivan and Olesya – our singers. Andrey, our former vocalist, also used this technique in his parallel project Abstract Spirit and everything sounded great. I decided to go further and expand this sound as much as possible. When I was working on “The Flight of No Return”, it became obvious that a choir was simply needed here. And then this idea was already used in other songs.

A track recording of different voices does not give an effect comparable to the sound of a full-fledged vocal group. That’s why we found professionals who sang everything as we needed. 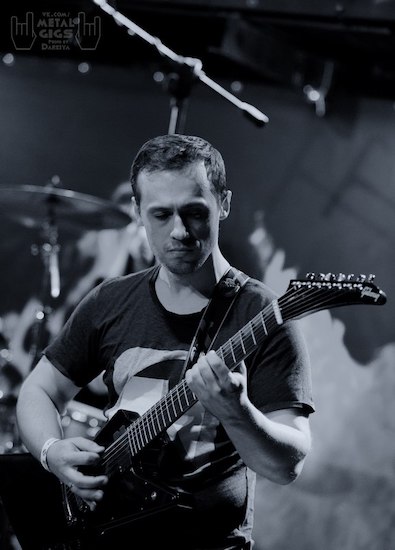 Was it easy to compose Cryosleep taking in account all choirs and pompous arrangements?

This is the most difficult job of all time. Both in the structure of the songs, and in harmony and arrangement. Each stage of the work required a lot of patience and attention to every detail. It is difficult to put into words the efforts that were spent, but most importantly, the result was worth it.

How did you organize the choir’s recording sessions?

Initially there was a demo and there was harmony that I would like to see in the choral moments. I sent it to the conductor (Taras Yasenkov), after which we met and he made a distribution of voices based on harmony. On the advice of Taras, in some moments we left the role of vocalization to the choir (in other words, singing without text), and in some moments we gave the choir the text to sing. Then I checked the notes myself for harmony, because not everything was heard clearly in the demo. Then came the moment of recording. Taras has already worked with Sergey “Lazar“, so we recorded everything with him. 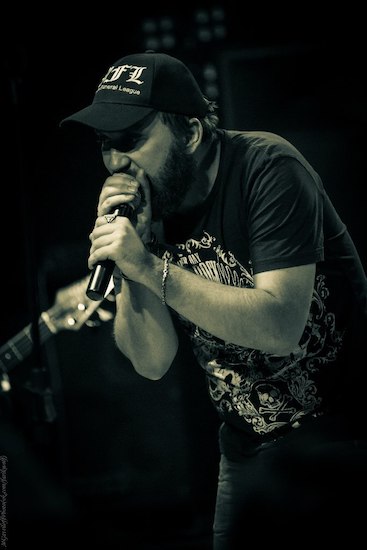 Are there any other difficult moments on this record that you are proud of having overcome?

There are many such moments on this record. Perhaps the most difficult are the finale of “Celestial Escapist” and the culmination in the middle of “Cryosleep“. Polyphony is always difficult, but thanks to Ivan and Dmitry (the author of the lyrics) we have solved all the tasks together.

How do you see Mare Infinitum’s prospects now? What are your plans for 2023?

It is difficult to talk about the prospects now, time will tell. But we will definitely continue to do the same as before. Compose, rehearse and perform.

Thanks for the interview Georgy! I wish you all the best with pushing Mare Infinitum onward. Would you like to add a few more words for our readers?

Thank you for your questions and suggestions! I can wish everyone good health and optimism, spend more time with family and friends. Whatever happens, we must not lose heart and do what we can as well as possible!