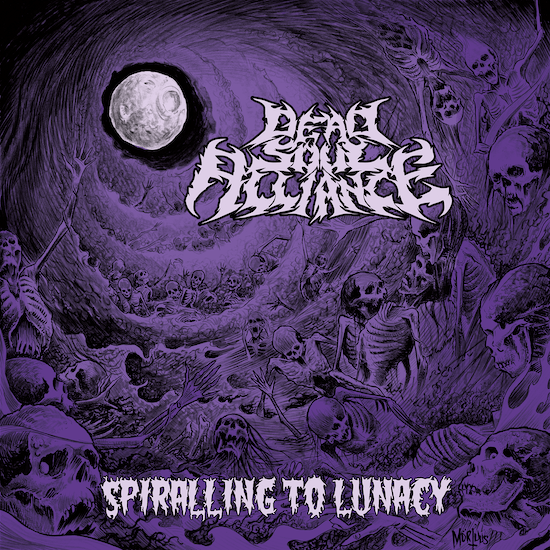 We’ve enjoyed watching the relentless forward progress of the Canadian death metal band Dead Soul Alliance, from the first self-titled demo in 2011 to the 2013 EP Proud To Die (reviewed here), the 2017 EP Slaves to the Apocalypse (reviewed here), and the band’s debut album, Behind the Scenes (for which we hosted a song premiere here). And now we have a new reason to howl the band’s praises because they’ve got a second album storming toward a February 17 release by the Cryptorium9 label.

Once again, vocalist and multi-instrumentalist Wolven Deadsoul is in charge, again joined by drummer E.H., and together they’ve created a swift nine-song, 32-minute experience that bears a fitting name: Spiralling to Lunacy. How fitting is it? You’re about to find out, through our premiere of the album track “New Normal Nihilist“. 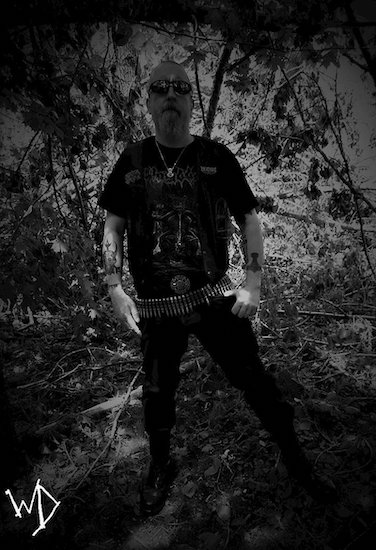 Dead Soul Alliance have repeatedly demonstrated a talent for harnessing classic strands of death metal from both sides of the Atlantic, but with particular debts previously owed to the likes of Grave, Benediction, Asphyx, and Unleashed — and in doing this they’ve created dynamic, well-crafted songs that hit home in multiple ways, capable of mounting brutally crushing doom-laden assaults, convulsing in violent, ripping and tearing spasms, and simultaneously stitching in mood-changing and memorable melodies.

Which brings us to the alliterative “New Normal Nihilist“.

Dead Soul Alliance launch the song with a harsh, mauling, but quickly head-hooking riff that then becomes more maniacally savage when a shrill lead guitar eerily spirals upward from the rampage and the drums begin putting the hammers down. With the words coming in vicious, serrated-edge howls, the riffing feverishly writhes and warps as the bass thunders and the drums blast away, creating a whirling maelstrom of madness.

That piercing lead guitar continues to make its presence known, rapidly spinning and wailing like an increasingly demented and delirious ghost, and the tremolo’d chords rise and fall in ways that seem to channel agony in the midst of derangement. There’s no relent in the rampaging pace, but the elaborate layering of the guitars in all their tones and the rapidly changing drum patterns make the song a dynamic and relentlessly gripping attack.

There are two big take-aways from the song: Dead Soul Alliance may be building on venerated traditions, but this doesn’t sound like some rote re-tread of “old school” death metal. And its brazen and bewildering ferocity do indeed signal that Spiralling to Lunacy is a very fitting name for the new album — which is up for pre-order now: