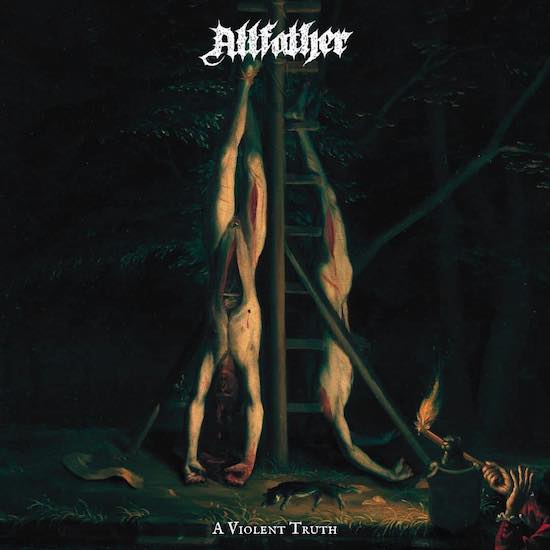 We’ve been avidly following UK-based Allfather since their first EP release in 2015, sort of like a dog madly chasing after a semi-truck and hoping not to get run over. As our own Andy Synn wrote in the context of reviewing their last album, 2018’s And All Will Be Desolation, their music has been “heavy and heartfelt,” the kind of experiences “where you can practically feel every ounce of blood and sweat and tears” that go into their creation.

And let’s underscore heavy, because their Sludge-injected, Hardcore-inflected, proto-Death Metal sound has been potent and punishing. Getting run over and flattened by the music has always been a serious risk.

In the years since that last album, and especially during the last two years, the world seems to have rapidly been descending into a burning cesspool. With an active moral and political conscience, Allfather could not help but react to that in the music they’ve made. They wrote and recorded a new album named A Violent Truth across these last two years of “global pandemics, increasing oppression, and the slow creep of contemporary fascism”, and (to quote further from their label’s preview) “the album captures and distills the pent-up fear, anger, and exhaustion of living in desperate and seemingly hopeless times”. 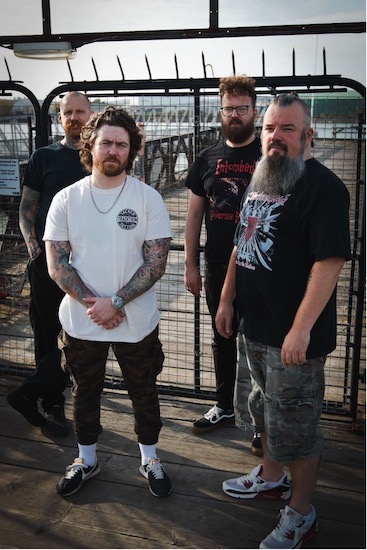 It’s also described as “the sound of four friends celebrating their love of death, sludge, thrash, and black metal, and the dopamine hit of breakdown-heavy hardcore”. Allfather themselves say: “We didn’t choose the times that A Violent Truth was created in, but we made this album because rage and The Riff were the only weapons we had to hand. Sometimes all you can do is plug in, play loud, and speak the truth.”

As a preview of what the new album brings us, today we’re premiering its first single, a song called “Take Their Eyes“. As for the subject matter of this song in particular, we’ll again turn to the band’s own words:

“‘Take Their Eyes’ is about how all around the world, oppressed communities are given little choice but to try and drive change through protest and how this is almost always met with condemnation and violence from both those who oppress and those who claim to support those communities but find those desperate acts of protest and violence doesn’t fit with their sensibilities. The oppressed do what they need to survive.

“Musically, this track allowed us to explore both a more hardcore punk and black metal style of approach than we’ve previously been able to, without losing the spirit of what makes Allfather sound like Allfather“.

Emotional intensity is a big part of what makes Allfather sound like Allfather, and there’s no shortage of that in “Take Their Eyes“, whether it’s the feelings of dismay and grief that ring through in the song’s opening or the blazing and skittering fretwork, the hammering drums, and the scalding vocals that soon follow. Adrenaline floods through the music as it channels rage and disgust, and even when the pace slows, the ensuing wail of a guitar solo is equally gripping.

The song is relentlessly dynamic, and so what follows that solo is an explosive convulsion of blasting drums, unhinged screams, and roiling riffage, coupled with a dose of jolting groove and braying guitars. And yes, following a dose of feedback, bone-grinding bass tones, and savage snarls, the song inflicts a pavement-cracking, muscle-moving hardcore breakdown.

A Violent Truth will be released on March 31st by Trepanation Recordings, on CD, cassette, and digital formats, and pre-orders are beginning today. We’ll have more to say about the album as a whole in due course.

2 Responses to “AN NCS PREMIERE: ALLFATHER — “TAKE THEIR EYES””