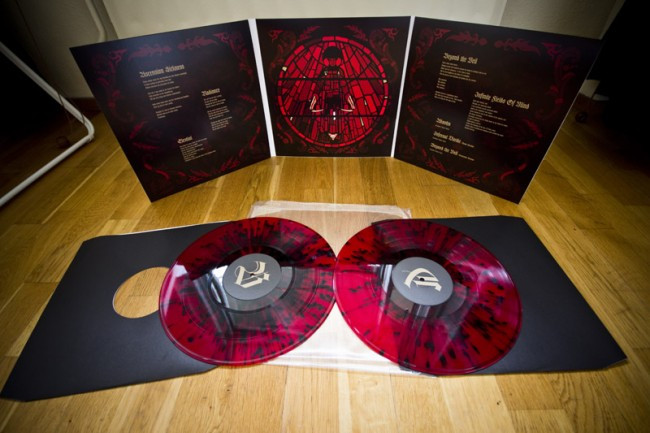 On July 2, we reported the unfortunate news that USBM band Abigail Williams will be calling it quits after a farewell U.S. tour that starts later this month and runs into September. As a result of that post, we made contact with a relatively new non-profit organization based in Helsinki, Finland, named Blood Music.

Among other things, Blood Music raises money for its activities by releasing vinyl versions of previously released metal albums. For example, they have released vinyl versions of albums by Maudlin of the Well and in the near future they’ll be releasing a 7 LP box set of music by Strapping Young Lad. But the subject of this post is Blood Music’s release on vinyl of the first and the last works by Abigail Williams — the Legend EP and the band’s 2012 full-length, Becoming. There are five previously unreleased bonus tracks included on Legend (turning it into an album-length record) and three on Becoming (totaling more than 27 minutes) — and everything was remastered by the band’s frontman, Sorceron, from the original 24-bit mixes.

To help spread the word about Blood Music, they’re running a contest where the winner will receive a free copy of the sweet colored vinyl edition of Becoming pictured above. This is a double LP, with the pressing limited to 150 copies worldwide.

To enter the contest, you’ll need to like the Blood Music Facebook page (here) and share the photo on FB that you can find via this link.

Of course, Blood Music is also selling the colored pressings of both albums (though they’re nearly sold out of those) as well as the black vinyl pressings of both (also limited to 150 copies each). To check those out, HERE is the link to Blood Music’s store. And THIS is the link to Blood Music’s web site. After the jump is a pic of the colored vinyl version of Legend. END_OF_DOCUMENT_TOKEN_TO_BE_REPLACED