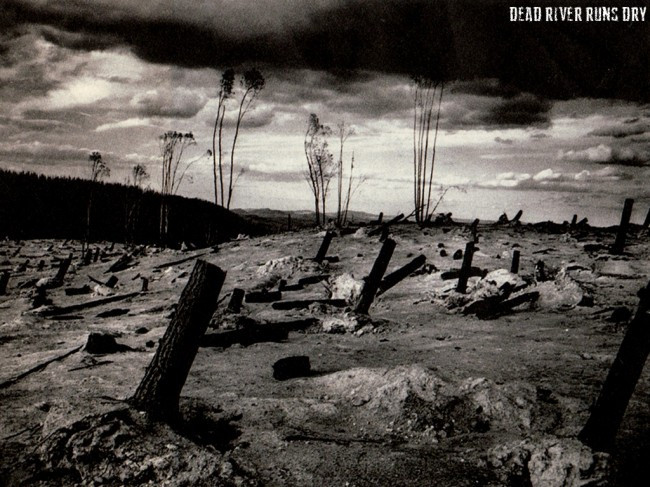 Well, despite my predictions earlier today, I managed to find time to write another post. To be more accurate, I came across a new discovery that compelled me to make time for another post.

Dead River Runs Dry is an Australian band who e-mailed me early this morning. In fact, the e-mail was the first thing I saw when I fired up my computer after dragging my sorry ass out of bed following a grand total of 3 hours sleep. In a fit of impulsiveness I decided to listen to their music before moving on to anything else because I liked their name. It didn’t hurt that they also linked to a laudatory feature about themselves, with an accompanying interview, that appeared at DECIBEL magazine’s web site (though I read that only after listening to the music).

They’ve self-released a four-song demo entitled Winter that they’re distributing for free, and that of course was another plus. And the final plus is that Winter kills.

With their music, Dead River Runs Dry paint a portrait of a torn and blasted wasteland — damned, desolate, and dangerous. Yet it’s a landscape with its own bleak beauty and vibrance. END_OF_DOCUMENT_TOKEN_TO_BE_REPLACED