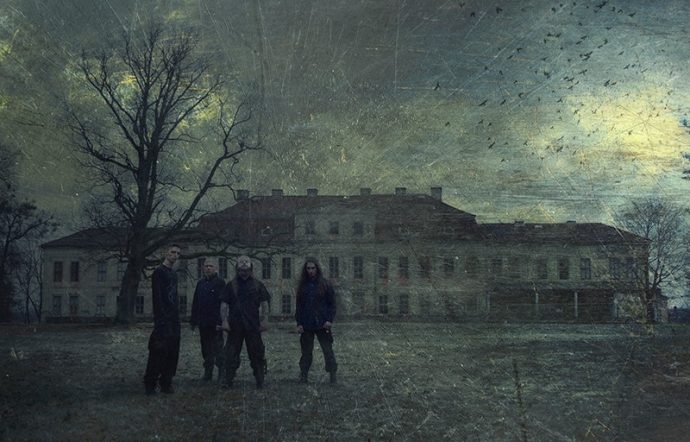 Almost three years ago we had the pleasure of premiering a full stream of Godless, the fourth album by the Polish death metal destroyers in Disloyal, which held intrinsic appeal for fans of classic Morbid Angel, as well as Hate Eternal, Immolation, Death, and Gojira. We now have the opportunity to provide a reminder of Godless, and to introduce new listeners to Disloyal, through our premiere of a video for a Godless track named “On the Ashes of the World“.

As we observed when we premiered the full stream of Godless, Disloyal revel in creating songs that keep you off-balance, with tempos that turn on a dime and changes in mood that are equally variable, switching from absolute decimation to eerie atmospherics without warning. And that’s really what made the album such a stand-out — the technical skill of the musicians is abundantly evident, but they harnessed that talent within the structures of songs that were creatively written to take your mind on an exhilarating roller-coaster ride.

The songs also include thoroughly bestial vocal vehemence and a collection of mind-bending guitar solos that often contrast with the surrounding savagery of the music, not to mention a big helping of bone-breaking grooves and morbid melodies.
END_OF_DOCUMENT_TOKEN_TO_BE_REPLACED

About one week ago we had the pleasure of premiering a new song by Poland’s Disloyal from their new fourth album, Godless. Today we deliver unto your ears a premiere of the entire mind-blowing album.

Disloyal have been around since the late 1990s, though the current incarnation of the band reflects significant changes in membership, with only drummer “Jaro” Paprota remaining from the group when it was first formed. The line-up now includes guitarist Artyom Serdyuk (Deathbringer, Thy Disease, Amentia, Woe Unto Me), bassist Kolya Kislyi, and vocalist Krzysztof Bendarowicz (Deathbringer).

Godless also manifests some stylistic changes compared to Disloyal’s previous releases, and the result is a creative death metal powerhouse that’s both savage and brain-twisting. END_OF_DOCUMENT_TOKEN_TO_BE_REPLACED

Poland’s Disloyal have been recording music since the late 1990s, with three albums to their credit, beginning with 1999’s Pessimistic. There have been significant changes in Disloyal’s line-up over the years, with only drummer “Jaro” Paprota remaining from the group in its original configuration, now joined by guitarist Artyom Serdyuk (Deathbringer, Thy Disease, Amentia, Woe Unto Me), bassist Kolya Kislyi, and vocalist Krzysztof Bendarowicz (Deathbringer). The new line-up have recorded a fourth album entitled Godless, and today we bring you the premiere of the album’s seventh track: “Mors Imperator Mundi“.

With so many changes in the band’s line-up since their last album (2008’s Prophecy), it’s perhaps reasonable to consider Godless a new beginning, and this new song is a sign of the changes. END_OF_DOCUMENT_TOKEN_TO_BE_REPLACED