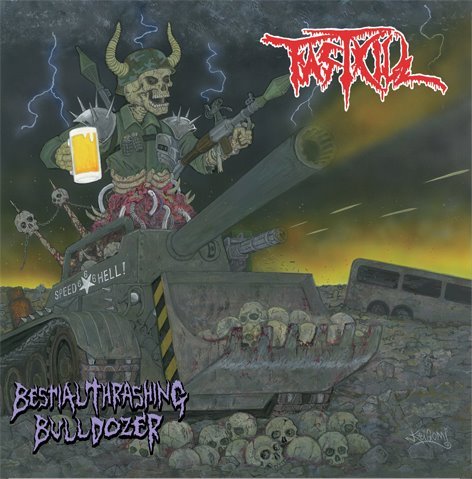 I’m so easily diverted from my plans and projects. When it comes to this blog, the occurrence of coincidences tends to distract me like few other things do. I don’t think I’m any more superstitious than the average joe, but coincidences in my metal browsing seem to blare forth commands: STOP WHAT YOU WERE DOING AND WRITE ABOUT THIS NOW!!! And so I do.

I’ve been thinking about thrash today, prompted by our publication of TheMadIsraeli’s review of Kreator’s new album, Phantom Antichrist. As I’ve explained before, thrash is one of the few metal genres that I can only take in small doses. I don’t deny that good speed metal is energizing, and like most metalheads, I do appreciate a catchy riff and a shreddy solo. But so much thrash sounds so much alike to my ears that it can become numbing. And I guess I’m one of those people who TheMadIsraeli chastised for not being enamored of the traditional thrash vocal style. That’s not intended as an artistic criticism. I’m pretty sure it’s just a matter of taste.

Anyway, while pondering these subjects and trying to reflect with part of my brain on why I’m not more enthusiastic about thrash, I came across two pieces of thrashy metal from new albums that Pulverised Records will be releasing in North America on August 14 (both of which can be pre-ordered here). One is a new song by a Japanese speed-metal band named Fastkill, and the other is a previously released song that I overlooked from that very long-running death metal band (now based in The Czech Republic), Master. I got a kick out of both songs, and I’m trying to figure out why. END_OF_DOCUMENT_TOKEN_TO_BE_REPLACED