I’m so easily diverted from my plans and projects. When it comes to this blog, the occurrence of coincidences tends to distract me like few other things do. I don’t think I’m any more superstitious than the average joe, but coincidences in my metal browsing seem to blare forth commands: STOP WHAT YOU WERE DOING AND WRITE ABOUT THIS NOW!!! And so I do.

I’ve been thinking about thrash today, prompted by our publication of TheMadIsraeli’s review of Kreator’s new album, Phantom Antichrist. As I’ve explained before, thrash is one of the few metal genres that I can only take in small doses. I don’t deny that good speed metal is energizing, and like most metalheads, I do appreciate a catchy riff and a shreddy solo. But so much thrash sounds so much alike to my ears that it can become numbing. And I guess I’m one of those people who TheMadIsraeli chastised for not being enamored of the traditional thrash vocal style. That’s not intended as an artistic criticism. I’m pretty sure it’s just a matter of taste.

Anyway, while pondering these subjects and trying to reflect with part of my brain on why I’m not more enthusiastic about thrash, I came across two pieces of thrashy metal from new albums that Pulverised Records will be releasing in North America on August 14 (both of which can be pre-ordered here). One is a new song by a Japanese speed-metal band named Fastkill, and the other is a previously released song that I overlooked from that very long-running death metal band (now based in The Czech Republic), Master. I got a kick out of both songs, and I’m trying to figure out why.

This band’s new album, Bestial Thrashing Bulldozer, is actually slated for release in Europe on July 9 and will be their first full-length release in four years. I’m not familiar with their music, and all I’ve heard from the new album is the one track that Pulverised started streaming yesterday: “Die In the Pentagram”. It’s really fast. I mean really fast. The riffs are kind of squirmy and nasty, like a disturbed swarm of maggots feasting on some fresh guts. The vocals are a kind of raw, punk-like yelling that aren’t quite what I think of as the standard thrash fare.  The speedy drumming is physically impressive. But it’s still certifiably thrash.

It doesn’t have the fairly catchy melody or the dynamic breakdown of that Kreator track we included with TheMadIsraeli’s review, and of course it’s unlikely Fastkill will have a career nearly as long as Kreator’s. So what’s grabbing me about the song? Maybe it’s the raw, cheese-free, garage-band quality of the music and the unadulterated speed. But honestly, I’m not sure. All I really know is that I think it’s worth passing along, so here it is: 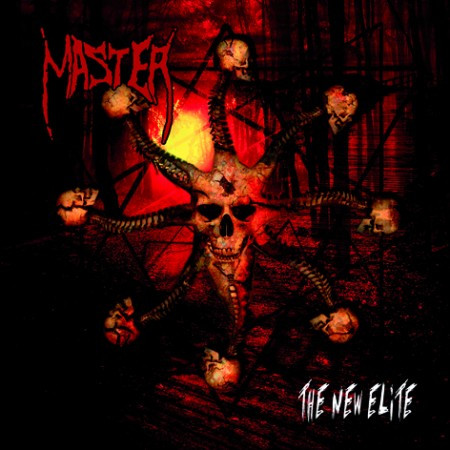 Master isn’t really a thrash band, of course. But although more properly classified as death metal, the new song I heard from their 11th (!) studio album is definitely on the thrash-heavy end of death, which I suppose is true of this band’s sound in general.

And yes, I have to confess that although Master was one of the original driving forces behind death metal and one of the few progenitors of the genre who are still very much alive and kicking, I’ve never listened to a Master album from start to finish. I have no excuse.

The new album is called The New Elite, and the new song (actually, it’s been streaming for several months, but it’s new to me) is called “Smile As You’re Told”. As noted, it definitely incorporates the speed, guitar patterns, and drum rhythms of thrash, and it includes a burst of solo shred, but the guitars are tuned lower, they’re more distorted, and the overall feeling of the sound is more ill (as in diseased) than straight thrash. But probably the signal difference is Paul Speckmann’s distinctive voice. His mid-ranged, throaty gurgle vomits up the lyrics in a way that pushes the music out into a landscape of freshly turned graves.

Honestly, I don’t think I could make a straight-faced argument that this music is more distinctive than standard thrash or less likely to become dull if all the songs were cast in the same mold. But I do enjoy it more, so maybe there’s no explanation other than taste?

Your thoughts about the subject matter of this post would be appreciated, especially since my own are so muddled.

4 Responses to “THRASHING: FASTKILL AND MASTER”