“Obfuscâre Veritas”, the first song now up for streaming from Apocryphal Parabolam, the new album by Kentucky’s Klexos, is dissonant and deranged, twisted and ever-twisting, brazen and brawling — and generally berserk. The vocals display a lot of harrowing dynamism as well. The song exhibits impressive technicality, which is necessary, given how wildly and rapidly the music veers and careens. It will also give you a vigorous beating, which you probably deserve. END_OF_DOCUMENT_TOKEN_TO_BE_REPLACED 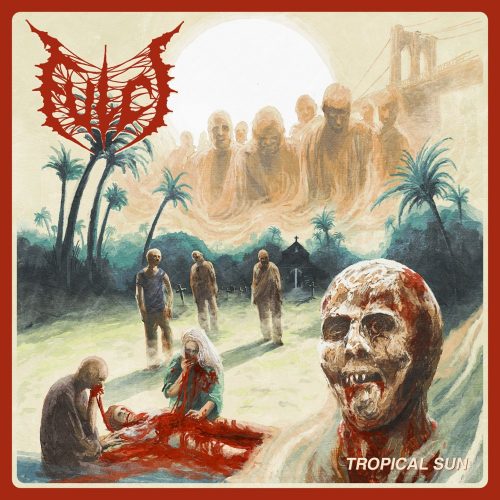 The particular brand of horror that inspires the Italian death metal band Fulci is disclosed in their name, chosen in honor of legendary Italian director Lucio Fulci, “The Godfather of Gore”, whose filmography includes “City of the Living Dead”, “The House by the Cemetery”, “The Beyond”, “The New York Ripper”, “Zombi 2”, and more. They also honor the director’s trademark graphic violence in their music, which is obliterating and eviscerating.

In 1979, Lucio Fulci achieved his international breakthrough with “Zombi 2“, a violent 1979 zombie film that was marketed as a sequel to George Romero‘s “Dawn of the Dead”, which was known internationally as “Zombi”. Fulci‘s film tells the story of a Caribbean island cursed by voodoo, whose dead residents rise as zombies to attack the living. It’s that film, “Zombi 2”, which became the basis for the latest record by Fulci (the band), a concept album called Tropical Sun that was released this past May by Time To Kill Records.

What we’re bringing you today is an official video for a track from Tropical Sun called “Legion of the Resurrected“. The video has a distinctively ’90s look, and is based on a representation of a corpse-raising voodoo ritual. END_OF_DOCUMENT_TOKEN_TO_BE_REPLACED