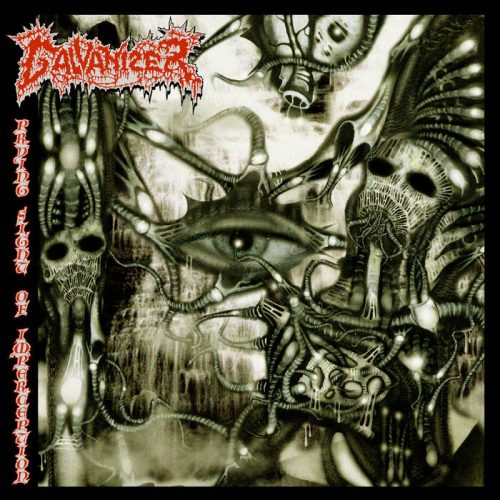 Three years ago we had the ghoulish pleasure of premiering the debut album of the precocious Finnish death metal band Galvanizer, summing it up as “a full-throttle, titanically toned barrage”, with each compact song delivering “an electrifying death/grind rampage, each one spliced with grooves”. As we wrote then, “the music rips, romps, and pounds, and sometimes (but not often) it drops into a grisly, staggering lurch,” with the whole affair draped in “a morbid mantle of horror”.

Sanguine Vigil was indeed hellishly impressive, and so is their full-length follow-up, Prying Sight of Imperception. It’s so impressive that Me Saco Un Ojo and Everlasting Spew have again teamed up to release it, as they did the debut album, and so impressive that we’ve again signed on for a premiere in advance of the July 26 release date. Today’s revelation is “The Ever-Crescent“. END_OF_DOCUMENT_TOKEN_TO_BE_REPLACED 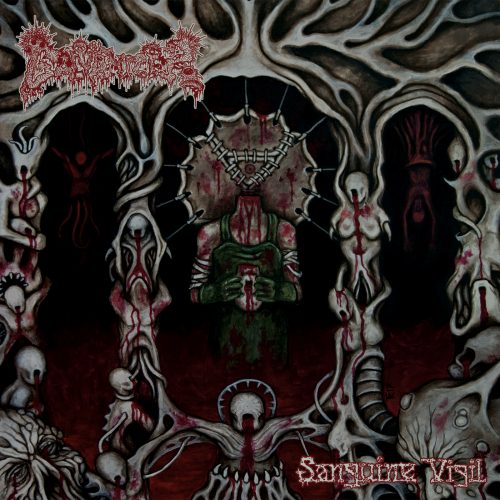 Let us speak first of the tones of the music on Galvanizer’s debut album, Sanguine Vigil, because they are so delicious. Two of them are prominent.

The first is the deep, gut-rumbling, smoke-spewing, chain-sawing grind of the guitar. You know that tone. It sounds as if you could set the speakers next to a block of concrete and watch with a smile as the music vibrates it into a pile of gravel. You might also imagine it sending a web of fine fractures through your skull, like the appearance of a windshield that’s been crazed by an errant rock kicked up from the highway in front of you.

The second prominent tone in the music is the snap and crack of the snare drum. It’s as sharp and hard-edged as the guitar tone is murky and corroded. It sounds like an ax biting into wood, or the rapid fire of a handgun. END_OF_DOCUMENT_TOKEN_TO_BE_REPLACED

If you’re a dyed-in-the-wool metalhead, you gotta love the title of this song. The band’s name is definitely well-chosen, too; it’s a completely fitting description of what their music does to your nervous system. And that album art (which is a bit Demilich-esque, and for good reason) is going to catch some eyes as well. In other words, this is an enticing package for sure.

But even better, the song itself is a killer.

What we have for you is the premiere of “Mood For the Blade“, the first single to be released from Sanguine Vigil, which is the debut album of the Finnish death/grind band Galvanizer. It’s set for a February 28 CD release by Everlasting Spew Records, with a vinyl edition coming later this year via Me Saco Un Ojo. END_OF_DOCUMENT_TOKEN_TO_BE_REPLACED