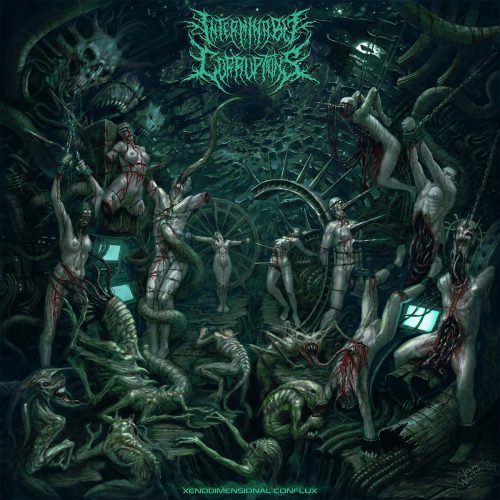 Back in 2016 while doing my top BDM albums list, I stumbled upon a band called Anomalistic (from Basil) who had released their sophomore album, Human Decimation, via Reality Fade Records, an up-and-coming BDM label based in Ukraine. That album ended up in my top 50 and I got the chance to meet (at least on FB) the owner of the label, Dimitry (a nice dude with an extensive knowledge in BDM). From that time on, I’ve been on the lookout for future Reality Fade releases.

Either at the end of 2016 or the beginning of 2017, the label announced the release of the Coprobaptized Cunthunter EP (a marvelous release) and Interminable Corruptions’ debut album, Xenodimensional Conflux.  I was not familiar with Interminable since they are a new band that had formed back in 2014 and had only released a demo and a split. Some lineup changes occurred before their full-length release, and who they now have as a vocalist is none other than Mr. Paolo Chiti (Ex-Putridity, Devangelic, and Antropofagus) — simply one of the best BDM frontmen!!! Everyone who is into the genre knows this name, and he is well-respected. END_OF_DOCUMENT_TOKEN_TO_BE_REPLACED