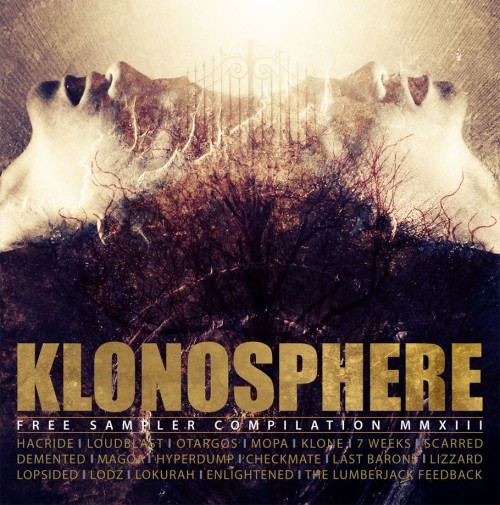 Thanks to a tip from KevinP, I learned this morning that the French label Klonosphere has recently released a free sampler of music from 18 different bands. I’m an enthusiastic fan of many of the bands on this compilation, including Hacride, Klone, Lokurah, Magoa, and Otargos, all of whom we’ve written about at NCS. I’m not familiar with other bands, but the chance to discover new music is one of the reasons why samplers like this one are worth having. And just based on the music I do know, this is a really diverse collection of sounds.

Many of the songs previously appeared on recent albums or EPs, and some are being released for the first time on this sampler — including exclusive demo versions of tracks that will appear on albums projected for release later this year. One of those advance demo tracks comes from a long-running French band named Loudblast who we last visited at NCS all the way back in April 2011 (here). I liked what I heard of them then, and so I was especially interested in the chance to check what they’re up to now.

They’ve released six studio albums to date, and based on the description of this new demo track, it appears their seventh is on the way. The new song is entitled “The Abstract God”, and it’s a beefy, malicious death metal monster that stomps, rips, roars, and wails like a tormented spirit. It’s prime headbang material, so loosen up your neck muscles and stream it right after the jump. END_OF_DOCUMENT_TOKEN_TO_BE_REPLACED