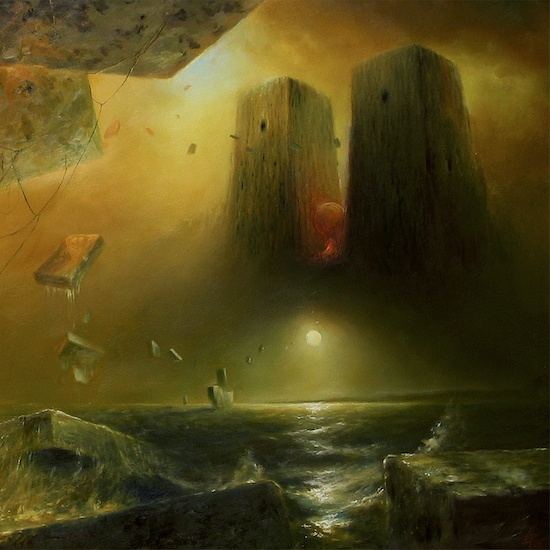 Berlin-based Lares made a striking first impression with their 2017 debut release, Mask of Discomfort. Induced to explore it by a description that recommended the music “for people who like dark doomy and sludgy riffs with a touch of black metal covered in clouds of psychedelics”, what we found was a big juggernaut of sound that took us on a hellish road trip, with slower detours that were both staggeringly crushing and nightmarishly hallucinatory, and the music proved to be melodically memorable as well.

We’re told that since then Lares embarked on a new path of evolution that began in late 2018 with the formation of their current lineup, and that path led them to the creation of a new album named Towards Nothingness (adorned by the distinctive artwork of the great Polish painter Mariusz Lewandowski), and to a partnership with Argonauta Records, who will release the record on June 20th.

We have been eager to learn where the journey of Lares has taken them, and now we can share with you a signpost, a stunning first track from Towards Nothingness entitled “Grey Haze“. END_OF_DOCUMENT_TOKEN_TO_BE_REPLACED

Three years ago At the Gates returned with their first new studio album in 19 years. The reception seems to have stoked the fires even further, because they’ve written 11 new songs that they plan to begin recording soon. And according to their announcement from earlier this week, they are feeling “more inspired than perhaps ever before”. They also allege that the new record will be “by far the most comprehensive album of the band to date, and will span all the way across the different elements of the band’s sound”. END_OF_DOCUMENT_TOKEN_TO_BE_REPLACED