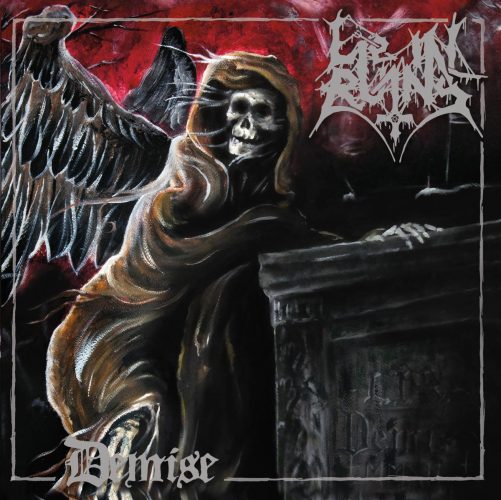 When I learned that Dark Descent Records would be releasing a new EP by the Finnish death metal band Lie In Ruins, I had one of those wide-eyed, take-a-big-gulp moments you get when the unexpected hits you like a piece of lumber on the back of the neck. In other words, it was a big surprise — but in this case a very welcome one. And then the waiting began, to find out exactly what these men had done with their time away from the studios.

Four years have elapsed since this band’s last album, Towards Divine Death, which was very good (and if you haven’t heard that album, quit screwing around and get your butt over here sometime soon). This new EP, Demise, is also the band’s eighth release overall in a career that began in roughly 1993 under the name Dissected, halted for many years after a few rehearsal tapes were recorded, and then resumed for real in about 2002.

What we have for you today is a full stream of Demise a couple of weeks before the official release date. Rather than a collection of clearly segmented songs, it is instead presented as a single track nearly 29 minutes in length. And I do believe it’s the best thing this band have ever done. END_OF_DOCUMENT_TOKEN_TO_BE_REPLACED

“You may not have heard of this band, but doubtless you will be doing so more in the future. With a fresh take on the death metal dynamic, this, their debut album, provides a master class in modern death metal, shot through with unusual progressive impulses. . . . The playing throughout is deft and highly skilled, without veering into territory one could describe (often dismissively) as “tech”. While there is no doubt some complex fretwork going on here, it’s always done in service to the song and as part of an overall pattern of interlocking riffs, woven together seamlessly. Drums clatter and pound with impressive force, eschewing the simple blast-blast-blast approach in favour of punchy, jarring kick patterns and sharp, hammer-blow snare-beats, while the vocals favour a tormented, guttural howl that successfully captures an all-too-human sense of rage and despair, making a rare emotional connection with the listener.” END_OF_DOCUMENT_TOKEN_TO_BE_REPLACED

It was a good sign when the tremolo drilling and drum blasting started, and the jolting rhythms plus Bruce Fitzhugh’s bestial vox sealed the deal. This is neck-wrecking, riff-hammering Living Sacrifice in prime form. Listen next (via Rolling Stone). END_OF_DOCUMENT_TOKEN_TO_BE_REPLACED