After the interview, also check out the video for the first single for the album, a track named “The Killshot“. END_OF_DOCUMENT_TOKEN_TO_BE_REPLACED 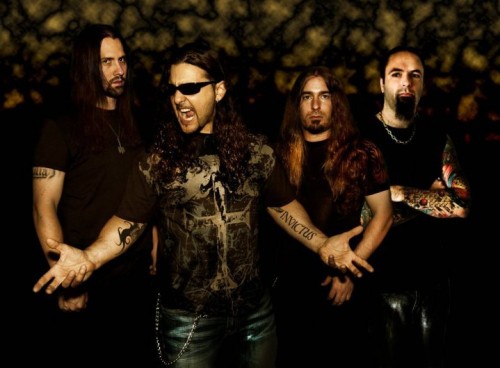 Anyone who’s listened to metal for very long has a mental list of bands whose new albums they’ll buy sound unheard. For us, Montreal’s Kataklysm is one of those bands. They’ve also been putting out albums for almost 20 years, which means that most diehard metalheads already know whether Kataklysm is their thing or not. But honestly, it’s hard for us to imagine any fan of extreme metal not liking the band’s latest release, Heaven’s Venom. It’s a fucking barn-burner.

It doesn’t represent any kind of seismic shift in Kataklysm’s brand of death metal, but that’s part of the band’s appeal. They have a distinct sound that they’ve stuck with and honed over time like the veteran pro’s they are, and their albums also reliably include a few songs that step outside the band’s dominant territory to keep things interesting. In other words, you know what you’re going to get, and when it’s as good as the franchise Kataklysm has built, that’s just fine.

Everything on Heaven’s Venom is big and powerful: Big-assed, sawing riffs that generate industrial-strength, nail-driving rhythms; those “northern hyperblasts” shot from the drumkit like a cloud of angry hornets; dramatic melodies; and Maurizio Iacono‘s distinctive, passionate, grizzly-bear roars giving voice to powerful lyrics that you can actually hear.

Once again, Kataklysm has produced an irresistible onslaught of powerful grooves and dark melody, fist-pumping anthems and mosh-pit missiles, and enough variability in the pacing and instrumentation to make Heaven’s Venom an album worth hearing from start to finish.  (more after the jump, including a track to hear . . .) END_OF_DOCUMENT_TOKEN_TO_BE_REPLACED