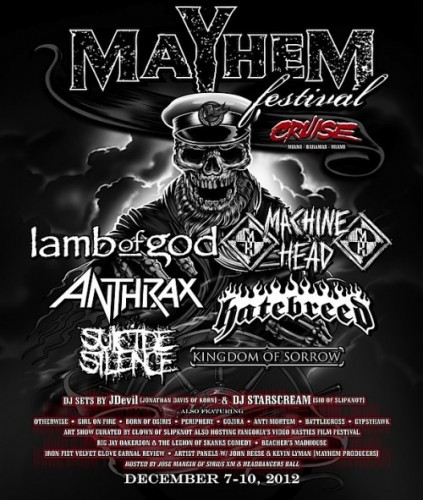 What the fuck is it with this metal cruise phenomenon? First there was 70,000 Tons of Metal. Then came the Barge To Hell. And now we have the 2012 Mayhem Festival Cruise, as announced by a just-released video trailer.

NCS reader, heartless commentator, and sometimes writer KevinP has been riding my ass mercilessly about signing up for the Barge To Hell, especially since I foamed at the mouth about the line-up in this post. I’ve been sorely tempted, restrained only by the need to figure out how to explain to my non-metalhead wife that I plan to desert her for a week of partying on the Caribbean with a bunch of loose women and KevinP.

But now, things have gotten even more complicated: The Barge To Hell is scheduled to return to port in Miami on December 7, and December 7 is when the Mayhem Festival Cruise departs Miami. Maybe the timing would work out so’s I could stagger off one ship and stagger right onto the next one for another 4 days of getting massively fucked up by metal and alcohol, and being molested by more loose women!

It’s damned tempting, because Gojira is the headliner.

Actually, they’re not being billed as the main attraction — though they should be. Instead, the main attractions are Lamb of God, Machine Head, Anthrax, Hatebreed, Suicide Silence, and Kingdom of Sorrow. There are other bands, too, though to be brutally honest, which is the only kind of honest we know how to be at NCS, I’m mainly interested in Gojira and Battlecross. END_OF_DOCUMENT_TOKEN_TO_BE_REPLACED