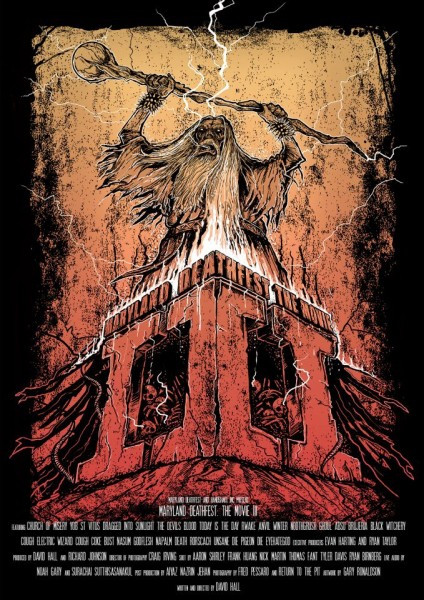 What you are looking at above is the just-released poster for Maryland Deathfest the Movie III, with artwork created by Bite Radius Designs of Nottingham, England. May I say that it’s fuckin’ sick? Why yes, I believe I just did.

And yes, there will indeed be an MDF the Movie III, though it will be the last MDF movie (or at least the last one by talented filmmaker David Hall). If you have a long memory, you may recall reading back in 2011 (here, for example) a statement by Hall that his footage of MDF 9 (2011) would never see the light of day, in part because Hall was getting screwed over by an ex-business partner and the partner’s associates who were holding much of the footage hostage.

It doesn’t appear that this situation ever got resolved — Hall stated on the Handshake Inc. Facebook page in January that although he had salvaged film of 8 bands, “the rest of the footage from MDF 9 was irretrievable and thanks to the herpetic piece of human garbage who stole the rest of the footage, neurosis, voivod, orange goblin, in solitude and countless others won’t be in the film.”

However, in addition to the footage that Hall did salvage from MDF 9, it appears the MDF III movie will also include footage of performances from MDF 10 in 2012. END_OF_DOCUMENT_TOKEN_TO_BE_REPLACED