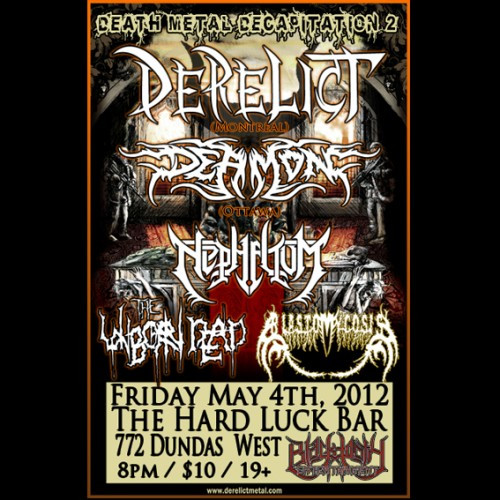 In celebration of yesterday’s fifth annual Record Store Day, various people have made metal available for free download. For example, the organizer of the Death Metal Decapitation 2 festival in Toronto (scheduled to explode on May 4), Blacktooth Entertainment, has put together a free compilation of music from extreme bands who will be playing at the fest. The line-up includes Toronto’s Nephelium, an excellent band who we’ve previously featured at NCS. The comp includes two songs from Nephelium’s new album, Coils of Entropy.

Also on the comp are two tracks from a Montreal band named Derelict, who are also excellent (and we’ll be reviewing their new release, Perpetuation, shortly). We haven’t yet explored the music of the other bands on the comp — Deamon (Ottawa), The Unborn Dead (Toronto), and Blastmycosis (Toronto) — but this comp will make it easy to do that. To stream the music and download it for free, use this link:  http://blacktoothmay4.bandcamp.com/

But wait, there’s more! Free music from The Neologist and Dreaming Dead . . . after the jump. END_OF_DOCUMENT_TOKEN_TO_BE_REPLACED

Having said all that, please feel free to leave Comments and tell all of us what I missed when I put this list together. Let us know about albums on the way that  you’re stoked about, even if you don’t see them here! END_OF_DOCUMENT_TOKEN_TO_BE_REPLACED 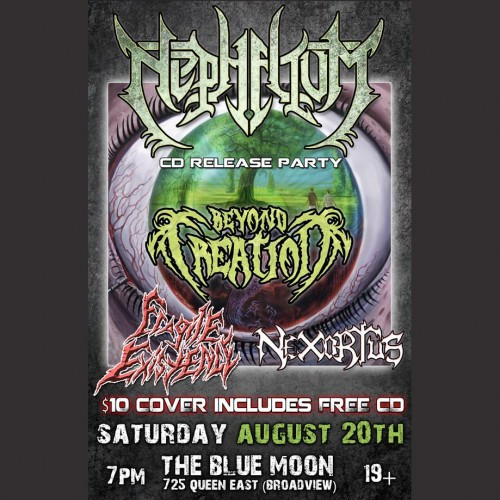 I just like everything about the way this is being done, but most especially, I like the idea of offering a free digital comp to promote a metal show — one song from each band. IMHO, the same idea would work just as well for tours, too. In addition to helping spotlight the show, it also uses the show to help introduce fans to the bands’ music. (more after the jump . . .) END_OF_DOCUMENT_TOKEN_TO_BE_REPLACED