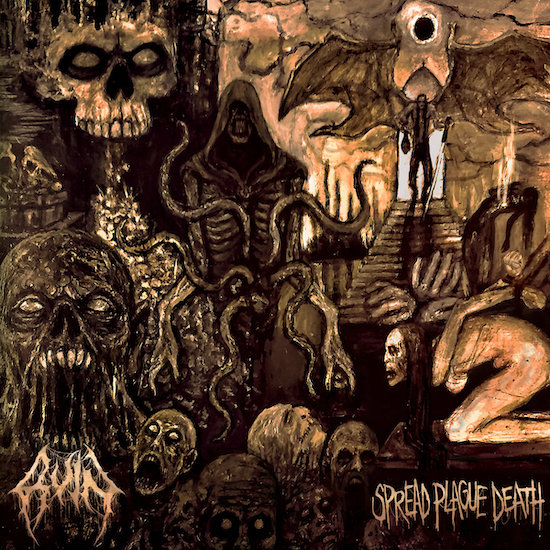 For those familiar with the previous recordings of the California death metal band Ruin, it will come as no surprise that their new album Spread Plague Death is ruinous — ruthlessly unapologetically ruinous, in multiple ways. It’s titanically crushing, subhuman in its savagery, grotesquely filthy in its sound, and unrelenting in its devotion to building a macabre atmosphere of mutilating depravity and horror. It also happens to be perversely contagious and neck-wrecking as well as sadistically grotesque.

The band’s success in creating such tremendously obliterating destructiveness coupled with so many blood-congealing terrors, and doing so over the course of more than 44 minutes without overpowering a listener’s endurance isn’t a matter of happenstance but of calculation. It’s a testament to the band’s songcraft and an attention to detail that might not be expected, given how steadfastly brutal, morbid, and maniacal their strategies are.

You’ll have a chance to discover this for yourselves, assuming you’re not faint of heart, because we have a full stream of the album for you, just a few days away from its August 27 release by Nameless Grave Records and other allied labels. END_OF_DOCUMENT_TOKEN_TO_BE_REPLACED

This cult of deviants is back with a nastier and grimmer offering, which is impressive, as I really loved Human Annihilation. These miscreants deliver the kind of dense heaviness they are known for, but this time around the songwriting has more attention to detail and the playing is more musical with actual guitar melodies wallowing in the murk. END_OF_DOCUMENT_TOKEN_TO_BE_REPLACED 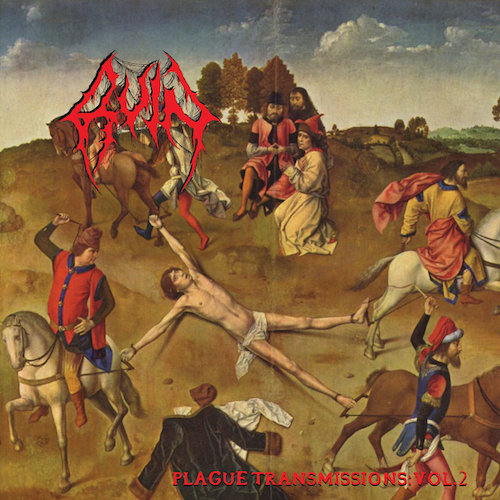 The California death metal band Ruin released their first demo in 1991, and then nearly a quarter-century later they revived and re-formed. Since 2015 they’ve released two albums (Drown In Blood and Human Annihilation), but a much greater number of short releases, including EPs and splits. They’ve gotten into the habit of periodically releasing compilations that collect these shorter works, and the latest of those is what we’re bringing you today.

Plague Transmissions: Vol. 2, which will be released by Horror Pain Gore Death Productions on July 24th, collects Ruin tracks from a 2018 EP (Into Endless Chasms), a 2018 split with Anthropic, a 2019 EP (Death Tomb), a 2020 split with Abysme (Rotting Madness), and a 2020 EP (Infested Death) — 18 tracks at all. And a more vile and ghastly administration of obliterating punishment you could hardly imagine. END_OF_DOCUMENT_TOKEN_TO_BE_REPLACED

To begin, I’ve chosen Track #5 from the upcoming Human Annihilation album, which is the forthcoming second full-length by the California death metal band Ruin. Their debut album Drown In Blood from last year was a ravaging implement of sonic torture, and it sounds like this one will be quite good as well. END_OF_DOCUMENT_TOKEN_TO_BE_REPLACED