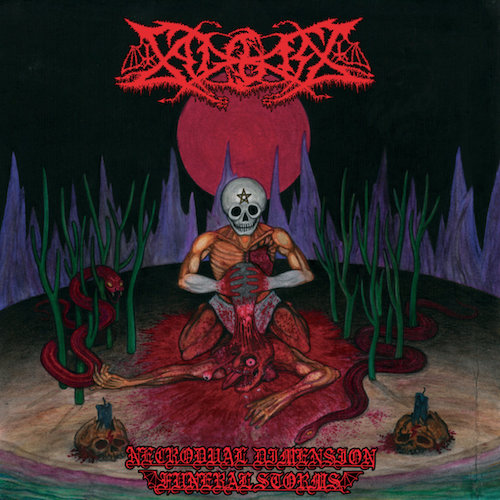 In many of their outward trappings, Sadokist come across as a crude-and-rude, foul-and-filthy, hell-blazing band of blasphemous barbarians. And yeah, they really are all that. “Evil Sado Fuckin’ Speed Metal of Death!!!” is their mantra, and those aren’t empty words in their case. But one listen to the song we’re premiering today is convincing evidence that these Finnish devils are much more nuanced and diabolically dynamic songwriters than the most superficial trappings might suggest. Their songs are meant to electrify the senses, but a lot of the undeniably high voltage derives from how much they pack into each track.

The song we’re presenting today, “Driven By Disgust“, is one of nine tracks on Sadokist’s shit-hot second album, Necrodual Dimension Funeral Storms, which follows 2014’s Thy Saviour’s Halo, Held by Horns. It’s set for release by Hells Headbangers on August 30, on CD, LP, and tape. END_OF_DOCUMENT_TOKEN_TO_BE_REPLACED

Andy Synn wrote a special three-part review (collected here) for Triangle, the new album by Schammasch, calling it “a true triumph of ambition and creativity”: “[A]ny listener who embraces the experience of Triangle on its own terms, with their eyes, their ears, and their mind open to the spiritual signals it transmits, will find their decision rewarded ten-fold.” END_OF_DOCUMENT_TOKEN_TO_BE_REPLACED