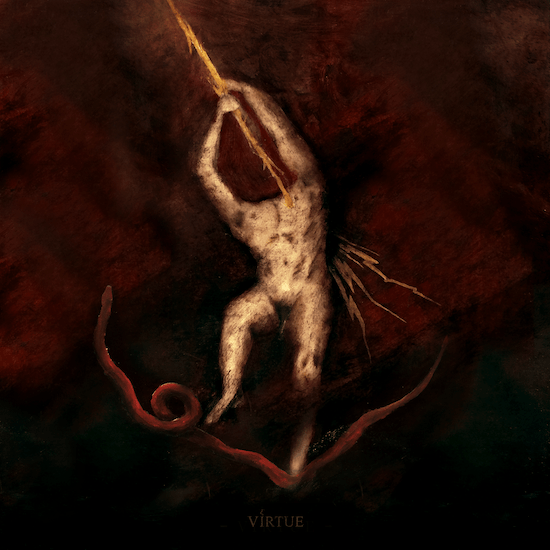 The Venezuelan black metal band Theurgia, now based in Bogotá, Colombia, has already built an impressive and continually ambitious and improving discography that consists of a 2015 EP (Anti perpetuo), a 2017 debut album (Transformation), and a 2020 split with Hacavitz and Veldraveth (Tercer nadir venenoso). Theurgia is now adding to those impressive records with a second full-length entitled VIRTUE, which will be released in mid-January by the Mexican label Vomit Records.

Trying to succinctly sum up Theurgia’s evolving music isn’t an easy task, but at a high level we can say that it has succeeded in creating haunting and disturbing occult atmospheric sensations and coupled those with viscerally powerful and significantly heavy rhythms and frighteningly impassioned vocals. The music is relentlessly dramatic, formidably savage, and immersive in its effects.

Those qualities (and others) come through again in the song we’re premiering today from VIRTUE, via a lyric video. Its name is “Irradiant“. END_OF_DOCUMENT_TOKEN_TO_BE_REPLACED

Yes indeed, a new Witchery album only one year after the band re-grouped to put out In His Infernal Majesty’s Service to commemorate their 20th anniversary. And this new one features the same line-up that recorded that last album — drummer Chris Barkensjö, guitarists Jensen and Rickard Rimfält, bassist Sharlee D’Angelo, and vocalist Angus Norder. Apparently, they were so delighted with response to In His Infernal Majesty’s Service that they dived right back into writing more new songs. END_OF_DOCUMENT_TOKEN_TO_BE_REPLACED