For those of you who may only now be discovering Throane for the first time, it is the solo project of Dehn Sora, whose name will be familiar to many as the visual artist whose creations have adorned the covers of albums by a multitude of well-regarded bands. Because he is a graphic artist and designer, and a collector of vinyl records himself, the visual presentation of Throane’s music in its physical packaging is inseparable from the sound. And so the conception of Throane’s new EP Une Balle Dans Le Pied (which will be released on October 16th by Debemur Morti Productions) was as much rooted in an image as it was in an imagining of the sound, and thus there are multiple layers of meaning to be found here.

The EP’s title translates to “a bullet in the foot”, a French expression symbolizing the act of sabotaging oneself. The cover image depicts Sora’s sister, a choice that recalls previous releases in which Sora has featured individuals close to him, with a personal symbolism. He explains: “Working as a nurse in different services, her daily routine makes her face death, addicted personalities, terminally ill people. Walking through their homes, their souls. Walking on broken glass. But forced to get rid of it, at the end of every day. To stand still. And keep walking.”

But the image is ambiguous. Sora again explains: END_OF_DOCUMENT_TOKEN_TO_BE_REPLACED 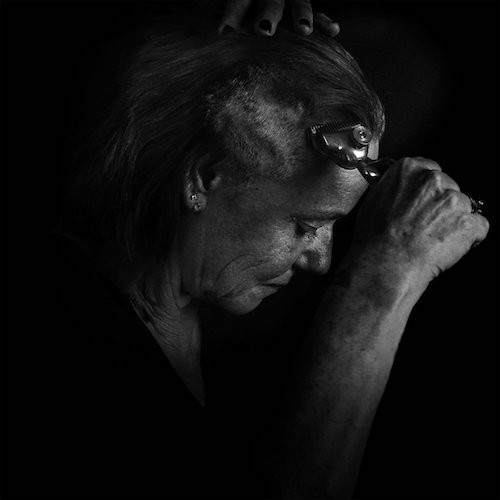 Almost one month ago we assisted in presenting the first excerpt from Plus Une Main A Mordre (“No Hand Left To Bite”), the second album by Throane, which is the musical alter ego of French photographer, illustrator, designer Dehn Sora, whose visual creations have accompanied albums by the likes of Blut Aus Nord, Ulver, Deathspell Omega, and many others. The album will be released by Debemur Morti Productions on October 20, and today it’s our pleasure to reveal the title track, which ends the album in stunning fashion.

Dehn Sora composed the music on the album and created all of the sounds, with the exception of the staggeringly powerful drumming of Gregoire Quartier of Cortez and the spectrum of voices you will hear on the song we’re premiering today, for which credit is due to Throane’s guests Colin Van Eeckhout (Amenra), Sylvain (Incivil Tragedis), and French graphic designer Valnoir. END_OF_DOCUMENT_TOKEN_TO_BE_REPLACED

Great lashing storm gales of guitar sound assault the senses. The pulse of the drum and bass sound erratic, find a rhythm, stop altogether, detonate in massive eruptions, move in deliberate and ponderous footfalls. The melody looms and swirls, heaves and shimmers. Peals of dissonance flower and subside. A maniacal voice hurls caustic, blood-chilling shrieks through the song’s titanic movements. The effect is dramatic, unnerving, sorcerous.

And those are this listener’s impressions of “Et Ceux En Lesquels Ils Croyaient“, the second track on the second album by Throane that we’re premiering in this post. Entitled Plus Une Main A Mordre (“No Hand Left to Bite”), it will be released by Debemur Morti Productions on the 20th of October. END_OF_DOCUMENT_TOKEN_TO_BE_REPLACED