For those of you who may only now be discovering Throane for the first time, it is the solo project of Dehn Sora, whose name will be familiar to many as the visual artist whose creations have adorned the covers of albums by a multitude of well-regarded bands. Because he is a graphic artist and designer, and a collector of vinyl records himself, the visual presentation of Throane’s music in its physical packaging is inseparable from the sound. And so the conception of Throane’s new EP Une Balle Dans Le Pied (which will be released on October 16th by Debemur Morti Productions) was as much rooted in an image as it was in an imagining of the sound, and thus there are multiple layers of meaning to be found here.

The EP’s title translates to “a bullet in the foot”, a French expression symbolizing the act of sabotaging oneself. The cover image depicts Sora’s sister, a choice that recalls previous releases in which Sora has featured individuals close to him, with a personal symbolism. He explains: “Working as a nurse in different services, her daily routine makes her face death, addicted personalities, terminally ill people. Walking through their homes, their souls. Walking on broken glass. But forced to get rid of it, at the end of every day. To stand still. And keep walking.”

But the image is ambiguous. Sora again explains: 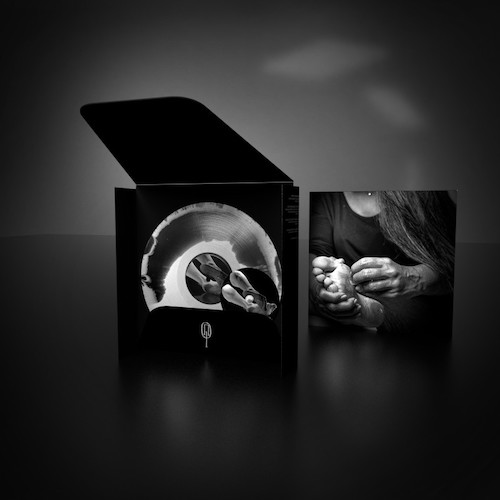 “I see the paradox between the image and the title. In part, the title talks about a self-destructive approach. In another way the image should feel like a cure, a healing process. But not knowing if the picture’s movement shows removing the shattered glass or planting it blurs the interpretation, which I would like to leave to the listener.”

The image was not the first one that occurred to Sora — the other visual ended up as the label disc and artprint image. Obviously, the final cover seemed more fitting for the inspirations of the music, which he has described as “the fruit of a short time, an accumulation leading to the need for explosion.” And perhaps one way to think of the music is both as a reflection on acts of self-sabotage, and as itself a means for removal of the damage, or at least as a step forward on a healing path.

The EP itself has another layer that should be mentioned before we turn to the sounds: On the CD edition the song unfolds as a single track, but it is separated into two tracks for the vinyl format. Presenting the music in this way, as two different experiences, was itself a kind of experimentation, much as the music itself is (Sora has described it as “exploring the language of rhythm and forming a bridge for future full-lengths”).

The song has an immediate visceral impact. The bass-and-drum combination is tumultuous but creates a primal kind of connection with the listener, while the surrounding sound is abrasive and tension-inducing. As the rhythm changes, becoming less frantic, the music squalls and wails, moans and cries out in a semblance of agony and despair. There’s a subsidence in those unnerving sensations, and we seem to become surrounded by a flickering mist, even as the rhythms remain compelling.

The tones peal and reverberate like mutated chimes in the midst of punishing blasts of sound, and drift away in the shimmering of celestial ambient seas as the rhythms vanish. Yet as mesmerizing as that experience is, it also creates a sense of foreboding. And what follows is a sequence of startling explosions, and a feeling of boiling madness that becomes increasingly immersive, submerging the listener in long groaning undercurrents, strange shining filaments of dissonance, and tortured screams. The permutations are unpredictable and unnerving — even the booming rhythms don’t seem to provide much stability.

The music continues to transform, both softening and becoming thunderous, manifesting hallucinations and creating visions of towering calamitous grandeur, jarring the listener with savage sonic assaults and blaring pain with shuddering intensity. Throughout all these riveting but chilling alterations in an aural kaleidoscope, the rhythms retain their punch and power. They change too, creating an intriguing interplay with everything else that’s happening.

Described by the label as “a dangerous mixture of Black Metal, Doom, Dark Ambient, Noise, as well as Industrial soundscapes”, the song does indeed seem to force the listener directly into their own inner torment, in a way that’s fascinating as well as harrowing and cathartic. 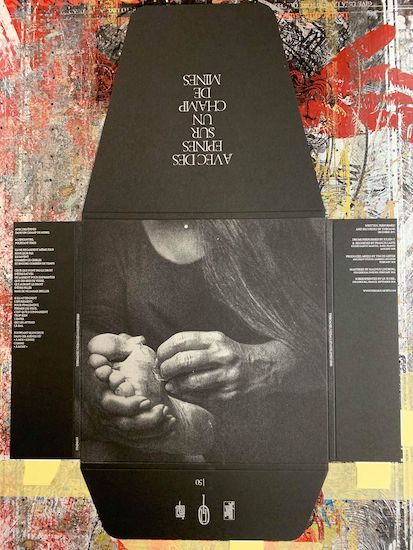 The vinyl edition of Une Balle Dans Le Pied will come in a silk-screened hand-printed sleeve with a black/silver merge heavy 7″ vinyl, as well as in a CD edition (with download cards). Dehn Sora explains: “The idea of having a silk-screened case came naturally to me. The thin and vulnerable aspect of silk-screen printing made absolute sense for this release”.

All the editions are available for pre-order now: